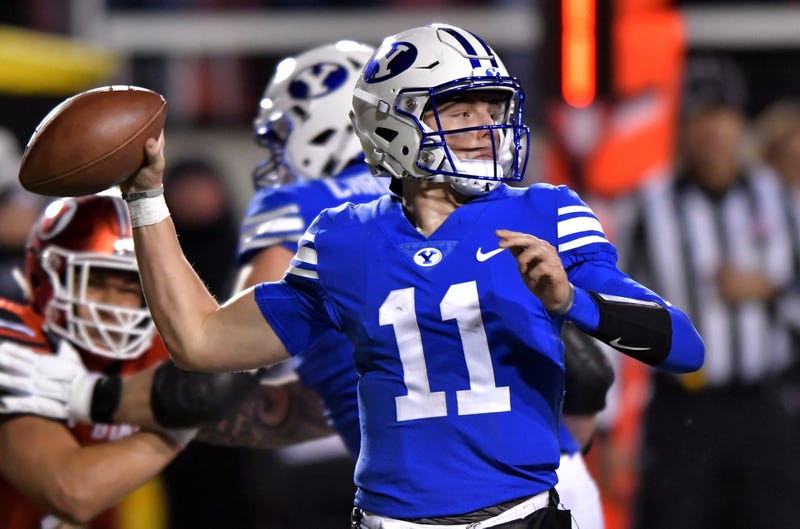 The consensus around the NFL is that the New York Jets will select BYU quarterback Zach Wilson with the No. 2 overall pick in this year's draft, and move on from the incumbent Sam Darnold.

Brady Quinn wants to pour some cold water on that draft strategy.

The former first-round draft pick and current Fox Sports football analyst joined the Tiki and Tierney show on Tuesday to discuss his quarterback prospect rankings, and expressed some doubt about Wilson's overall potential.

"Everyone's kind of jumped on the Zach Wilson bandwagon," Quinn said. "Look, I think he can be a fine quarterback. He's got really unique, special arm talent with the way he can flick his wrist. It's almost Aaron Rodgers-esque with the way he can really not do much with his arm but just flick his wrist and the ball jumps out of his hand. He's a good athlete. But, the schedule [BYU] played... If you go back to his 2018 and 2019 seasons -- and look, I know he was dealing with a shoulder injury and hand injury in 2019 -- nothing really jumped out.

"He was inconsistent, wasn't consistently accurate, wasn't overly dynamic. I mean, if you look at the stats, that's all part of the story, too. And then you see this monumental jump -- this year he throws 30 touchdown passes and only three picks -- one of things I keep looking at is, he's got all day to throw in the pocket. And he's throwing balls in tight windows. But, he's doing it against guys where like, when you talk about 50-50 balls, yeah, if I'm playing USC, when I throw it up, it's a 50-50 ball. But if I'm playing a Group of Five team, that's more like an 80-20 ball. I've got faith my guy's going to come down with it. He was in that situation the entire season...

"I know he's got some special arm talent -- he's fourth on the list to me. I've got [Ohio State's Justin] Fields at No. 2 and [Alabama's] Mac Jones at No. 3. I love Mac Jones, I think he's got all the tools and intangibles to do it. But I think [Wilson] is probably most dependent upon the situation and circumstance he enters into, because he doesn't have that athleticism, that running ability like all the other guys do, to be able to be a part of the running game or take off and really hurt you with his legs."

Wilson, who played 12 games under center for BYU in 2020, finished the campaign with 3,662 total passing yards, 33 touchdowns, and just three interceptions. The 6-foot-3, 210-pound junior also led the Cougars to an appearance in the Boca Raton Bowl, where he completed 26 of 34 passes for 425 yards and three scores en route to a blowout win over Central Florida.

As for Justin Fields, who is ranked two spots ahead of Wilson on Quinn's quarterback rankings list, he played eight games for the Buckeyes this season, tallying 2,100 passing yards and 22 touchdowns along with five rushing scores. The 22-year-old junior also helped lead Ohio State to the College Football Playoff championship game.

According to Pro Football Focus' NFL Draft big board, Wilson is ranked No. 2 overall, with Fields right behind him at No. 3.

The entire conversation between Quinn and Tiki & Tierney can be accessed in the audio player above.