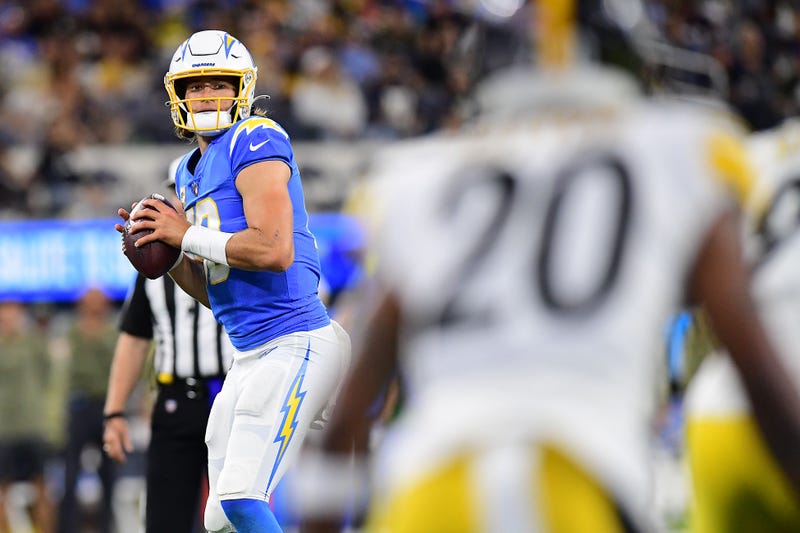 Last season, the Los Angeles Chargers managed to turn crushing defeats into an art form -- they lost five times when leading in the fourth quarter, and lost a whopping seven games by one score. But the team has shed its reputation as late-game chokers in 2021, thanks to their star quarterback, Justin Herbert.

The reigning Offensive Rookie of the Year delivered a clutch performance on Sunday night, throwing for 382 yards with three touchdowns and one pick in the Chargers' thrilling 41-37 win over the Pittsburgh Steelers at SoFi Stadium. Of the team's six wins this season, five have been fourth-quarter comebacks.

"[Herbert] understands that the moment is never too bright for him," Chargers reporter Fernando Ramirez told After Hours with Amy Lawrence on Monday. "In primetime games, he's now 3-1, he's thrown 13 touchdowns and only one interception. When the lights are on, he shines bright. He's mature beyond his years. He understands the moment isn't too big for him.

The Chargers' defense made the game unnecessarily stressful. They allowed the Steelers to rally from a 17-point deficit, and score 27 total points during the fourth quarter. But Herbert was given enough time to earn the last laugh, and he connected with receiver Mike Williams on a 53-yard, go-ahead touchdown with less than three minutes remaining.

Herbert, the sixth overall pick in the 2020 draft, became the first quarterback in NFL history to throw for 380 yards and rush for 90 in a game, according to CBS Sports. He also became the second-fastest quarterback to reach 7,000 career passing yards, reaching the mark in his 25th career game. Through 10 games, Herbert has completed 66.2-percent of his passes for 2,927 yards with 22 touchdowns and eight interceptions.

Los Angeles (6-4), which sits in second place in the AFC West standings, will visit the Denver Broncos (5-5) in a Week 12 matchup on Sunday. According to FiveThirtyEight projections, the Chargers currently have a 72-percent chance to reach the playoffs and a 40-percent chance to win the division.

The entire Chargers conversation between Ramirez and Lawrence can be accessed in the audio player above.