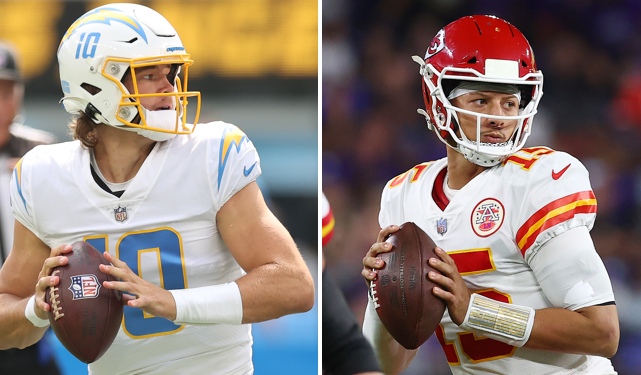 And NFL podcast host Lindsay Rhodes hopes the division rivalry intensifies this Sunday afternoon, when Herbert and the Chargers visit Patrick Mahomes and the Chiefs at Arrowhead Stadium.

"I'm really going to enjoy watching Chargers-Chiefs, I think that's a really fun one," Rhodes told After Hours with Amy Lawrence on Wednesday. "I think we all know what the Chiefs are, everyone's going to come with their best effort against them. I think it'll be a really good test for the Chargers, and I would kind of love to see them win that game.

"I really like this Chargers team, and I really like Justin Herbert. He makes some throws that look like he's a polished veteran, been doing this forever... I'm getting excited about what the Chargers have with him in the future, and I think we could be in for some really exciting AFC West matchups between those two squads. And I'm interested to see if this Sunday is the start of that."

Herbert, the reigning Offensive Rookie of the Year, completed 31 of 41 passes for 338 yards with one touchdown and two interceptions in the Chargers' loss to the Dallas Cowboys last Sunday at SoFi Stadium. Through two games, the 23-year-old owns a 70.5 completion percentage, and has thrown for 675 yards with two touchdowns and three picks.

As for Mahomes -- the 2018 NFL MVP -- he completed 24 of 31 passes for 343 yards with three touchdowns and one interception in the Chiefs' thrilling Week 2 road loss to the Baltimore Ravens. The three-time Pro Bowler remains the favorite to win his second MVP, according to the William Hill Sportsbook.

Los Angeles (1-1) and Kansas City (1-1) are scheduled to kick off at 1 p.m. ET on Sunday. According to FiveThirtyEight's projections, the Chiefs currently have a 46-percent chance to win the AFC West crown, while the Chargers have an 11-percent chance.

The entire conversation between Rhodes and Lawrence can be accessed in the audio player above.