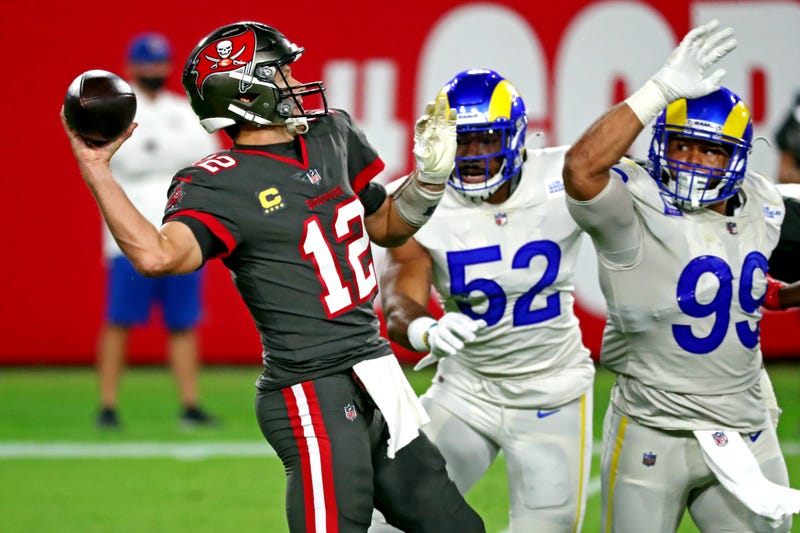 The Bucs' offensive line will be tasked with double-teaming Donald again on Sunday in Los Angeles, and Outkick.com senior NFL writer Armando Salguero is eager to see if Donald -- the reigning Defensive Player of the Year -- will make Brady far more uncomfortable.

"[The Rams] have, arguably, the top-two or three player in the entire NFL in Donald, quarterbacks included," Salguero told After Hours with Amy Lawrence on Thursday. "Even though he doesn't touch the ball every single play on offense, in an offensive-minded league. And he's going to play against who? Arguably the best player of all-time in Tom Brady. The guy who's got more bling than anybody else, and wants more bling to add to his previous bling."

In 2020, the Rams' defense -- led by Darnold in the trenches -- ranked first in the NFL in average points and yards allowed. Although the unit hasn't been as dominant through two games this season, they currently rank eighth in points allowed and are tied for third in takeaways. Darnold is also just 1.5 sacks away from becoming the franchise's all-time sacks leader.

The Rams won't be facing a lesser version of Brady. The 44-year-old remains his old, dominant self, as he's completed 65.1-percent of his passes for 655 yards with nine touchdowns and two interceptions though two games. During last year's matchup, Brady's offense was limited to just 251 total yards.

Los Angeles (2-0) and Tampa Bay (2-0) are scheduled to kick off at 4:25 p.m. ET on Sunday. According to FiveThirtyEight's projections, the Rams currently have a 74-percent chance to reach the playoffs and a 32-percent chance to win the NFC West.

The entire conversation between Salguero and Lawrence can be accessed in the audio player above.