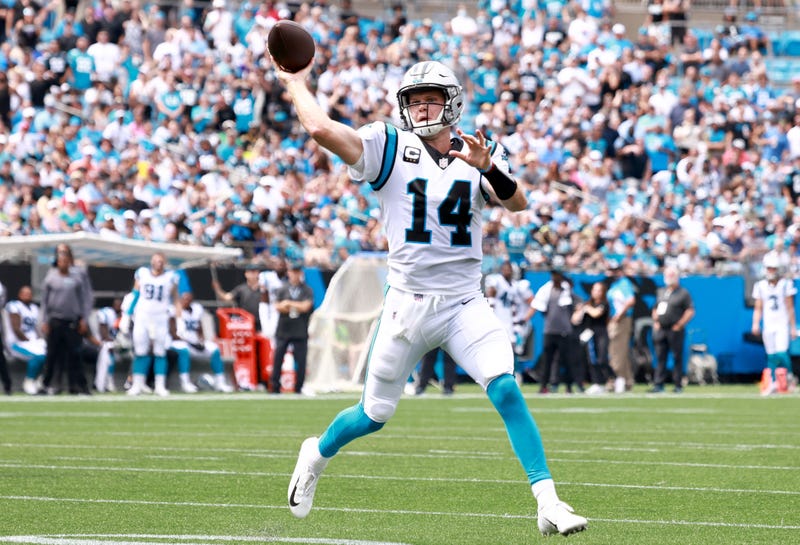 The Sam Darnold redemption tour is certainly heating up. Of course, the year is young -- just two games have been played. But the fourth-year quarterback and Carolina Panthers are 2-0, something Patrick Mahomes, Aaron Rodgers, and Lamar Jackson can't claim.

Aside from the Panthers, only six other NFL teams have started 2-0 in 2021, and except for Jimmy Garoppolo, all of the other quarterbacks have been named to Pro Bowls. Garoppolo, to his credit, came within three minutes of becoming the starting quarterback of a Super Bowl winning team. I believe the San Francisco 49ers' defense and head coach Kyle Shanahan still owe Garoppolo an apology for that loss.

At 2-0, Darnold has already won as many games as he did for the entire 2020 campaign. Not only is his team winning, but his efficiency and productivity is very much on display. He's thrown for three touchdowns and one interception so far -- quite a jump from last year, considering he threw more interceptions than touchdowns. Darnold has posted an impressive 68-percent completion rate in back-to-back games -- neither Rodgers nor Tom Brady can make that claim in 2021. Darnold played in 12 games last season, and accomplished that feat in only one of them.

The New York Jets traded Darnold to Carolina back in April, and consequently selected BYU quarterback Zach Wilson with the No. 2 overall pick this year's draft. Wilson might become a star in the NFL, but his pro career is off to a rough start. The Jets' offense is averaging just 10 points per game, while Darnold has doubled that with Carolina, at 23.

Even if you dive deeper into the numbers and compare the first two games for each of their careers, Darnold drastically outplayed him. The former Jets quarterback had three passing touchdowns to three interceptions in his first two NFL contests. So far, Wilson has two passing touchdowns, and five interceptions. Darnold was also able to muster an average 25 points in his first two career games, compared to Wilson's 10. Darnold went 1-1, Wilson is 0-2.

The further the Jets distance themselves from Darnold, the more and more it seems like the previous three years should be pinned on the franchise, not the quarterback. A quarterback -- often used as a scapegoat -- with a handful of head coaches and offensive coordinators. Not a winning formula for any young quarterback.

Should the Jets have paid more attention? Before Darnold arrived in 2018, the franchise finished with a winning record just once in seven seasons. In the games Darnold missed as a rookie, they went 0-3. That should've been a huge indicator of the positive difference that Darnold can make on the field. Trading a 24-year-old quarterback doesn't seem to be the solution. And fans may forget that both Brady and Rodgers were 24 when they first took over as starters in the league.

Just like Brady and Rodgers, Darnold has been tremendously doubted in his career. No one in their right mind can say Darnold belongs in the stratosphere of those two living legends. But Darnold is playing with a huge chip on his shoulder. He's eager to prove that he wasn't the problem in New York, eager to prove to the Jets that they made a mistake. Did the Jets give up on Darnold too soon? We shall see. But so far, the answer is a resounding yes.