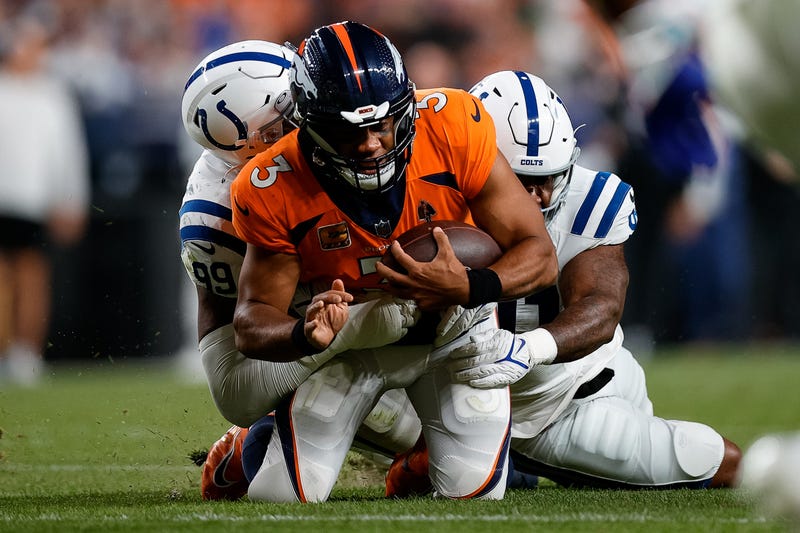 The "Super Bowl or Bust" mentality that Denver Broncos fans embraced after acquiring veteran Russell Wilson felt like an overly optimistic thought process based on desperation. And after a disappointing 2-3 start to the 2022 season, it's now obvious that this Broncos team wasn't just vastly overhyped -- it was also incapable of achieving anything beyond some mediocrity. The misguided cockiness of the fanbase, paired with unrealistic expectations, epitomizes the concept of all sizzle and no steak.

Following the team's embarrassing 12-9 overtime loss to the Indianapolis Colts on Thursday, those in Broncos nation started to play the finger-pointing game. Yes, losing running back Javonte Williams to a season-ending knee injury was a significant blow. And yes, watching left tackle Garrett Bolles go down with a leg injury didn't help, either. But the Colts were without their star running back Jonathan Taylor, and their offense entered the game averaging just 13.8 points per game, the worst mark in the league. If Wilson is really worth the mammoth $240 million contract he got in the offseason, he finds a way to win the game.

While the harsh reality that these Broncos are average, at best, may be more oxygen-depriving than the mile-high altitude in Denver, it's one that'll need to be accepted as the middle of the season starts. Understandably, the Broncos are desperate for any semblance of success, as they haven't appeared in the AFC playoffs since winning the Super Bowl back in 2015. But the combination of red flags that've created bust potential in 2022 have led to a bad situation, where the team could be destined for many more years of failure.

Considering the team went all-in on the likes of Brock Osweiler, Paxton Lynch, and Drew Lock as franchise quarterbacks in recent years, Wilson seemed like a relatively safe bet. One who could serve as a plug-and-play type, and allow the run game and defense to carry the load. Only, at 33 years old and having played 11 seasons in the league, Wilson was a prime regression candidate.

Until Week 6 of last season, Wilson was on a historic run, having started 149 straight games at quarterback -- the sixth-most all-time in league history. The broken finger he suffered against the Los Angeles Rams ended a remarkable stretch that felt destined to end. After all, he's on the smaller side, standing at 5-foot-11, and he also took a beating behind some brutally bad offensive lines.

His spontaneous playmaking ability, elusiveness, and quick decision-making felt less sustainable by the year. Perhaps he and Pete Carroll had discovered the fountain of youth somewhere along their decades-long partnership with the Seattle Seahawks. But, through five weeks, it's obvious who was more crucial to the other's success.

Although Wilson and these Broncos are enduring more scrutiny by the week, Carroll has helped revamp Geno Smith's career, with the Seahawks in playoff contention in an underwhelming NFC West. So much so, that talks of tanking for prime 2023 draft position have been all but stymied. Meanwhile, Nathaniel Hackett's first season in Denver has been an unmitigated disaster -- it appears he may not even survive 17 games.

All of which begs this question: why were these Broncos so hyped-up? Many fans and analysts thought the combination of events in the offseason, paired with a stalwart defense that had no key losses, would find ways to stack wins. Few put them on the same level as the powerhouse Kansas City Chiefs, but in an otherwise open AFC West, the path to competing for a division crown was there. Clearly, this Broncos team is far from being the powerhouse everybody expected them to be. Beating the Houston Texans and San Francisco 49ers at home were struggles, and the Colts proved to be too tall of a task.

Although Hackett's clearly way in over his head in Denver -- and most likely to be scapegoated in this situation -- not even a head coaching change is likely to yield favorable results. The Broncos roster is poorly constructed, and their so-called franchise quarterback in Wilson might never return to peak his form. More importantly, there's undoubtedly divide in the locker room, between the elite defense and "meh" offense. And, the wideouts are getting frustrated with Wilson's misses.

"I could've walked in [to the endzone]," Denver receiver K.J. Hamler explained to reporters after Wilson missed him wide-open near the end zone during the final play of overtime. The combination of television cameras catching Hamler smashing his helmet, couple with his comments after the game, don't exactly indicate a ringing endorsement of Wilson. The inability to hide frustrations has to carry over to meeting rooms, where the mission to determine what's gone wrong includes anger.

Surely, other teams entered this season with championship aspirations, but opted not to openly discuss them. The Broncos felt as though they needed to speak about the hopes, as a source of providing comfort. But, in the end, all it did was place king-sized bullseyes on their backs -- one that so far has created a loud sizzling noise, without any steak in sight.

We strive to be a platform where varying opinions may be voiced and heard. The views, thoughts, and opinions expressed by the author(s) of this article and/or by those providing comments are theirs alone, and do not represent those of Audacy, Inc. We are not responsible for any damages or losses arising from this article and/or any comment(s).
Featured Image Photo Credit: Isaiah J. Downing-USA TODAY Sports