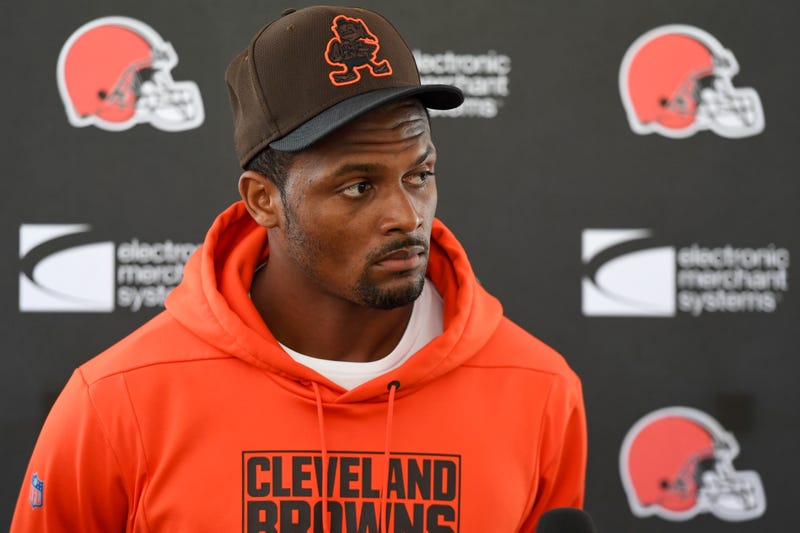 In life, people often leave steady relationships with someone they've become comfortable with in hopes of getting an upgrade of some sort. Sometimes it's looks, and other times elite financial or social status is enough reason to seek an upgrade. Regardless of the motivation, people often realize their decision was made on faulty logic, destined to yield long-term regret. And in the case of the Cleveland Browns, replacing former No. 1 draft pick Baker Mayfield with the talented -- yet embattled -- Deshaun Watson was a move that could haunt the organization forever.

Prior to drafting Mayfield back in 2018, the franchise might as well have been renamed "The Bad News Browns," due to its ineptitude, propensity for losing, and overall incompetence. Between the time when they resumed operations in 1999 and Mayfield bursting onto the scene in Week 3 of the 2018 season, Cleveland went through a whopping 27 starting quarterbacks. That revolving door at quarterback and viral photo of names littered down an old Tim Couch jersey became a punchline for leaguewide jokes.

But things quickly changed when the cocky, arrogant, hard-nosed Mayfield -- who walked on twice during his collegiate career -- arrived into town. He had brought a different swagger that gave off the impression that he was no longer willing to let Northeast Ohio's darling team get bullied every fall.

The gritty mentality epitomized everything the blue-collar, humble fanbase and city was about. And Mayfield's confident persona materialized into on-field success as well, as he led the Browns to their first playoff appearance since 2002 and first playoff win since 1994 -- the year before he was born.

Sure, things weren't perfect, and we saw regression from Cleveland in 2021. But Mayfield was someone who certainly felt capable of providing long-term stability at the team's' most unstable position. His likeable personality, on-field performances, and ability to take the Hollywood stage in commercials, made the organization respectable again. But then, Jimmy Haslam's poor ownership instincts took over, as Cleveland acquired a turmoil-ridden Watson -- instantly signing him to a massive contract extension -- before kicking their loveable darling in Mayfield to the curb.

On the field, Watson's upside was tantalizing to just about everyone. His list of accolades includes three Pro Bowls with the Houston Texans, and he led the NFL in passing yards back in 2020. There's also plenty of tread left on the tire, having played just three full seasons in the NFL. But the dark side of Watson's personality -- something that led to a slew of lawsuits, him missing all of 2021, and an 11-game suspension for the 2022 campaign -- is impossible to ignore.

The headache of dealing with uncertainty about Watson's return to the field, coupled with the public backlash that comes with it, is the last thing Haslam and the Browns needed. Over the years, the team's name, its head coaches, and players have been dragged through the mud enough. Perhaps no one in professional football is in the game to be morally and ethically sound. But the days when fans wore paper bags over their heads could make a return sooner rather than later. And for a franchise that was finally gaining respect, that's a dangerous thought.

"It's important to remember Deshaun Watson is 26 years old and is a high-level NFL quarterback," Haslam said at a team press conference last week.

Maybe Watson has proven to be a high-level quarterback in the league, but the drawbacks of a seemingly combustible situation outweigh the possible benefits. In the short-term, the Browns will be stuck with journeyman Jacoby Brissett under center. In the long-term, Watson's suspension could drag on, and there's no telling what version of him we'll see when he returns to the field. In giving him a mammoth contract, Cleveland took out a $230 million high-risk mortgage, which could also hamper the team for years to come.

And, meanwhile, Mayfield has an excellent chance of reestablishing himself as a starter in Carolina, as the Panthers have a steady foundation with Matt Rhule running the show. In a highly-predictable world, Mayfield would have an outstanding season and make the Browns regret their decision. That scenario doesn't seem unlikely, since the NFC South is weak aside from the Tampa Bay Buccaneers. Plus Mayfield seems to have juice left in the tank, after a much-needed change of scenery.

Seemingly caught up in a bad situation is former NFL Coach of the Year Kevin Stefanski, who's been subjected to harsh criticism by virtue of working with a troubled team. Watson may or may not be the franchise savior who ultimately leads the Browns to a Super Bowl victory. But, between their uncertain future and the massive backlash, Watson sure seems like the one person Cleveland didn't need.