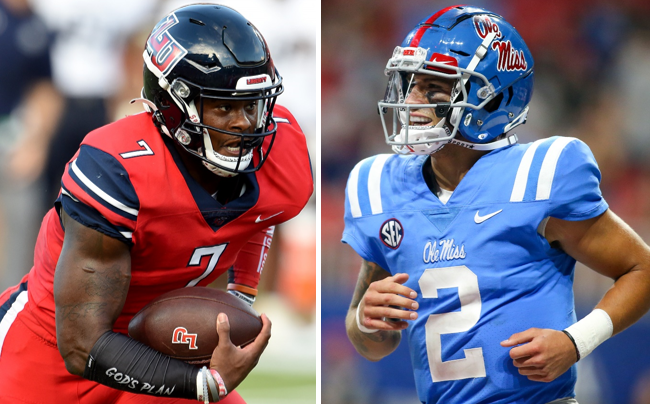 The end of November is typically the time of year when struggling NFL teams and their fans look to the future and potential saviors at the college level, for optimism. But this year, a historically bad quarterback class, coupled with a slew of franchises searching for a signal caller, has created a far-from-ideal market that'll impact teams' strategies the rest of the season.

Back in August, this year's batch of potential first-round quarterbacks didn't look too shabby. Oklahoma's Spencer Rattler and USC's Kedon Slovis were widely viewed as the cream of the crop, with UNC's Sam Howell and Liberty's Malik Willis looking to pick up ground. Fast forward three months, and all bets are off. Slovis and Rattler have been benched in favor of true freshmen, and neither Willis, Howell, nor late riser Matt Corral from Ole Miss, has resembled a top-end talent.

Before general managers ugly cry in their office about the void of quarterback talent (yes, Detroit Lions, I'm looking at you), they should start thinking about viable alternatives at the game's most important position. Rather than banking on drafting a quarterback, more teams ought to consider the veteran route, or giving an extended look at in-house options.

With an increased number of rookie and sophomore quarterbacks prospering early on, the expected learning curve has flattened, all while the leash of patience has shortened. It happens to be the reason why many teams cycle through quarterbacks every few years, as guys hop on and off the evermoving carousel.

There's no exact science for finding a true "franchise quarterback," as they come in all shapes and sizes. The conventional way of finding one is drafting and developing a prospect on an inexpensive rookie contract, but teams also take chances on castoffs, who've fallen out of favor elsewhere. For example, Ryan Tannehill has fortified his spot as the Tennessee Titans' starter, three years after fizzling out with the Miami Dolphins. The supporting cast and organizational fit play significant roles in a quarterback's success, too.

What makes this year's market so unique is that there's a number of teams that could be searching for a new quarterback, creating a draft version of musical chairs. Most notably, Jared Goff, who delivered another subpar showing on Thanksgiving against the rival Chicago Bears, isn't the answer for the winless Lions. Depending on how the 2-9 Houston Texans manage the Deshaun Watson situation, they could also be looking for one. Washington, Atlanta, Carolina, and Pittsburgh could try to get in on the action as well.

Surely, these aforementioned teams have sent scouts to Oxford, Chapel Hill, and Lynchburg to evaluate the incoming crop of quarterback. But relying on any of the players in this year's class would be foolish. None of them are viewed as can't-miss talents, or even likely to develop into a franchise star. Corral, Howell, and Willis will probably need at least a year to develop, which means their best fit is with an organization that already has a veteran in place.

Although Tannehill has reinvented himself with the Titans, the track record for second-phasers elsewhere hasn't been great. This season, Sam Darnold has struggled with the Carolina Panthers, and Teddy Bridgewater is on his third team in as many years. Just like a car that's been taken off the lot and driven for a 10,000-mile joyride, intriguing prospects can lose value quickly.

Still, Tannehill's situation should be a case study for teams in the quarterback market. Surround the player with pieces at skill positions, build up the roster's foundation, and the chances of success increase exponentially. Of course, not every team has a superstar workhorse like Derrick Henry to lean on, but providing a talented supporting cast does wonders for a quarterback's confidence. It's been proven that teams need an above-average quarterback to win games. Viewing a quarterback as the missing piece, as opposed to the centerpiece, would mean they inherit a better situation.

Even though quarterback classes in future years figure to be a lot better, the current circumstances should force teams to adapt their approach. In 2019, the saying was "Tanking for Tua," and last year, it was "Losing for Lawrence." This season, it should be, "Plan for the Present, While Fortifying the Future."