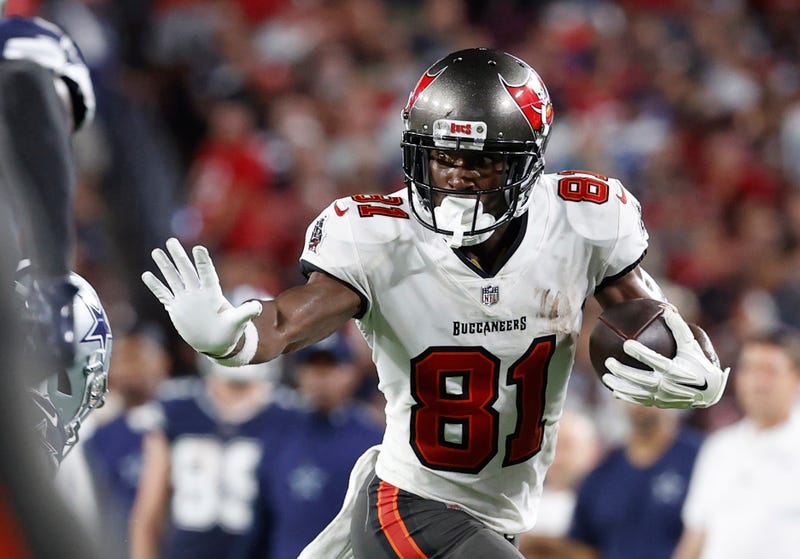 A recent report from the Tampa Bay Times alleges that Tampa Bay Buccaneers wide receiver Antonio Brown sought a fake COVID-19 vaccination card prior to training camp in an effort to avoid the NFL's safety protocols and guidelines.

The claim comes from Brown's former personal chef, Steven Ruiz, who told the Times that Brown had his girlfriend, model Cydney Moreau, ask Ruiz to seek out a fake Johnson & Johnson vaccination card for him. According to the report, Ruiz said he wasn't able to acquire a card for Brown, but added that the Pro Bowl wideout showed him cards purchased a few weeks later.

"This got so convoluted yesterday," Tiki Barber said during Friday's edition of the Tiki and Tierney show. "I can't malign AB, because I feel he's gotten his life right. But this is a serious thing, because not only did he allegedly do this, a lot of people are allegedly doing this across this country, to act like they got the vaccine. It's obviously something you've got to take seriously... It's just very convoluted. But I think it does present a troubling situation for the NFL."

Shortly after the Times story broke, Brown's attorney, Sean Burstyn, disputed the accusations and told ESPN that his client is vaccinated against COVID-19. Moreau also denied the claims, saying she didn't know Ruiz, and the NFL is now reviewing the entire matter. Brown happened to miss Week 3 due to a positive test, and since Week 7, he's been sidelined with an ankle injury.

The Buccaneers also responded to the story, saying in a statement that they had found "no irregularities" with Brown's vaccine card. During training camp, Buccaneers head coach Bruce Arians told reporters that the team -- players, coaches, and personnel -- was 100-percent vaccinated.

The entire Brown-COVID conversation between Tiki and Tierney can be accessed in the audio player above.