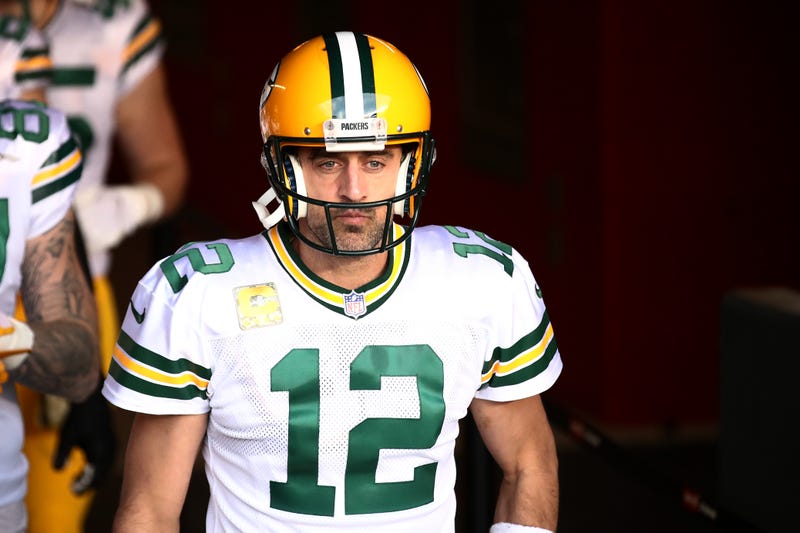 It appears that Aaron Rodgers' relationship with the Green Bay Packers is now in... well, jeopardy.

According to ESPN NFL insider Adam Schefter, the 37-year-old veteran quarterback and reigning league MVP is "so disgruntled" with the franchise, that he's told some people within the organization that he doesn't want to return to the team. NFL Network insider Ian Rapoport also shared some critical details on the situation, reporting that Rodgers' discontent has largely been due to stalled negotiations with Green Bay on a long-term contract extension.

Whether or not this is a negotiating ploy by Rodgers, Tiki and Tierney discussed the hot topic during Thursday's show, just a few hours ahead of the rumor-crazed NFL Draft.

"I think the Packers -- especially given his age -- they need to take this incredibly serious, to the point where this gets addressed tonight and they need to trade Aaron Rodgers today," Tierney said. "They've got to trade him. He's not happy. He wants out. You need to make the trade today... At least on three different occasions, they've had their team president, their GM, and the head coach fly out to try to resolve, patch-up, rectify, gloss-over whatever has gone awry with Aaron Rodgers. And to me, the timing is dubious.

"The thing about Rodgers that I've always suspected, is that he is passive-aggressive, but also, like, petty. And I believe that, by dropping this bomb today -- which, by the way, is no coincidence -- this blows up the Packers' draft day plans, puts them in a miserable spot, and Aaron Rodgers purposely complicated their day. That's what I believe just happened. You've got to trade the guy."

Tiki also shared his thoughts on the possibility of Rodgers being dealt sometime tonight or this weekend.

"Trading Aaron Rodgers puts $38.3 million of dead money on your cap. Right now, they can't save money if they do this," Tiki said. "There's just no way this is possible, unless there's a deal that happens after June 1, which you can always do. In principle, you draft whoever, we'll trade you Aaron Rodgers after June 1. But this is coming way too late, this report, and the timing of this is very interesting to me. Because we've kind of speculated that Aaron Rodgers has been upset for an entire year...

"At this point, 364 days ago, Aaron Rodgers was now replaced in the future thoughts of the franchise with [first-round quarterback] Jordan Love being drafted. And so Aaron Rodgers has been disgruntled for a long time... The timing is interesting. The question is, where did Schefty get this from? Was it someone inside the Green Bay Packers, or someone on Aaron Rodgers' side? I think it's probably the former... But the problem is, I think the number of teams that would take him is limited. Because, who is ready to win a Super Bowl right now and can take a 37-year-old quarterback?"

According to Spotrac.com, Rodgers has three years remaining on his contract with Green Bay, and his cap hit of $37.2 million this upcoming season will lead the NFL.

The entire Rodgers-Packers conversation between Tiki and Tierney can be accessed in the audio player above.