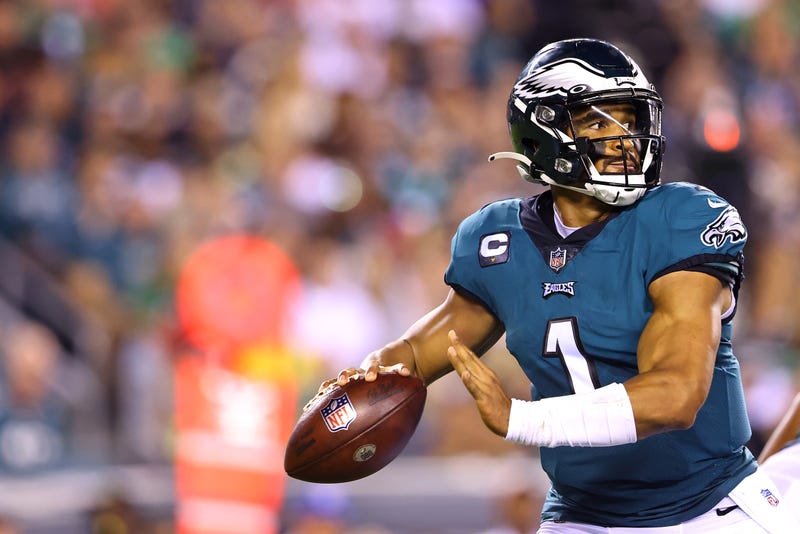 The defending champion Tampa Bay Buccaneers entered Thursday night's matchup against the Philadelphia Eagles with the NFL's worst pass defense, but it didn't look as though Jalen Hurts knew this ahead of time.

Facing an injury-depleted secondary, the Eagles' sophomore quarterback was sloppy, as he completed 12 of 26 passes for just 115 yards with a touchdown and an interception in the team's 28-22 home loss at Lincoln Financial Field. Although Hurts scored twice on the ground, the Eagles' offense didn't reach 100 total yards until the fourth quarter, and Hurts averaged just 4.4 yards per attempt while missing open receivers. In three words: stink, stank, stunk.

"He makes spectacular plays every game, and his running threat is significant and a big factor. However, he also misses some easy throws that you really need to make," former NFL player and current podcast host Ross Tucker told After Hours with Amy Lawrence on Friday. "He's consistently inconsistent. It's not necessarily always a bad thing. Other than the Cowboys game, he's given them a chance to win every game so far this season.

"But it's hard to gameplan around that as a head coach, when you've got a guy who's going to miss some easy throws like that... The reality is, they're going to need the whole season to really see if he can be their long-term answer. Because they have to see if he can get more consistent as the season unfolds."

Hurts wasn't solely responsible for Philadelphia's inactivity on offense. First-year head coach Nick Sirianni refused to run the football, as Miles Sanders received just one carry in the first half and nine total for the game (56 yards). According to ESPN, the Eagles entered Week 6 with Hurts accounting for a whopping 87-percent of their offense by yardage, the NFL's highest mark.

Through six games, Hurts has completed 62.5-percent of his passes for 1,480 yards with eight touchdowns and four interceptions, and also rushed for 300 yards on 53 attempts with five scores. Sirianni's offense needs a pick-me-up, since the unit ranks 22nd in average yards (346.0) and 17th in points (22.8).

Philadelphia (2-4) will visit the Las Vegas Raiders (3-2) in a Week 7 matchup on Sunday, Oct. 24. According to FiveThirtyEight's projections, the Eagles have a 17-percent chance to reach the playoffs and an 8-percent chance to win the NFC East.

The entire NFL conversation between Tucker and Lawrence can be accessed in the audio player above.