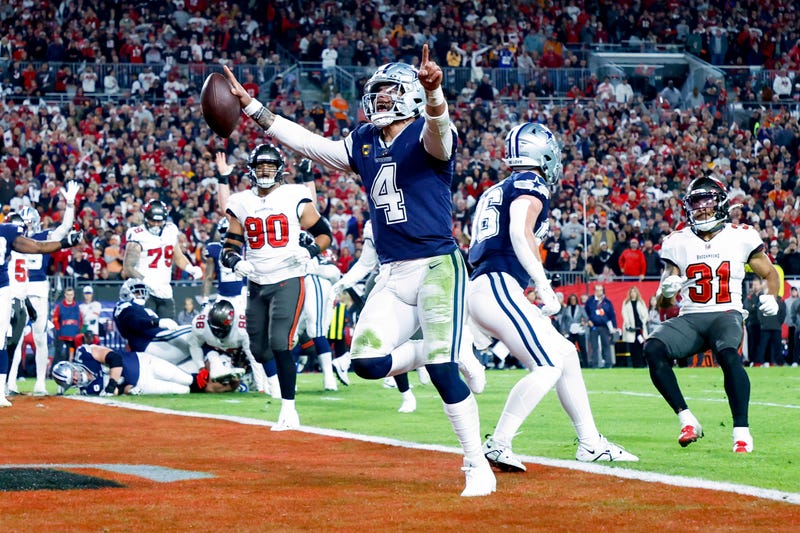 Tom Brady should never play another football game in his career. And frankly, teams in need of a starting quarterback next year should also not want Brady. Of course, we all know that neither of these things will go down the way they should. The Raiders, Dolphins, and even the Bucs will knock down the doors to get the deteriorated Brady. But they'll be left disappointed with everything, besides ticket sales.

We can discuss how bad Tampa's offensive line is, and how bad Todd Bowles is as a head coach. But there was a time when Brady overcame bad offensive line play, and now it's so obvious that he can only dial up the arm strength for the occasional big throw. Over the course of 60 minutes, Brady's throws look more like slurped spaghetti.

If a team signs Brady, they can't expect anything more than one year. And if it is for one year, they have to dream of the Super Bowl. Look back on this past Monday night -- did Brady look like a quarterback able to play 17 games in the regular season, and at least three more in the playoffs? Now, tack on another year of body age. Again, why would any team take Brady? Saying goodbye is tough, but it's time for him to move on and sit in the broadcast booth.

No. 1: Lamar Jackson's relationship with the Ravens feels unsalvageable. And following the team's playoff loss to the Bengals last Sunday, J.K. Dobbins was refreshingly honest about how he thought they would've fared if Jackson had played. There's no way there's trust in Baltimore's locker room with an injured QB who put himself before the team at the crowning moment of a season.

No. 2: So, what's next for the Vikings with Kirk Cousins? Kevon O'Connell did wonders, but, in the end, Cousins was still Cousins when he dumped off to TJ Hockenson and failed to convert on fourth down with their season on the line. Minnesota needs an elite defense, and they're multiple pieces away from that being the case. Without them, they'll stay in no man's land. And they'll remain a playoff team with no true threat of winning a ring and being at the top of the draft to truly change the franchise.

No. 3: It's possible that Sean Payton was the most confused man in America on Tuesday. He interviewed with the Texans, seemingly as the Cowboys were beating up the Bucs. I believe, in Payton's heart of hearts, he thought Dallas was going to lose, creating the opening of his dreams. Now, is Payton better off leading the broken Texans? What about waiting another year? The Rams, Chargers, and Cowboys could have openings next time around, too.

No. 4: Brandon Staley is the Chargers' head coach before making Super Bowl predictions in August. The team's wild-card implosion against the Jags wasn't entirely on him, but the fact they didn't have Mike Williams mattered. And, the fact Staley has Austin Ekeler and couldn't run the ball -- or limit Jacksonville's possessions -- mattered more. You can change cities, players, whatever you want. As long as Staley is the head coach, the Chargers will let down fans.

No. 5: Are we positive Geno Smith will remain the Seahawks' quarterback in 2023? Last week, he was fairly open about saying he wants to remain there, but he also needs to take care of his family's best interests, financially. Smith did enough this year to draw interest elsewhere. I'm not so sure it's a lock he returns. In fact, if the Seahawks were in a bigger market, I think this would be a bigger story and conversation. 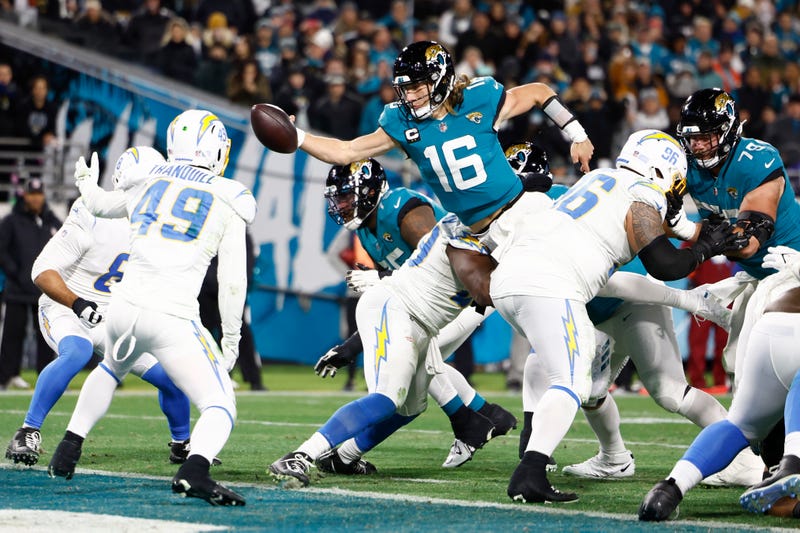 Four Games to Chew On

Jaguars at Chiefs: The Jags will play a third straight Saturday game. In fact, dating back through high school and college, Trevor Lawrence has never lost on a Saturday. Now, he steps up a weight class in Arrowhead Stadium against these Chiefs. Perhaps Doug Pederson and Andy Reid know each other better than any other playoff coaching matchup we see this winter. A win in this spot would change Lawrence's career forever.

Giants at Eagles: New York hasn't won in Philadelphia in a decade, and two weeks ago, they showed nothing there with backups in. Over the past month, the Eagles haven't looked like that formidable, early-season force. Jalen Hurts isn't on the injury report, but he also hasn't publicly declared that his banged-up throwing shoulder is normal again. Can Daniel Jones continue to dime his way to elite quarterback status in this hostile environment?

Cowboys at 49ers: A classic NFL rivalry gets reunited for a second straight postseason. Dak Prescott and Mike McCarthy have some serious demons to exorcise after inexplicable late-game mistakes against the Niners last season. Brock Purdy remains a mystery, but a mystery that keeps winning. Dallas will also be the best defense Purdy has faced, thus far.

Bengals at Bills: This'll be an emotional one for both teams, as the previous meeting was cut short by Damar Hamlin's on-field cardiac arrest. The Bengals are probably a bit annoyed that this game isn't at home, considering they had a lead and were driving against the Bills a couple weeks ago. The road doesn't faze them, however. Can Josh Allen stop the turnovers, win a clean game, and send Buffalo to the AFC Championship? 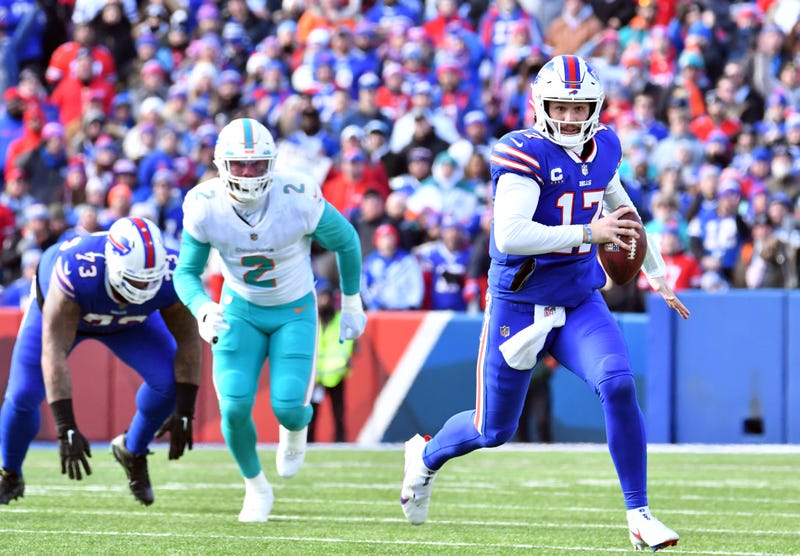 My Picks
﻿A 2-1 week to start the postseason has me feeling good and doing well. And it made me 30-27 overall this season. For this week:

Jaguars (+8.5) at Chiefs: Patrick Mahomes is just 11-18 ATS as a favorite of 7-plus points over the past three seasons. Since 2003, the favorites of 7-plus points in the divisional round are only 19-29-1 ATS. Simply put, the teams still playing are here for a reason, and being underdogs by as much as 8.5 points remains disrespectful. The one head coach remaining who knows all there is to know about Andy Reid's prep work and tendencies is his former offensive coordinator, Doug Pederson. Kansas City is too talented to lose this, but they always seem to play close games against some good teams. So I'll gladly take the points here with Jacksonville.

Bengals (+4.5) at Bills: The Bengals have offensive line injuries and issues, but the Bills' pass rush also hasn't been the same since Von Miller suffered a season-ending knee injury. Cincinnati had a lead and was driving on Buffalo's defense with ease before the Hamlin collapsed. On the flip side, I don't trust Josh Allen turning the ball over less than Joe Burrow. In fact, I think the better quarterback actually wears black and orange. This is a disrespectful spread in a game that should come down to the wire. Give me the points with Cincy.

Cowboys (+3.5) at 49ers: I've made this selection after deeply looking in the mirror and hating myself. And I've been a ring leader for mocking Dallas' playoff duds in my adult life -- in fact, nobody might get more enjoyment out of them than I do. While I hold out hope the 49ers drill a field goal that buries the Cowboys -- or, better yet, Brett Maher shanks one from a fan perspective -- I actually believe Dallas is going to win this game outright. Brock Purdy has played perfect balls for, what he's asked to do. But, at some point, he has to turn back into a pumpkin. Purdy has yet to face a defense this talented. And on the other side, I think Dak Prescott and the offense feels more confident.

Buffalo Chicken Bombs. You didn't think I was going to let these playoffs pass without a buffalo chicken-infused food, right? Thanks to Upside Down Mike for this submission. Do you like warm biscuits? Yes. Do you like buffalo chicken? Yes. Do you like a blend of cheeses? Yes. So stop rolling your eyes and enjoy what essentially becomes a biscuit-garlic knot stuffed with cheese, buffalo chicken, ranch, and blue cheese. Here's a great recipe: https://www.tastemade.com/recipes/buffalo-chicken-biscuit-bombs

We strive to be a platform where varying opinions may be voiced and heard. The views, thoughts, and opinions expressed by the author(s) of this article and/or by those providing comments are theirs alone, and do not represent those of Audacy, Inc. We are not responsible for any damages or losses arising from this article and/or any comment(s).
Featured Image Photo Credit: Mike Ehrmann / Staff / Getty Images