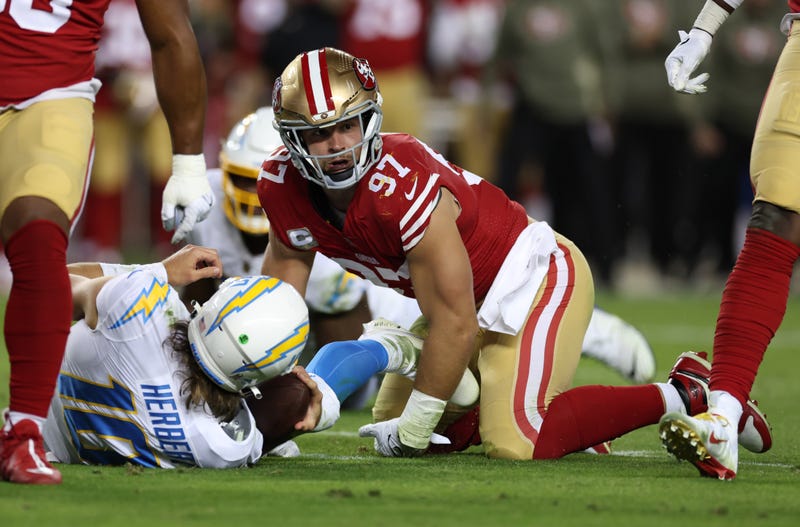 The Vikings' road trip to Buffalo told us a lot about both teams, as they played in the best regular season game we'll see all season. Those "Kirk Cousins not winning in primetime" jokes are funny and oftentimes relevant. But Vikes stars Justin Jefferson and Dalvin Cook are better than they've been previously. The offensive system is better. And the team just proved they can win outdoors in lousy conditions against a great Bills team and operate at a high level. They're a legitimate Super Bowl contender now -- even if we still make Cousins jokes.

As for the Bills, they continue to show that Josh Allen is seemingly regressing as a red zone quarterback and a protector of the football, despite his ability to toss 60-yard lasers and get his team back into striking distance. Turnovers are killer in playoff games, and trusting Allen not to turn it over feels like a big ask. The AFC East crown is now very much up for grabs.

No. 1: Derek Carr crying after the Raiders' loss to the Colts last week feels like a true rock-bottom from where the team was a year ago. They literally lost to a team that couldn't have possibly been fully and properly prepared with a head coach who was on ESPN just days earlier. The Raiders went through so much adversity a year ago and were able to overcome it all. Now, they're losing to a coach who didn't even believe he was ready to be hired.

No. 2: Mike McCarthy coached scared and covered it up as some analytical approach in Green Bay last week. The Packers had momentum with that wild fourth quarter. But in overtime, if you can't trust your kicker to make a 52-yard field goal outside -- and your defense to then keep Aaron Rodgers out of the end zone -- I don't want to hear about how the Cowboys are title contenders. Every team with a winning record has accomplished stopping Rodgers at the end of a game this year. Yet, the Cowboys were worried they couldn't.

No. 3: Last Thursday night, Arthur Smith coached like someone who has no interest in the Falcons making the playoffs. The weather in Carolina was bad, but not unplayable. Yet, Smith was playing for field goals and still has no clue how to properly gameplan Kyle Pitts into the passing game. So, just like that, it appears the Falcons' division title dreams might be dying with that loss and back-to-back Buccaneers wins.

No. 4: The crowd in Germany for Bucs-Seahawks was awesome on Sunday, but it doesn't mean we should keep playing as many games overseas as we do. The International Series is watered down. We need to stop taking games from home cities, fans, and vendors, and sending them over to Europe. One game each season? Fine. But five? What are we doing?

No. 5: The Saints are worse than being bad -- they've become a completely irrelevant franchise. The path for Jameis Winston to return as the starting QB should've happened two weeks ago. Now it's too little, too late. Andy Dalton stinks. Dennis Allen stinks. And New Orleans went from a fun 15-year story to unwatchable in just a matter of months. 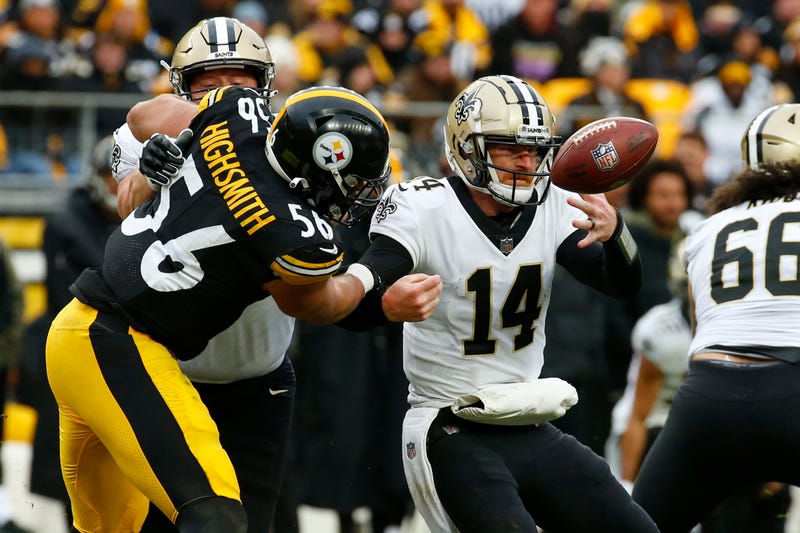 No. 6: Kadarius Toney is already becoming the receiver we thought he'd be, coming out of the 2021 draft. Only now it's with the Chiefs, which handed the Giants a decent draft-pick package to acquire him. He scored his first-career touchdown last week, and had another elite catch along the sidelines. Toney never stayed healthy during his year-and-a-half run in New York. Now, he just may end up being the Chiefs' perfect replacement for Tyreek Hill, long-term.

No. 7: Justin Fields' pick-six into the arms of Jeff Okudah last week was the decisive moment in the Bears' home loss to the Lions. After the game, Fields said that he's tired of moral victories and losing. That's what you want to hear from a franchise star. The only issue is, while he's becoming an elite running quarterback, his mistakes through the air keep costing Chicago games.

No. 8: Kenny Golladay has become the biggest embarrassment -- in terms of money on a contract compared to ability -- we've seen in NFL free agency in a long time. Last week, he came off a multiple-week absence after an ugly start to the season, and dropped two balls any semi-decent receiver should catch. He was benched in the second half of the Giants' home win over the Texans, and now we're left wondering if he sees the field again this year.

No. 9: I'm very much over the Chargers as an interesting franchise. The Phillip Rivers-led team and Justin Herbert-led unit feel the same. Brandon Staley isn't a very good head coach. As a result, you get 16-point efforts with second-half duds. Should Herbert be shut out in the second half of games at this stage of his career? He shouldn't -- unless he isn't as elite as people rushed to declare he was. The Chargers are broken, despite their playoff chances remaining.

No. 10: Will Sean McVay stick around in 2023? The reigning champion Rams are a three-win disaster, with no first-round picks and a lack of assets in their immediate future. McVay got a ring and he can be hired elsewhere after some time off. This Rams roster is going to be a mess to retool, and McVay may not have the patience for a project like that. 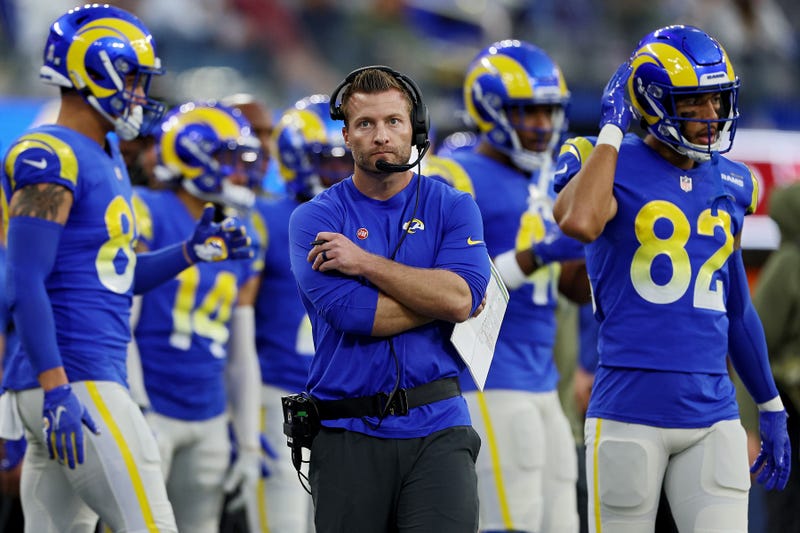 ﻿Lions at Giants: FOX has a bit of a weak Sunday slate. Thus, their A-team is heading to MetLife Stadium to see the fighting Dan Campbells. Detroit's year has been sort of, dare I say, revived? If they were to win and get to 4-6 over a good Giants team, the last NFC wild card spot is suddenly in striking distance. As for New York, a win and an 8-2 start to the season will put the champagne on ice for an unexpected playoff berth.

49ers at Cardinals: Kyler Murray's injury led to a Colt McCoy road win over the Rams last Sunday. Maybe that's unfair to Murray, and there should be no controversy. However, it's now "last stand" time for the birds. And a home win over the 49ers, which hold the final NFC playoff spot, would give Arizona life.

Jets at Patriots: The Jets have lost 13 straight games to the Patriots. They were a bad late-hit penalty away from leading 17-3 against them a few weeks ago. Instead, the game went the other way. Now, the Jets face their biggest game in Foxboro since the classic "Can't Wait" playoff game from 2010. They could end Sunday anywhere in the AFC East race, from first place to last.

Chiefs at Chargers: Kansas City and Los Angeles will get to play a second primetime game this season. Earlier in the column, I mentioned how I believe the Chargers are overrated and underwhelming. But, the one squad they play interesting games against is actually the Chiefs. So if the Chargers want us to believe in them, truly, they find a way to win at home on Sunday night.

Cowboys at Vikings: Minnesota and Dallas enter the late Sunday window feeling completely different about themselves. The Vikings have to be riding high after the win in Buffalo, but will this be the classic letdown at home after an emotional game? That's a big test for rookie head coach Kevin O'Connell. In recent memory, the Cowboys have let rough losses turn into rough losing streaks. And they could be in danger of one of those here. 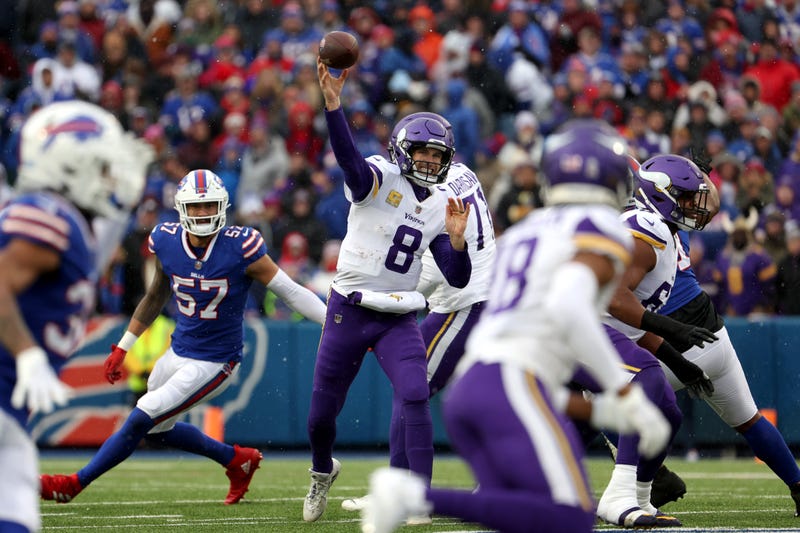 Panthers (+13) at Ravens: Carolina stinks, they're 0-4 on the road, and it really should feel like they have no chance to win this game. But, 13 points is a very big spread to lay for a team like the Ravens, which do like to play close games with run-heavy time of possessions. The Panthers dominated the line of scrimmage against the Falcons last week, and have a chance to win some wars in the trenches. This is a classic, too-many-points play by me. Give me Baltimore to win, but Carolina to cover.

Bengals (-3.5) at Steelers: Week 1 of the season feels like three years ago, when the Bengals turned the ball over five times and the Steelers still needed overtime to win in Cincy. Ja'Marr Chase will still to be missed, but his absence means more heavy doses of Joe Mixon, who scored a whopping five times a few weeks ago. The Steelers will have TJ Watt but no Minkah Fitzpatrick, and this is a huge deal, in terms of thinking Cincy may turn the ball over a bunch. The Bengals will win this game by at least a touchdown.

Rams (+3.5) at Saints: The Saints keep ramming their heads into the wall -- no pun intended -- by starting Dalton, and it almost feels like they're tanking. Yet, here they're favored (yes, favored) against the freefalling Rams. Matthew Stafford is expected to return, but the only weapon he trusts is Cooper Kupp, who's out indefinitely. It's now or never to trust Allen Robinson and the Rams' run game. This won't be pretty, by any means. But McVay, on this Super Bowl defense year, can't lose by more than a field goal to Andy Freaking Dalton.

Sausage-Peppers Meatball Sandwiches. Do you love a meatball sub? Do you love sausage and peppers? Do you love life? Ok, good. Here you go. Depending on how many people you're serving, this is easy. One pound of ground sausage, 1/4 cup of diced white onion, 1 1/2 cups of some chopped red and yellow peppers, one egg, one cup of wet bread crumb, garlic powder, salt, and pepper. Mold it all together and roll the mixture into balls. Bake them for 25-30 minutes at 350 degrees.

The next step is the dealer's choice. Do you like your sausage and peppers in a red sauce? If so, make some and let the meatballs sit in the sauce. Do you prefer your meatballs a little dry? That's OK too. Serve on fresh garlic bread for the full experience. Original enough? I hope so. If not, too bad. I'll enjoy.

We strive to be a platform where varying opinions may be voiced and heard. The views, thoughts, and opinions expressed by the author(s) of this article and/or by those providing comments are theirs alone, and do not represent those of Audacy, Inc. We are not responsible for any damages or losses arising from this article and/or any comment(s).
Featured Image Photo Credit: Ezra Shaw / Staff / Getty Images