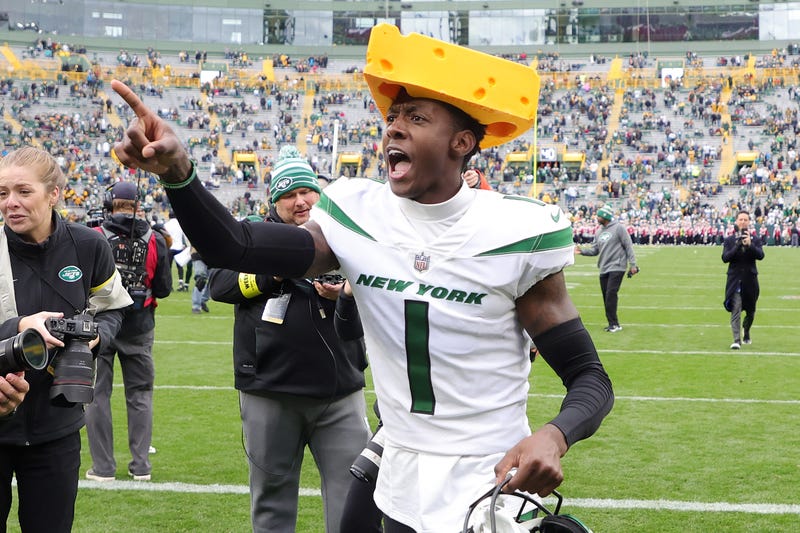 Josh Allen, Sean McDermott, and the Bills slayed a huge dragon by going on the road and defeating the Chiefs at Arrowhead Stadium. But doing this twice in one season is a different animal. Now, I'm not trying to throw cold water on the Bills' happiness or Bills Mafia's celebrated chest-thumping, table jumping, exorbitance. The Chiefs-Bills rivalry is already amazing, and Peter King told DA on our show this week that Allen facing Patrick Mahomes may be better than Peyton Manning opposing Tom Brady.

This won't be a hammer-and-nail rivalry, where one team will pound the other for years. A regular season win for Buffalo was mentally relieving and mentally rewarding, but it'll mean nothing if they can't slay the Chiefs dragon one more time, and on the postseason stage. The Bills have now positioned themselves to play that potential playoff game at home, but the Chiefs roster might look a whole lot different -- or, should I say an Odell lot different -- in a rematch.

No. 1: The Ravens have blown three double-digit leads and lost this season. John Harbaugh has long been considered one of the league's best coaches, but this is bordering on incompetency. The sign of a coach in control of their locker room is finishing games with a win. And right now, Baltimore is one of the worst teams in the NFL, in that category.

No. 2: The Giants have beaten the No. 1 seeds from last year's playoffs, and combined to beat the last three league MVP recipients. And at some point, a fun, fluky season becomes reality. So, the Giants are actually a good football team, thanks to first-year head coach Brian Daboll.

No. 3: Are the Packers even good? Seriously. Think about their roster. How good are they? They're 3-3, thanks to Aaron Rodgers and a formidable pass rush. But their special teams unit still stinks, and their wide receiver room is one of the worst in the NFL. It's getting late early for Green Bay, in a division where the Vikings already have five wins.

No. 4: Boston Globe writer Ben Volin reported this week that Mac Jones' head has been inflated a bit, due to his Pro Bowl appearance last season. This, while Bailey Zappe continues to win games for the Patriots. 2022 felt like a sinking disaster for New England before Jones injured his ankle. And there'll be a lot of pressure on Jones, once he returns, to beat some teams that seem destined for the playoffs.

No. 5: Could the NFL have somehow lucked-out for Thanksgiving football? Yes, the Lions stink. But they're a fun stink -- and they'll be hosting the Bills. That's a team everyone wants to watch. The Giants should've been a disaster, but now at a stunning 5-1, their Thanksgiving game against the rival Cowboys is guaranteed to be important. The Vikings will host the Pats on Thanksgiving night. Minnesota could be in play for the NFC's No. 1 seed, and New England may actually be in playoff contention. Three duds now look pretty decent. 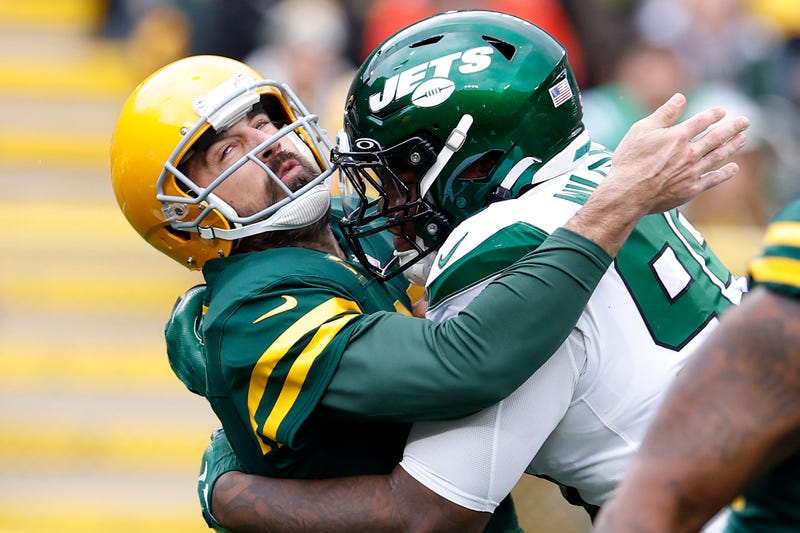 No. 6: It turns out that Dak Prescott is a normal healer, as he hurt his thumb six weeks ago. Big surprise. But he appears ready to return as the Cowboys' starter this weekend, making the end to the Cooper Rush experience. Dallas owner Jerry Jones never saw the Rush winning streak coming, which is why he panicked and initially told his fans that Prescott was a fast healer.

No. 7: The Cardinals acquired Robbie Anderson and have DeAndre Hopkins back from suspension. Arizona looked lifeless against the rival Seahawks in Week 6, but no squad has run away in the NFC West. The Cardinals' pair of deep-ball weapons has the potential to save the campaign for Kyler Murray. That's until the new "Call of Duty" game comes out, of course.

No. 8: Is Tom Brady a distraction to his team? He's been a big story all year, but I can't help but imagine what we'd be saying about him if the Bucs were playing in a competent division. If they were in the NFC East or AFC West -- hell, even the NFC West -- Brady would have Tampa Bay dead and buried.

No. 9: Can Robert Saleh get some love? He challenged the New York media and fans that he'd keep receipts on those who wrote off the Jets after a poor start. Now they're 4-2, as they outclassed the Packers in Green Bay. And they did this at Lambeau Field without throwing the ball much at all -- proving they have a better roster than the Packers.

No. 10: It felt, karmically, that Jimmy Garoppolo would once again take over the 49ers and set them into cruise control through their division as the Rams sputtered. But things have hit a screeching halt, as San Francisco got blown out by the Falcons in Week 6. Like most of the NFL, the 49ers are a middle-of-the-road team, and far from elite. 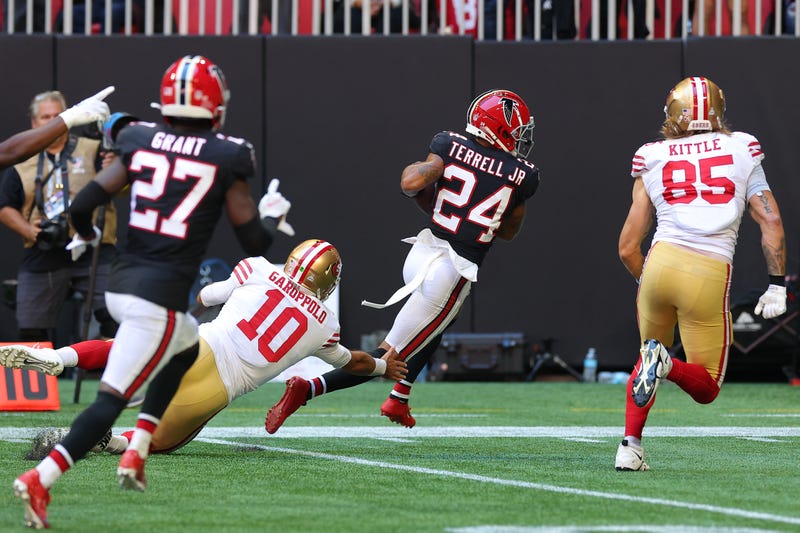 Falcons at Bengals: I'm in stunned disbelief that the Falcons have touched one of the fives best games of every week. Although this is partially due to a soft schedule this week, their play deserves recognition. They're 3-3 and at a turning point in the season. A road win over Cincinnati would give them back-to-back victories over playoff teams from a season ago and send them to 4-3, heading into Halloween weekend. And on the flip side, are the Bengals ready to take off and take back the North?

Jets at Broncos: This could be Russell Wilson's last stand this season. He's already dealing with a shoulder injury, and the Broncos quarterback could see a season that some had pegged for magic, fall to 2-5 with a home loss. There were Jets naysayers in the preseason who thought, based on their schedule, they'd start a pitiful 1-7. But a win in Denver would send them to 5-2, and dare I say, begin to put pressure on the Bills in the division.

Colts at Titans: It makes my fingers cringe to have these Colts in a top-tier game by my standards. The truth is, though, that this bout has huge division title implications. It'll officially be the Titans' division to fold up and hand over at some point on their own, if they win this game. Meanwhile, an Indianapolis win, and this very uninspiring start to the season will have them with the foot on the gas, sort of, to win the AFC South.

Chiefs at 49ers:  Before the pandemic shut down this country in 2020, the Chiefs and 49ers met in Super Bowl 54, down in South Beach. Had the 49ers trusted Jimmy Garoppolo a little more, they might've won that game. Now the sputtering 49ers get a ticked-off Chiefs team, coming off a home loss against the Bills. The loser here will feel the heat of a brutal October losing skid. 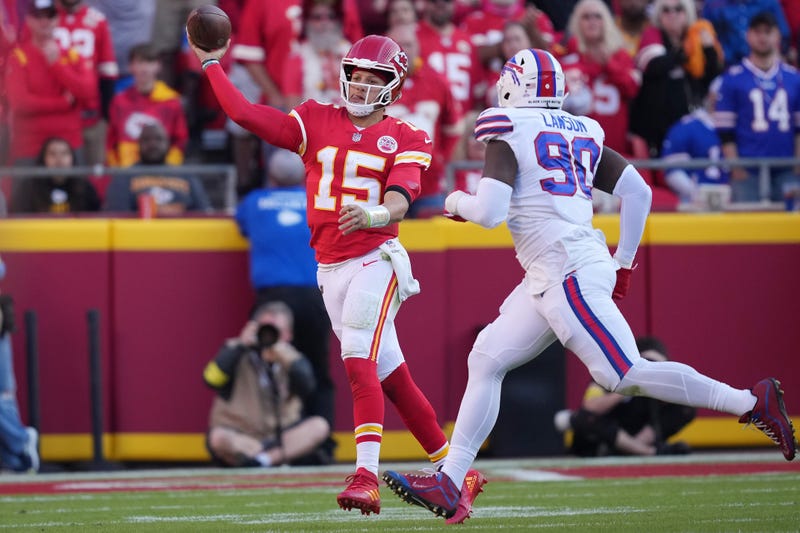 Giants (+3) at Jaguars: Am I doing it? Yes, I'm doing it. I'm betting on my favorite team, the Giants. This is a line that seems to not make much sense, but it's already moved from +2 to +3, which means that money is coming in on Jacksonville. The belief for betters would be that a letdown has to come for the Giants, and they may not be that talented. Regardless, these Giants don't beat themselves. And, as a result, they most likely won't be blown out all year. They're the better team. I'm getting the points. I'll gladly take them.

Packers (-4.5) at Commanders: Ugly back-to-back losses for Green Bay feels like reality on who they might be this year. But they're not not going to feast on bad opponents again. The Commanders aren't the Giants -- they're also not the Jets, which feels odd to say. Washington's one of the five-worst teams in the league. No Carson Wentz may prove to be a good thing for them, but, ultimately, Aaron Rodgers has to put these Packers on his back at some point and win a game by a touchdown. This would be a huge get-right game.

Jets (+1) at Broncos: Sometimes in gambling, you need to be a week early on a team before the market corrects itself. The Jets threw for less than a 100 yards against the Packers last week, and had big special teams plays lead to a win. The Broncos have offensive line problems, the Jets are formulating a big-time defense, and it feels like Wilson is teetering on missing a couple weeks if they lose this game. So I believe these feel-good Jets win this game outright, and Zach Wilson makes plays in the process.

Fried Spaghetti and Meatballs. I'm going to level with you guys: I've been sick this week. And when I'm sick, I do the opposite of what most people do. Most people don't feel hungry. I plow bad foods because I'm a pig. Make your favorite meatball recipe, make your favorite spaghetti. Let it cook in the fridge for two hours. Once cooled, chop the spaghetti and meatballs just a touch, not too fine. Then roll the pasta and meatballs in some Italian breadcrumbs in whatever shape you want. Then fry those in a pan, deep fryer, or air fryer until crispy golden brown. The spaghetti and meatballs now become a handheld burying food. I had this at a fair this fall and fell in love. You will too.

We strive to be a platform where varying opinions may be voiced and heard. The views, thoughts, and opinions expressed by the author(s) of this article and/or by those providing comments are theirs alone, and do not represent those of Audacy, Inc. We are not responsible for any damages or losses arising from this article and/or any comment(s).
Featured Image Photo Credit: Stacy Revere / Staff / Getty Images