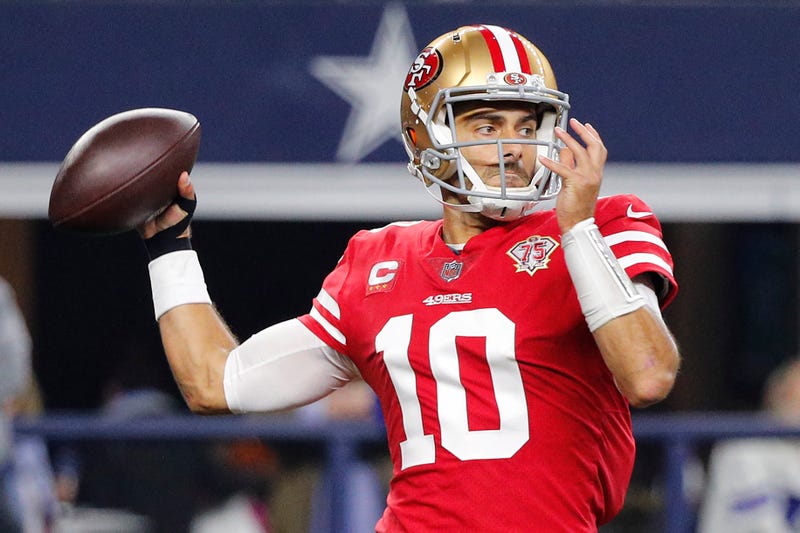 When the San Francisco 49ers start mandatory training camp later this month, the rumors involving quarterback Jimmy Garoppolo's future with the franchise should ramp up once again. The 30-year-old veteran, whose contract with the 49ers expires following the 2022 campaign, is reportedly "progressing well" in rehab from offseason shoulder surgery. And according to NFL Network insider Tom Pelissero, the consensus within the league is that Garoppolo will be dealt soon, as San Francisco is poised to move forward with youngster Trey Lance.

One of the 49ers' rivals has discussed the possibility of trading for Garoppolo. According to a report from ESPN's Jeremy Fowler, the Seattle Seahawks have "done their film work" on the signal-caller, although it's unclear whether either team would be fully comfortable with an intradivision trade. In five seasons as San Francisco's starter, Garoppolo's compiled a 31–14 record, along with 11,162 passing yards, 66 touchdowns, 38 interceptions, and a 98.3 passer rating. He also helped the 49ers reach the NFC title game, back in January.

"I don't have a thought [on where Garoppolo lands]. The biggest thing is, he's got to get healthy with his shoulder," NFL on CBS lead analyst Tony Romo told The Zach Gelb Show on Tuesday. "But, when he gets healthy, you'll see teams coming in. Right now, I think the Niners are staying pat. Because as soon as a quarterback gets injured in camp or in preseason, something usually happens where someone gets banged up, a bit. You'll see that'll be when the value will go up, and the 49ers will get more value than they're getting right now.

"I think that's when they're going to pull the trigger. But there's no exact spot right now, that I see... I can see [a Seattle trade]. But it's usually rare because you'd have to be getting a lot more for that. You know this person knows your team, inside and out, and don't necessarily want someone else in the division to have that kind of information or talent... If they view him as a really talented guy but think Trey's a bit more talented, they probably won't do that and trade him within the division. But if they view him not at that level, it'd be different."

The entire football conversation between Gelb and Romo can be accessed in the audio player above (conversation begins at 8:00 p.m. ET mark).