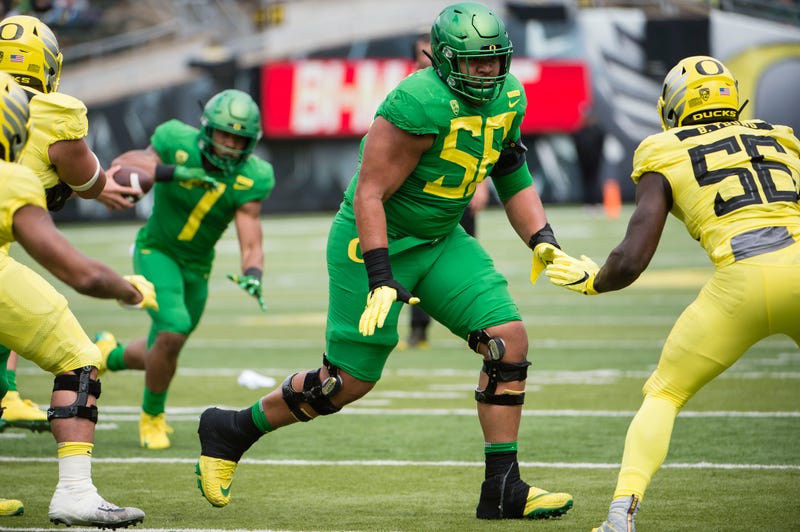 If the Cincinnati Bengals want to reach new heights and win a playoff game sometime this century, it'd behoove them to beef up their broken offensive line during this week's NFL Draft, and significantly reduce the risk of franchise quarterback Joe Burrow taking future beatings.

After all, with the No. 5 pick, Cincinnati is in a prime position to draft the top-ranked tackle in Oregon's Penei Sewell, according to Pro Football Focus analyst Solomon Wilcots.

"I'm on Team Penei Sewell," Wilcots told The Zach Gelb Show on Tuesday. "There are a lot of people, now -- including people in the building -- who are on Team [LSU wide receiver] Ja'Marr Chase. And I don't care what Joe Burrow tells you. You already know which way he's leaning. He threw 20 touchdown passes to Ja'Marr Chase alone during the 2019 season. Ja'Marr Chase knows the offense... He knows the quarterback, that's for sure. But the teams that invest top picks in the offensive line, they win.

"The 49ers, when they were on their roll under Jim Harbaugh, they had three first-round picks on the offensive line. They won a lot of games on that run. The Cowboys, while they've had the three first-round picks on their offensive line, they've won a lot of games. And the Indianapolis Colts recently had to invest in an offensive line that saw Andrew Luck retire early because he took a beating. But since making those investments, that team has gone to the postseason two out of the last three years...

"Teams that invest in the offensive line, they win games. I think even the Kansas City Chiefs found out. No matter who you have at quarterback, no matter what sexy toys you have at the skill positions, if you can't block for your quarterback and receivers, you can't win."

Sewell, who opted out of the 2020 Pac 12 season due to the pandemic, is the fourth-overall prospect on Pro Football Focus' NFL Draft Big Board, and widely considered a generational tackle.

In 2019, the 6-foot-5, 331-pound junior started 13 of 14 games for the Ducks, didn't allow a single sack, and was awarded the Outland Trophy (the nation's top interior lineman). Sewell also has exceptional athleticism for his stature, and according to PFF, he earned a 95.7 grade as a run-blocker two seasons ago and allowed just seven pressures on 491 total snaps.

Cincinnati would undoubtedly benefit from having Sewell protect Burrow's blindside. In 10 games as a rookie last season, Burrow attempted 404 passes and was sacked 32 times, and prior to suffering a season-ending knee injury in Week 11 against the Washington Football Team, he had been hit 72 times through nine games. Since 2000, only New York Giants quarterback Daniel Jones has been hit more as a rookie in the first nine games.

The first round of the NFL Draft will begin on Thursday, April 29 at 8 p.m. ET in Cleveland.

The entire NFL Draft conversation between Wilcots and Gelb can be accessed in the audio player above.