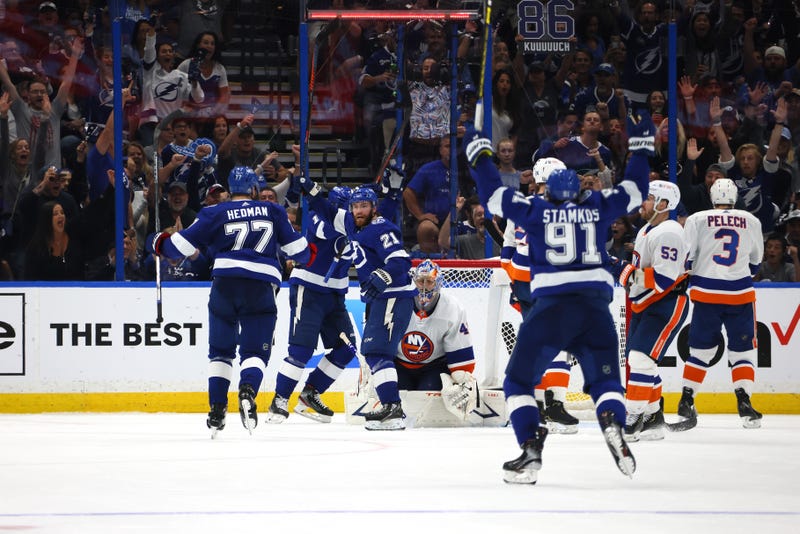 Tampa Bay Lightning coach Jon Cooper admitted to reporters on Sunday that his players weren't mentally prepared for Game 1 of their Stanley Cup semifinal series against the New York Islanders. But they certainly were for Game 2.

The defending champions avoided laying two eggs on home ice, as three assists from star right winger Nikita Kucherov helped the Lightning beat the Islanders, 4-2, on Tuesday night at Amalie Arena and even the series at 1-1.

Former NHL player and current Lightning television analyst Brian Engblom joined After Hours with Amy Lawrence on Wednesday to discuss Tampa Bay's win, and how much big-game experience matters at this stage in the playoffs.

"Experience matters, for sure," Engblom said. "We go through this every time there's a Game 7, right, and everybody starts talking Game 7. So, we're not at that point in this series. But sure, you'd rather be there before. But what if all your experiences are bad -- is that a good thing? I don't think so. You learn from losing, for sure. But you really reinforce everything and learn a ton by winning. By winning it all, by winning series, by closing series out, and going all the way and winning the Cup.

"So, do the Lightning have an advantage with the majority of their guys back from last year and having won the Cup? Absolutely, because you know what it feels like. The thing they have to be careful of is to not try to create what they did last year -- that's a mistake. Everything changes... So, to me, it's about the Lightning going, 'We have to match what [the Islanders] want because their desperation is to do what we did last year.' And the Lightning have to keep their heads down and play hard like they did tonight, and a lot less the way they did in Game 1."

With the win, Tampa Bay improved to 11-0 following a playoff loss over the last two postseasons, and according to Stats by STATS, Kucherov is the second skater all-time to record 20-plus points in the playoffs after missing the entire regular season.

Game 3 of their best-of-seven series will take place on Thursday night at Nassau Coliseum in New York, with faceoff scheduled for 8 p.m. ET.

The entire conversation between Engblom and Lawrence can be accessed in the audio player above.