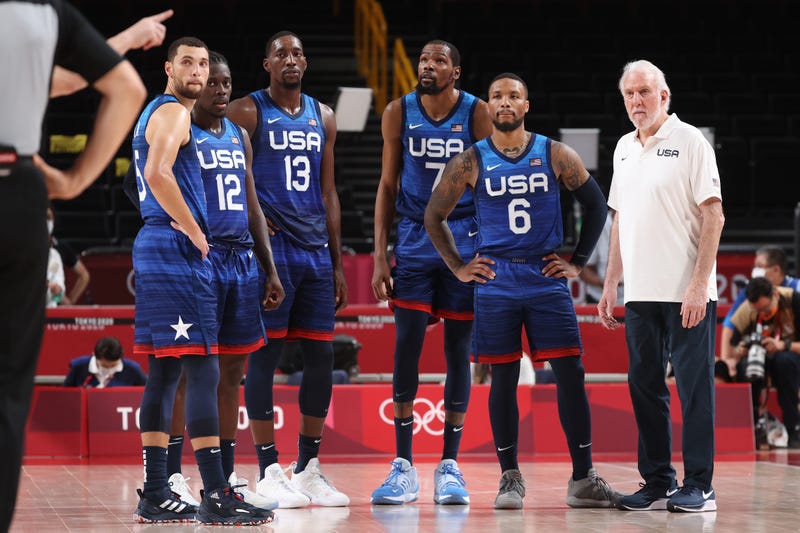 On Sunday in Tokyo, the U.S. men's basketball team lost its preliminary round opener to France, 83-76, snapping a 25-game Olympic winning streak dating back to 2004. A stunning defeat? Not exactly. When you don't have the right pieces in place, you end up falling short of your ultimate goal. So far, that's the takeaway from these Summer Olympic Games -- you reap what you sow.

Today's top American players are apathetic toward the Olympics. Back in 1992, they cared a whole lot more about chasing gold. The "Dream Team" had a combined 15 regular season MVP awards on their roster -- the 2021 team has only one. All 11 players on the '92 roster made an All-NBA First Team in their careers, and all became eventual Hall of Famers. Of the 12 NBA players on this year's roster, just two have earned All-NBA First Team honors: Kevin Durant and Damian Lillard.

This summer, there were eight 2020-21 All-NBA players healthy enough to join Team USA. Do you know how many of those Americans accepted the challenge? Just one.

There've been many rumblings about Team USA head coach Gregg Popovich, and the implementation of his San Antonio Spurs system in the Tokyo games. No one can dispute his success in the NBA, but as the years have gone by, it's become more and more apparent how much Popovich benefited from having Hall of Fame big man Tim Duncan. Without Duncan, Popovich looks like a very average NBA coach.

These two players were selected to be part of an exclusive group in Tokyo. Granted, they were replacements, but there's at least 50 other players out there who could give the U.S. a better chance of competing. McGee and Johnson aren't Olympic-caliber players, and they don't belong on the world stage.

John Wooden is one of the greatest basketball coaches in history. He once said -- quoting Benjamin Franklin -- that, "By failing to prepare, you are preparing to fail." The efforts in assembling Team USA have fallen significantly short. Drastic changes need to be made on the court. ​

David Shepard is a former ESPN researcher, a former Division I college basketball practice player, and the host of The Good Shepard YouTube channel. Follow him on Twitter @TheGoodShepard_.