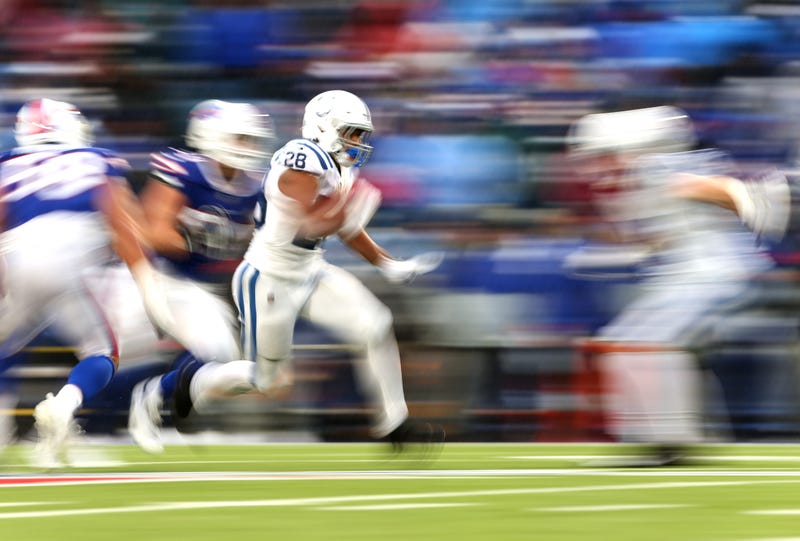 In this edition of Top-10 Stats of the Week, another strong showing from Tom Brady and the Tampa Bay Buccaneers -- can't say the same about the New York Giants. Indianapolis Colts halfback Jonathan Taylor is putting the league on notice, and Ben Roethlisberger doesn't look completely cooked. Is it time to remove the "washed" label he received at the beginning of this season?

5 -- Jonathan Taylor made Colts history on Sunday against the Buffalo Bills, becoming the franchise's first player to score five total touchdowns in a single game. This is an organization that's been around since the early 1950s.

9 -- The Dallas Cowboys scored a season-low nine points in a road loss to the Kansas City Chiefs in Week 11. They scored 32 points on average in their first nine games of the season.

60/8.0 -- On the bright side, Cowboys rookie linebacker Micah Parsons is the first NFL player with 60 tackles and 8.0 sacks in his team's first 10 games of a season since Terrell Suggs in 2013. Parsons is just 22 years old.

6 -- The Cincinnati Bengals crushed the Las Vegas Raiders on the road in Week 11, improving to 6-4 overall and matching their win total over the past two seasons combined.

68-3 -- The Atlanta Falcons have been outscored 68-3 in their past two games. The team averaged 22 points in their first eight games of the season.

5 -- The New England Patriots have won five games on the road this season. This is the same amount of road wins the other three AFC East teams have combined.

8 -- The lowly Detroit Lions have won eight total games over their past three seasons, while the Arizona Cardinals already have nine wins in 2021.

27 -- In a thrilling loss to the Los Angeles Chargers on Sunday, the Steelers managed to score 27 points in the fourth quarter. They posted just 16 points in an ugly Week 10 tie against the Lions. Ben Roethlisberger's absence two weeks ago significantly impacted Pittsburgh's flow on offense.

300+ -- Tom Brady threw for 307 yards in the Bucs' win over the Giants on Monday night. It was his fifth 300-plus yard passing game of this season. In 2021, nobody has more of those than Brady -- his five matches the 300-plus games between Patrick Mahomes and Mac Jones. Brady is 44 years young.

37 -- Giants running back Saquon Barkley rushed for only 26 yards against the Bucs. He's currently averaging 37 yards on the ground. He recorded 82 yards per game in his rookie season, four years ago. There has been regression, to say the least, and it's not what New York wants to see from a 24-year-old.