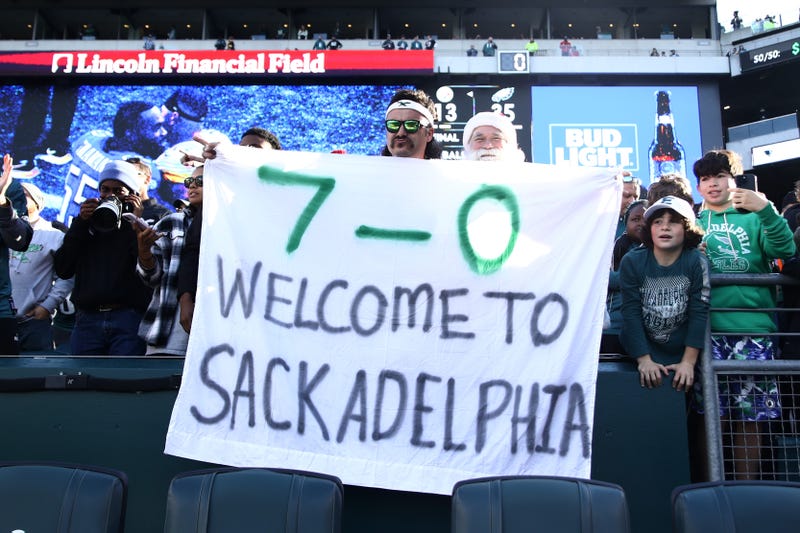 This year, Christmas came early for Philadelphia, with the Phillies reaching the World Series and the Eagles getting off to a perfect 7-0 start. And the rarity of simultaneous championship runs in one city has placed an exuberant amount of pressure on the undefeated Eagles to match the Phillies' playoff success.

After winning just 87 games during the regular season, the Phillies have been baseball's lovable darlings in 2022. They reached the postseason by a single game, largely by virtue of seemingly facing the game's bottom-feeders every other week. But, just like those who play with house money at the casino are more likely to win, the Phillies have played with a calm, cool confidence that's allowed them to reach the Fall Classic. And even if they wind up losing to the reigning AL champion Houston Astros, this year will be considered a massive success, considering how things looked early on.

In contrast to their hardball counterparts, expectations were already high for Nick Sirianni's team on the gridiron. The Eagles' overachievement last season -- they finished 9-8 with a wild-card round loss -- prompted general manager Howie Roseman to trade for superstar receiver A.J. Brown and sign veteran cornerback James Bradberry.

Determined to take advantage of a lower salary cap, due to star quarterback Jalen Hurts' rookie contract, the Eagles' championship potential this season was never in doubt. However, the combination of a down year for the rest of the conference, an easier schedule, explosiveness on offense, and massive leaps forward from Hurts have expedited their growth. As the only remaining undefeated team, gaining the coveted top NFC playoff spot seems to be the bare minimum.

Their improbable underdog run to beating the almighty New England Patriots in Super Bowl 52 was fun. But the fallout in subsequent years, which featured Carson Wentz losing the starting quarterback job and Doug Pederson getting fired, left a sour taste in Philadelphia fans' mouths. The disappointment led to a partial organizational retooling, which has made the 2022 squad look better -- both in terms of production, and from a stamina perspective.

It's no accident that the Eagles are off to their best start since 2004 -- a year they also reached the Super Bowl. Right now, they're the team to beat in the NFC, and an undefeated campaign is possible. As much as the Phillies' latest run of success has felt like an anomaly -- they just snapped a 10-year playoff drought -- the Eagles' dominance was predictable. They've made consistent winning the norm.

Nearly everything has to go right for a team to win a championship. Which is why, oftentimes, the hottest, hungriest squad out-battles the most talented one. The difficulty in winning one trophy speaks to the infrequency in taking home a trophy in two sports, occurring as commonly as a blue moon.

Boston was the last city to win a World Series and Super Bowl in the same season, as the 2004 Red Sox broke the "Curse of The Bambino" before the Patriots won months later. Before then, the New York Mets and Giants were crowned champions in 1986. There was an 18-year gap, and it's also been 18 years since 2004. So, fate could repeat itself with a pair of Philadelphia titles.

With Philadelphia being a football-centric city, the Phillies' recent stretch has to leave fans wanting more from the Eagles. Perhaps the surprising nature of their Phillies outlasting the St. Louis Cardinals, Atlanta Braves, and San Diego Padres in consecutive playoff series doesn't directly impact fans' craving for football galore. But, witnessing Tom Brady and Aaron Rodgers show signs of regression -- coupled with the Los Angeles Rams' title hangover -- needs to give Eagles fans a sense of confidence. The NFC is there for the taking.

It remains to be seen whether the Phillies can outlast a high-powered Astros team, but there seems to be belief that these Eagles can take down any unit in the NFL. They're certainly the golden child of the Philadelphia sports family, as the spotlight shines brightest on Lincoln Financial Field. Seeing the Phillies embrace the underdog mindset -- mere miles from where Rocky Balboa went on his inspiring montage training run -- must make the Eagles more motivated to finish their season in a similar fashion.

We strive to be a platform where varying opinions may be voiced and heard. The views, thoughts, and opinions expressed by the author(s) of this article and/or by those providing comments are theirs alone, and do not represent those of Audacy, Inc. We are not responsible for any damages or losses arising from this article and/or any comment(s).
Featured Image Photo Credit: Tim Nwachukwu / Staff / Getty Images