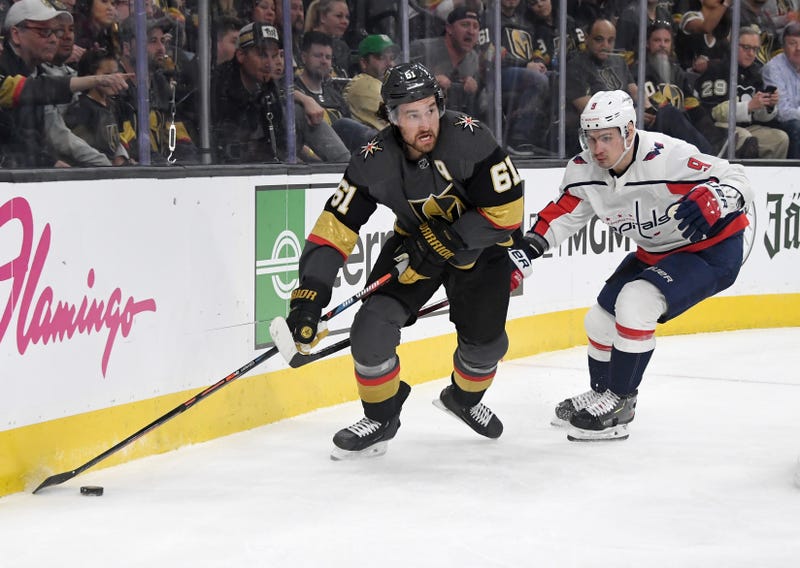 Wrestling with your own mortality is never a fun concept or practice. But sometimes it can be therapeutic to project your eventual inevitable failure in effort to take away its power over you. To make the problem smaller in your mind before your busy little brain inflates it to a size big enough to cast a shadow over your belief in the process, in the grind, in what you’re capable of. On Wednesday night with a 5-2 victory over the San Jose Sharks, the Vegas Golden Knights became the first team to clinch a playoff berth for the 2020-2021 season (or just 2021 because you know the ‘Rona). We are officially in the home stretch, pressure for seeding is definitely there especially in a contentious West Division but a big time check mark was taken care of. You made it to the dance. You look the part, you feel the part, but sometimes that one kid who used to tease you when you were little thought tonight of all nights was a great time to speak to you for the first time since middle school just to tell you that your outfit choice is “interesting”

So in effort to take away the power of inevitable failure, we are here to cathartically excise a few sources of potential doom and gloom for the Vegas Golden Knights in the playoffs. Because I’ve played a lot of hockey and watched even more of it, let’s just say I have a few inclinations in what it would take to derail the Vegas Golden Knights in their quest to hoist Lord Stanley’s Cup. Mental health is a major focus in my life and to help me put a label on this lovely exercise we’re about to embark on I had to enlist the help and professional expertise of one of my closest friends and former teammate Marianne. She spends her day helping people navigate their brains and feelings as a medical social worker in Alaska. I texted her way too late on Wednesday night in hopes that she could give me a term or concept to define the following: 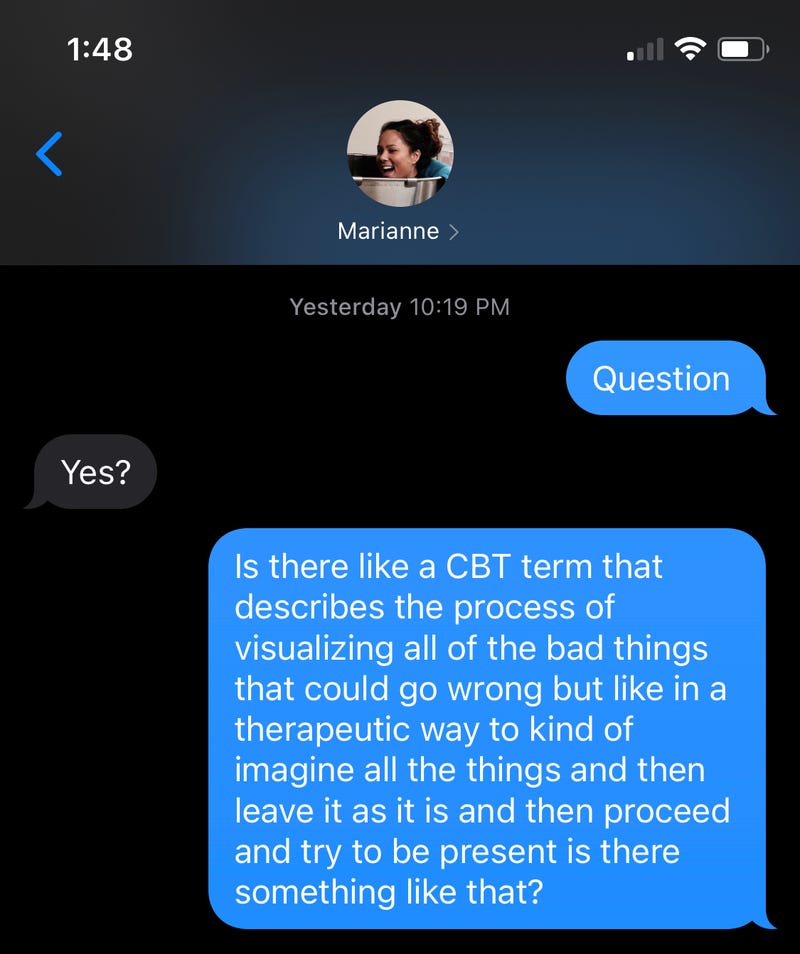 The answer: catastrophizing the *potential* premature demise of the Vegas Golden Knights.

1.      The downside of Alex Pietrangelo

a.      Signing the biggest fish from the free agency pond has costs outside of the $8.8 million per year through 2026-27. Petro eats a lot of minutes and in those minutes are opportunities. Outside of Nate Schmidt, the opportunity cost of Pietrangelo on this roster in my mind is taken from Shea Theodore and his development. This is a guy who many include in their annual Norris trophy consideration along with Colorado’s Cale Makar and Vancouver’s Quinn Hughes. Despite the fact that Theodore has 38 points in 43 games played this season, a VERY healthy production line, I honestly don’t think he’s had a great season. Maybe I’m reading too much into his transcendent playoff performance in the bubble last year. Maybe he’s banged up or is hampered by his “upper body injury” earlier this season. Maybe I’m finding ways to poke holes in a good team in a short season. But the thing is about Theodore, I don’t think he’s a good defenseman, I think he has the makings of being a great one. But he’s going to have a hell of time reaching his full potential with Alex Pietrangelo sucking up as much ice time as he does. I’m not saying that it can’t happen with both of these guys on the roster, I’m just saying it makes it exponentially harder. There's not enough #1 defenseman ice cream cake to go around. Some say the mark of a solid defenseman is when you don’t notice when they’re on the ice … because they are so good that nothing bad happens, that play just goes on. But that’s not what Shea Theodore is, he’s a guy that makes you pay attention when he’s playing his best. And I just haven’t noticed him a lot this season and that concerns me. Even if he chalks up a couple assists on the PP, that’s what he’s out there to do, one expects that with the personnel VGK runs out for the man advantage. Listen, Pietrangelo is a good defenseman and I’m glad he’s on this team... I don’t think we’ve seen him play his best hockey yet either considering how topsy-turvy his first season here has been. But his presence on this roster comes at a cost and I think most of that cost is the true potential of Shea Theodore. He’s a special player or at least has the tools to be and when he’s playing his best the team responds to him.

a.      The D gather the puck in down low in the defensive zone, we must get this out of here.

iii.     Breakout option #3: Up the wall but slightly off the boards

b.     Breakouts are too predictable, pinching D or high FWD disrupts everything often. Disrupted plays with VGK’s often offensively overzealous tendencies can result in forwards leaving the D zone too early or taking themselves out of position to make a potential defensive play. Too much risk for turnovers and leaving defenders out to dry in way too much space you’d like to give to your opponents to work with.

c.      In the offensive zone … way too much play above the tops of the circles that doesn’t include feeding the VGK defensemen on the point. Remember a few weeks ago when the Knights were struggling to stay onsides? THAT’S the problem, too many lateral moves or passes in the wrong areas of the ice. IF you’ve got enough steam to take the puck through the neutral and enter the offensive zone, you certainly have enough to get that puck down low to an area of the ice where the cost of a turnover or mistake isn’t catastrophically high. It’s one thing to have strong possession, it’s another to try to settle down a puck or disjointed offensive presence. It’s quite another to base your offensive attack from that specific area on a consistent predictable basis. Let’s not forget, VGK D are offensively minded and play off of wall to take full advantage of time and space to create. That mindset can lead to overpowering offensive pressure, but it comes at the expense of their ability to pinch down on contested pucks dribbling up the wall which breeds a lot of mistimed decisions (just as good as wrong ones) and leaving your partner flat footed on an island with a lot of bodies in motion heading the wrong way.

a.      I love a good Max Pacioretty one timer clapper from one knee as much as the next person but sometimes I think the people on the International Space Station can see it coming. And why wouldn’t you feed that option, he’s one of the best goal scorers and shooters in the game. VGK is paying #67 seven million dollars a year to score the goals. But when teams take away the cross slot pass on the PP, more times than not VGK keeps trying to ram that sucker through. It’s like trying to beat the goalie by shooting the puck directly into the logo on their jersey. Not only do you not score but you feed the beast that you’re battling to defeat.

b.     Diversification is the key word my friends. It’s about changing the source location of the offensive attack. About being able to attack from a different area in the ice and finding a way to sustainable success if your option A is taken away. VGK is just starting to get this going but if they’re not scoring on a regular basis already to keep their confidence high, it’s so hard for this team to switch gears and find their game. Plus when the cross slot pass is YOUR THING, that’s how you start every play, that’s the premise from which you create every idea. Lack of diversity saps your creativity, it makes you one dimensional, it limits the possibilities that your brain scrolls through in the milliseconds where decisions and plays are made.

This is the definition of what’s going on when you hear coaches say their players are “gripping their sticks a little tight”. It’s the physical manifestation of the bottlenecking of fluid creativity and hockey imagination. If you’re playing confident, you have to find that imagination AND your scoring touch. Tall task and a bigger ask.

a.      Sometimes the Golden Knights struggle with the concept of quality over quantity in the shot department. In an effort to live by that creed and as a former goaltender myself, games where I was getting peppered with shots were the best because there’s nothing more fun than a me-against-the-world goalie mentality and honestly I played better. VGK is no stranger to having their soul stolen in big moments (see Vancouver’s Thatcher Demko’s performances in the playoff bubble or more recently Cam Talbot the last time the Wild played in T-Mobile).