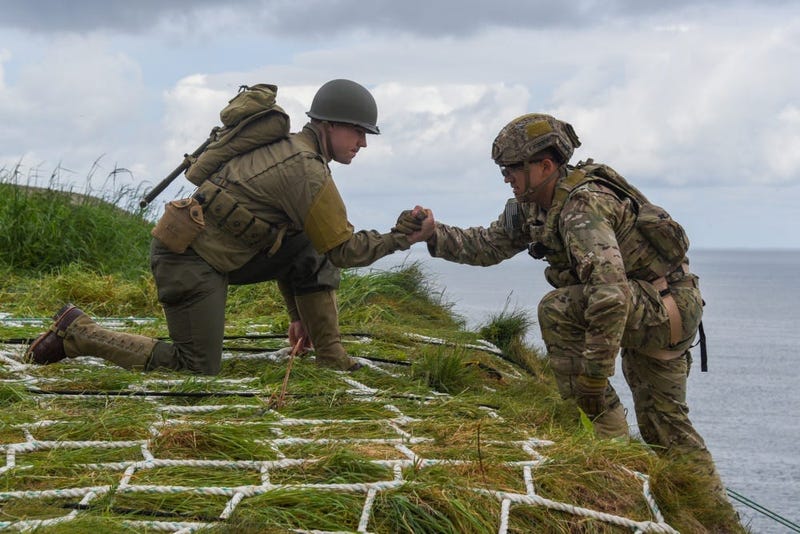 It was on the bloody shores of Omaha Beach on D-Day that US Army Rangers gained their motto, "Rangers lead the way."

Now with the passage of a bill in the US Senate and growing support in the house, Rangers who served in World War II are leading the way to receive one of America's highest honors.

The bill was introduced by Sen. Joni Ernst (R-Iowa) who is herself an Army veteran with 23 years of service in the Army Reserve and National Guard.

"So many Rangers that had served in various eras have reached out to me and asked me to spearhead this because I had connections to the Ranger Regiment and Ranger Rendezvous at Ft. Benning, Georgia," Sen. Ernst told Connecting Vets in a recent interview.

"It takes a while to move these bills but we did have a lot of support and now having it passed unanimously in the Senate last week was a thrill for us," she said, explaining that the bill has a special significance to her because she had the opportunity to meet many Rangers who served in World War II in the 1990s at Ranger Rendezvous. The rendezvous is an event organized at Ft. Benning every other year which brings together all three active-duty Ranger battalions with veterans of the Rangers from previous conflicts.  Ernst observed that World War II veterans were in awe of their modern-day counterparts, but the young Rangers also had so much admiration for their predecessors.

"These younger era rangers looked at these older men absolutely inspired by them having climbed the cliffs at Pointe Du Hoc," which happened on D-Day in France. "That made such an impression on me," Sen. Ernst said.

As for the bill known as S.1757, Sen. Ernst feels there is no time to waste as there are only about 30 World War II era Rangers still alive. "It's a great way to say thank you to these extraordinary men," she said. "We want to honor their legacy. They were the elite of the elite."

David Williams, the President of the Descendants of WWII Rangers said in a released statement that said, “we are extremely pleased that the national recognition for the many combat achievements of our WWII Rangers has passed this first milestone with the Senate passage. It is also very gratifying that it passed with unanimous consent in the Senate." Williams added, “we are hoping that the Congressional Gold Medal can pass the second milestone—passage of the House bill H.R.5002—so that the medal can be presented in mid-2021."

Sen. Ernst said her office is coordinating with Rep. Dan Crenshaw (R-TX) who will take the lead for supporting the bill in the House.