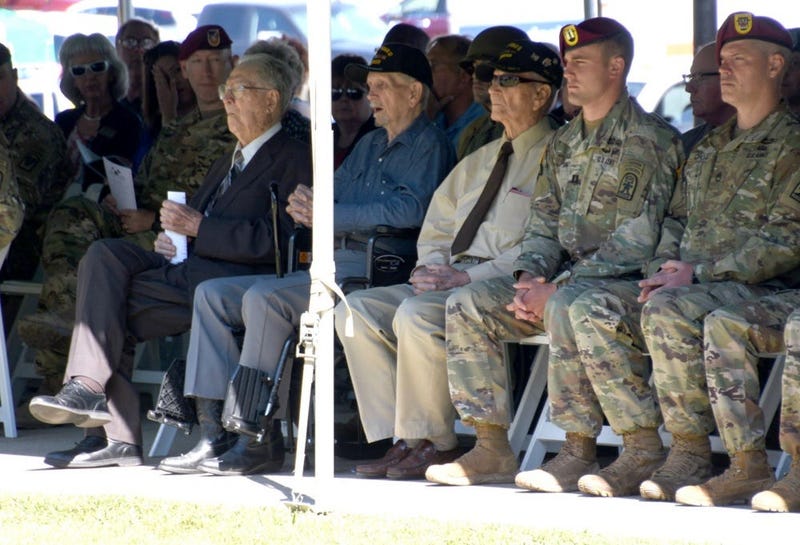 Today, Veterans Day holds a place of veneration for much of the public which continues to hold the military in high regard. Unlike in WWI and WWII, and even the Vietnam War, there was no draft in place for the Global War on Terror which has now been ongoing for two decades. Six million Americans volunteered to serve in the military during WWII while ten million were drafted or about 11% of the U.S. population at that time.

During the current “long war” against terrorism, only .4% of Americans serve in the military, far fewer experiencing combat. In previous wars, large numbers of Americans served. Today, veterans make up a unique class of people in our country. For the veterans themselves, having a federal holiday dedicated to them elicits a number of different responses. Veterans are by no means a monolithic group, and responses to the holiday among vets run the gamut from pride to sarcastic scorn.

A psychological operations (PSYOP) soldier joked, “it's a day we get free meals, am I right?” -- referencing the many chain restaurants offering free meals to veterans on the holiday, something that many service members find amusing, although no one would mock a hungry and destitute veteran who may need a free meal at Applebee's.

The former NCO's joke is further explained by Ken Schockli who served as a combat engineer with the 588th Engineers in 5th Infantry Division.

“As vet numbers dwindle, the national significance is diminished,” Schockli told Connecting Vets. “Individually, the holiday tends to point an embarrassing light on those of us looking for no special recognition.”

That there are fewer veterans than in previous eras of American history, but that America is in many ways even prouder of them today than they were in past, far bloodier conflicts, creates an interesting dynamic for today's veterans. Many see themselves as standing in the shadows of their fathers and grandfathers who fought fascism and communism in Europe and Asia.

“It's a day for spotlight rangers looking to be patted on the back, or almost dislocate their shoulders trying to pat their own back,” said Alejandro Esteban who served as an Infantryman in 2nd Ranger Battalion.”

“I also see a sea of vet bro company T-shirts. They may also try their hand at humble bragging. Then there are guys who will make a (social media) post thanking the people they served with or a family member who also served for their service,” he told Connecting Vets.

“Then there's my favorite. The quiet vet out with family, who wants zero recognition, and to move on with life who you can see was dragged out by their family.”

“How veterans look at the day evolves, we've been out long enough to identify the cycles of transitioning out of the military,” said Marty Skovlund who served in 1st Ranger Battalion. From his point of view, many veterans get out of the military filled with bitterness and anger, which influences how they perceive Veterans Day. But with time, they come to see it as just another holiday and probably as a good thing that helps civilians get to know veterans in their community.

“We get so wrapped around the axle about the right way and the wrong way to celebrate the day,” Skovlund said. “I'm not one of those guys that thinks of myself as a veteran so much. I think of my dad and my uncle who were vets and how that influenced me to join the military.”

"It's a great day behind the scenes to see so many people with generations of shared experiences making new friends and basically just being kind to each other and proud of what they've each done," says Army veteran Elana Duffy who was severely injured by an IED blast in Iraq.

"But there's also the other side of the coin, of frequently being overlooked even among my fellow brothers and sisters-in-arms," Duffy continued. "Because I'm a woman, because I'm not marching, because I'm not wearing a T-shirt about how disgruntled I am, I can wear all the lapel pins in the world and still be overlooked as a veteran. While I'm not looking for the thanks or the free Bloomin' Onion without needing to show ID, I do feel as though I'm missing out on some of the camaraderie that comes with the immediate recognition of shared experience."

“As a mother of three young men who are forever changed, I cannot express my mixed feelings," says Jody Harter Stevens whose son served as a Green Beret. "This holiday is meant to acknowledge the sacrifices of the individual. It was meant to give thanks to those who chose to serve.

“Our communities in this rural area hold a 'Silent Watch.' We stand and sing the National Anthem. The podium area has red, white and blue banners dangling, blowing in the breeze,” she told Connecting Vets.

“We stand silent as a few veterans read their words of wisdom. They tell us what they want us to know. They tell us of their own experiences and of their love of family, community and country," she continued. "As a community, we stand silent, we listen, we sometimes bow our heads in reverence, in sorrow; we sometimes stand tall with chest thrust out in a show of proud admiration. I see it as an important day to be able to educate our communities. Get some truth in there and still honor those who served.”

And yet, she also described the pain of having a son, James Hupp, who served honorably in Special Forces, but later died by suicide after leaving the military.

To her, the flip side of Veterans Day is that it, “seems more like serving a little slice of shit cake. You know, like a beautifully decorated cake with the most delicious icing, decorated, tasty looking, mouth-watering, and inviting you to cut your own piece. You cut into it... and BAM! Shit gets real.”