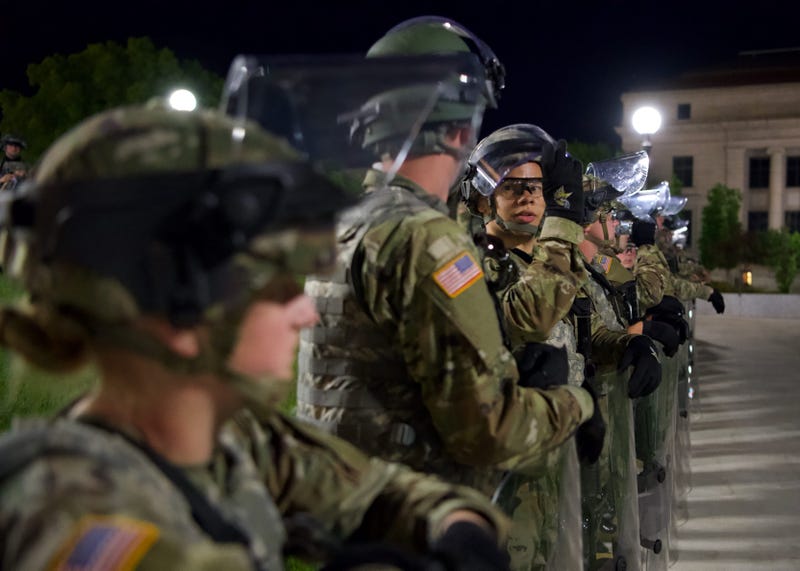 The National Guard has now activated 17,000 troops in 23 states in response to protests across the country -- an increase from 5,000 troops activated in 15 states over the weekend. The number of activated troops is expected to continue to grow.

Protests in response to the death of George Floyd, a handcuffed black man, at the hands of a Minneapolis police officer began in the Minnesota metro area last Monday but have since spread across the country and increased in violence. National Guard troops have been deployed to help “protect life” and “preserve public safety.”

The first National Guard troops activated in response to the protests were sent to Minnesota in the largest domestic deployment in the state's history. These troops were equipped with rifles, sidearms and ammunition because of a "credible threat" against them, according to the FBI.

While D.C. Mayor Muriel Bowser said she requested 500 Guard troops be activated in response to protests in the nation’s capital, the entire D.C. Guard force -- 1,200 strong -- has been activated by Army Secretary Ryan McCarthy.

While DoD officials have not asked for active-duty forces to support the operation, some active-duty units have been put on increased alert for possible response.

"At this time, we have not asked for the Department of Defense to give us active-duty forces to support this operation," Army Maj. Gen. Jon Jensen said in a news briefing held by phone. Jensen is adjutant general of the Minnesota National Guard.

Pentagon puts military police on alert to go to MinneapolisActivations in response to the protests are being piled on top of the already considerable number of Guard troops who have been activated in response to the COVID-19 pandemic. In total, 62,000 National Guard troops are currently activated. --Reach Elizabeth Howe on Twitter @ECBHowe.Want to get more connected to the stories and resources Connecting Vets has to offer? Click here to sign up for our weekly newsletter.