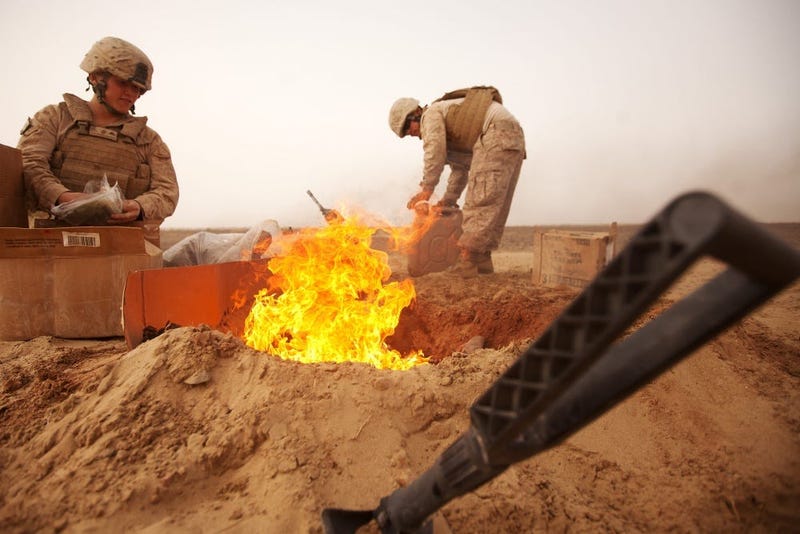 As many as 3.5 million veterans may have been exposed to airborne toxins since 9/11, according to the Department of Veterans Affairs.

When Wounded Warrior Project surveyed 134,000 wounded, injured and ill veterans and service members, more than 70 percent said they had been exposed to hazardous chemicals or substances, what the veteran service organization calls a "cross-generational problem."

But of those, just 9.3 percent said they had received treatment for their exposure at the VA, and about 31 percent were enrolled in the VA's Airborne Hazards and Burn Pit Registry.

Another about 12 percent of those service members and veterans said they tried but were unsuccessful in getting treatment at VA for toxic-exposure related illness.

Those who reported toxic exposure were also more likely to say they were in poor health -- nearly 90 percent of those who said their health was poor or fair in the WWP survey also said they had likely been exposed to environmental hazards during military service.

"Although we do not clearly know why so few veterans seem to be receiving treatment at VA, our assumption is that access issues are driven by a lack of communication with veterans on this topic and the difficulty of establishing service connection for illnesses believed to be caused by toxic exposure," said Joe Plenzler, WWP communications director for government and community relations. "Whether successful in receiving VA treatment or not, it is noteworthy that nearly 22 percent of surveyed Warriors reported seeking such treatment."

WWP presented some of those findings to Congress at a Senate Veterans Affairs hearing on the VA's decision-making process for toxic exposure disability benefits.

So far, VA and DoD maintain that one of the major post-9/11 toxic exposures -- burn pits -- lead to longterm illness.

"A significant number of post-9/11 service members and veterans (like their Vietnam-era counterparts), seem to be suffering from uncommon illnesses or unusually early onset of more familiar diseases like cancer," WWP told Congress in its testimony. "It appears that exposure to contaminants such as burn pits, toxic fragments, or other hazards typically seen on overseas deployments, are emerging as common threads among veterans who are sick, dying, or already deceased. We believe there is likely causation between deployments of the last 18 years."

WWP has also led the creation of a group of VSOs, researchers and other advocates, the Toxic Exposure in the American Military (TEAM) coalition, working to create omnibus legislation to address toxic exposures.