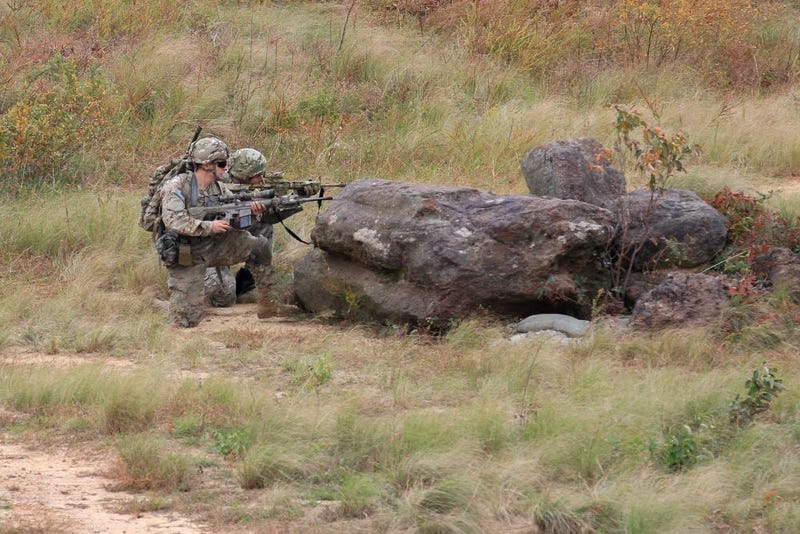 Two active-duty military police units have been put on four-hour standby to deploy to Minneapolis, where the police killing of George Floyd sparked widespread protests, the Associated Press reported today. Additionally, the 82nd Airborne's Immediate Response Force (IRF) battalion has been alerted to prepare to deploy within two hours to Minneapolis, a source told Connecting Vets.

Minneapolis police officer Derek Chauvin was arrested and charged with third-degree murder this week after video footage emerged of him kneeling on the neck of George Floyd, who died in police custody. Both riots and protests have erupted across the country in response to police brutality.

"The get-ready orders were sent verbally on Friday after President Donald Trump asked Defense Secretary Mark Esper for military options to help quell the unrest in Minneapolis after protests descended into looting and arson in some parts of the city," the Associated Press reports.

A source speaking on the condition of anonymity told Connecting Vets that the 82nd Airborne's IRF has similarly been placed on standby for short-notice domestic deployment. The 82nd Airborne received the standby order this morning, according to the source Connecting Vets spoke to. The IRF is a reinforced infantry battalion that is on standby to respond rapidly to crises worldwide. The IRF was last deployed on New Years' Eve to Iraq as tensions were reaching a breaking point between the United States and Iran.

Pentagon officials on Saturday denied that the 82ns Airborne's IRF was on standby for possible Minneapolis deployment.

"Off-the-record: This is inaccurate ... Not true," officials said in an email. No off-record agreement was negotiated with Connecting Vets.

"The Secretary of Defense and the chairman have personally spoken with Gov. Walz twice in the last 24-hours and express the department's readiness to provide support to local and state authorities as requested," Pentagon spokesman Jonathan Rath Hoffman said in an emailed statement. "Currently, the governor is fully activating the Minnesota National Guard and is working with neighboring states for more potential support. At this time there is no request by the governor of Minnesota for Title 10 forces to support the Minnesota National Guard or state law enforcement. As a prudent planning measure, the department has directed U.S. Northern Command to increase the alert status of several units should they be requested by the governor to support Minnesota authorities. These are units that normally maintain a 48-hour recall to support state civil authorities for several contingencies (like natural disasters) and are now on four-hour status.”

Trump tweeted on May 29 that he supports Minnesota governor Tim Walz, "all the way. Any difficulty and we will assume control but, when the looting starts, the shooting starts."

Twitter placed a warning on Trump's tweet saying it violated the platform's user agreement for glorifying violence. Trump pushed back with an executive order, arguing that section 230 of Title 47 of the U.S. Code should be repealed. Section 230 is a freedom of speech clause without which platforms such as social media sites, YouTube and online product reviews likely couldn't exist without liability issues for user-generated content.

....These THUGS are dishonoring the memory of George Floyd, and I won’t let that happen. Just spoke to Governor Tim Walz and told him that the Military is with him all the way. Any difficulty and we will assume control but, when the looting starts, the shooting starts. Thank you!

The Associated Press first reported that two military police units at Fort Drum and Fort Bragg have been placed on standby for rapid deployment.

While the Posse Comitatus Act normally precludes the deployment of active-duty soldiers domestically, there are a few exceptions, one of which is the Insurrection Act of 1807. After the Civil War federal troops were deputized and used for domestic law enforcement, some abusing their authorities which led to the passage of the Posse Comitatus Act (18 U.S. Code, Section 1385, 1878).

Other exceptions exist as well. Sgt. Maj. Mike Vining recently described in an interview that when he was an operator assigned to Delta Force in 1987 that Posse Comitatus was lifted for Operation Pocket Planner. Cuban refugees had rioted at a prison in Georgia and the FBI was quickly overwhelmed. Active duty Delta Force snipers and experts in explosive breaching were called into the assist the FBI if needed, however, the riots were quelled through negotiation.