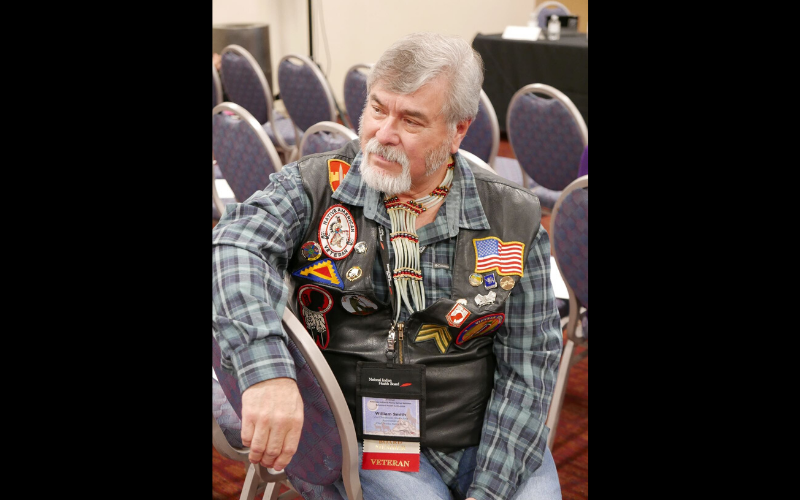 William Smith and his brother both served in Vietnam, his brother a few years before him.

Smith's brother died of Agent Orange exposure, lying in a hospital bed, fighting to breathe until the end.

"When I look at this COVID-19 going on, I see my brother lying in that bed in the hospital," he said. "They weren't able to get him healthy enough to transfer to Seattle, so I just watched him pass away with a tube in his throat just gasping for every breath."

For Smith, 67, chief of the Valdez Native Tribe, his brother's fate stands as a stark reminder of the risk to veterans that the coronavirus poses, especially in the remote areas of the nation's largest state, where many are increasingly isolated and cut off from help. Smith is vice chairman of the Alaska Native Health Board and serves as vicechairman and Alaska-area representative for the National Indian Health Board.

Native American and Native Alaskan veterans struggling to access adequate health care is not a new problem. It's a continuous battle, Smith said, and the Department of Veterans Affairs resources they do have were facing a backlog long before COVID-19 struck -- in rural and urban areas.

Native veterans are more likely to live far from VA facilities, tend to have lower personal incomes, higher unemployment and lack health insurance compared to their fellow veterans, according to the National Congress of American Indians. When they do receive care, they often face major cultural and language barriers. Native veterans also struggle to form tribal veterans service organizations, which could help navigate the sprawling bureaucracy of the VA and its claims system.

All this could place them at greater risk during the pandemic -- and not just from the virus.

Native veterans face much higher rates of post-traumatic stress disorder, suicide and other issues shared by fellow veterans. In some cases, Native veterans are twice as likely to have PTSD, according to the National Indian Health Board.

"There's a backlog of claims, they can't find a lot of their records -- it's really hard to get people the service they need," Smith told Connecting Vets. "Even I live 300-some miles away from the VA hospital in Anchorage."

Native Americans and Native Alaskans are more likely to serve in the U.S. Armed Forces than any other group, yet they remain among the poorest and least insured veterans with the least access to Department of Veterans Affairs services.

"We've always been warriors that step up," Smith said. "One of the things we believed in was that should we go to the front lines, our country would take care of us when we came home."

Smith, like his many of his fellow veterans, is disabled and his preexisting health conditions mean that even if he did travel to the nearest VA hospital hundreds of miles away, he would be putting himself at risk.

"With the higher population in Anchorage, it's not worth the risk of going there," he said. "I picture myself in that same bed as my brother and I don't think I want to go out that way -- with a tube in my throat, struggling to breathe."

It's unclear how many Native veterans may have contracted the virus. VA officials have repeatedly refused to provide a breakdown of virus cases and deaths by race or ethnicity, though the department did warn that its statistics showed black and Hispanic veterans may be at higher risk.

The single data point VA has for all of Alaska on its site tracking COVID-19 cases shows eight veterans testing positive in the state and all but one are convalescing -- meaning they're in recovery or it's been at least 14 days since they tested positive. VA has reported no deaths in Alaska so far, though it's unclear how many tests the department has administered there.

When asked whether VA was providing additional resources to Native veterans in Alaska, VA Press Secretary Christina Noel did not provide any examples, saying only that the tribes and VA work together closely.

"The Alaska VA Healthcare System works very closely with the Alaska Tribal Health System, the largest healthcare system in Alaska," Noel said. "The existing relationship between VA and the tribal health consortiums in Alaska is robust and substantial, allowing our veterans (both Native and non-Native) to be seen in virtually every tribal health facility across the state."

Smith said he was unaware of any additional resources VA deployed to help Alaska Native veterans.

Native veterans struggle even to sign up for VA health care, let alone get the care they need, Smith said, and the lingering traces of their service could put them at higher risk for the virus.

"I may not have died in Vietnam, but I cam home and it's like I was killed in action, it's just taking me a long time to die," Smith said of his exposure to toxins in Vietnam such as Agent Orange. "The same thing is happening with our veterans exposed to burn pits today."

Local medical centers partner with VA to provide a network of services for Native veterans, but even those hospitals and clinics are overburdened or temporarily shuttered, Smith said. And veterans trying to file disability claims have met issues over recent months getting claims processed, with VA focusing more resources on COVID-19 response, limiting or postponing exams needed to process those claims.

VA facilities nationwide halted all nonessential medical and behavior health appointments during the pandemic to free up resources for virus response and to limit risk to other patients and staff. Some veterans' appointments were moved to telehealth. But telehealth only works for patients who have reliable internet, cellular and technology access.

"Even with PTSD and mental health, with the lockdown, they can't get in to get evaluated," Smith said. "So there's really no help for them because they're not getting the evaluation they need to start the disability claims process. We're missing resources."

Some Native veterans are depending on private organizations such as 907 Vets, working to help former service members and their families with their mental health, Smith said.

Native veterans who live in more remote areas of the country, including parts of Alaska, face even more challenges -- they're suddenly even more isolated.

Flights that kept further-flung areas of Alaska connected have been shut down, cutting off those communities from resources.

"These small communities all over the state are struggling about how to get in or out of the villages," Smith said. "The financial burden to charter a plane to fly out or to get groceries ... Without our airfare service, people are in trouble. It's pretty dramatic."

Late last year, Smith and other Native leaders and advocates traveled from all over the country to Capitol Hill to tell Congressional lawmakers about the challenges Native veterans face, despite histories of service older than the United States itself.

While Secretary Robert Wilkie and Veterans Health Administration executive in charge Dr. Richard Stone were asked to attend that hearing, they did not, frustrating lawmakers and Native veteran representatives.

"We need help fixing the backlog and getting these people care," Smith said. "They were promised they would be taken care of when they signed that dotted line."

The $3 trillion pandemic relief stimulus bill introduced by Democrats this week includes a measure to provide aid to Native veterans. Amid the nearly 2,000-page spending proposal was a provision to expand covered care for Native veterans during the pandemic, requiring the VA and Department of Defense to reimburse Indian Health Services for care it provides those vets, regardless of whether the eligible veteran received care from IHS or a contracted health provider.