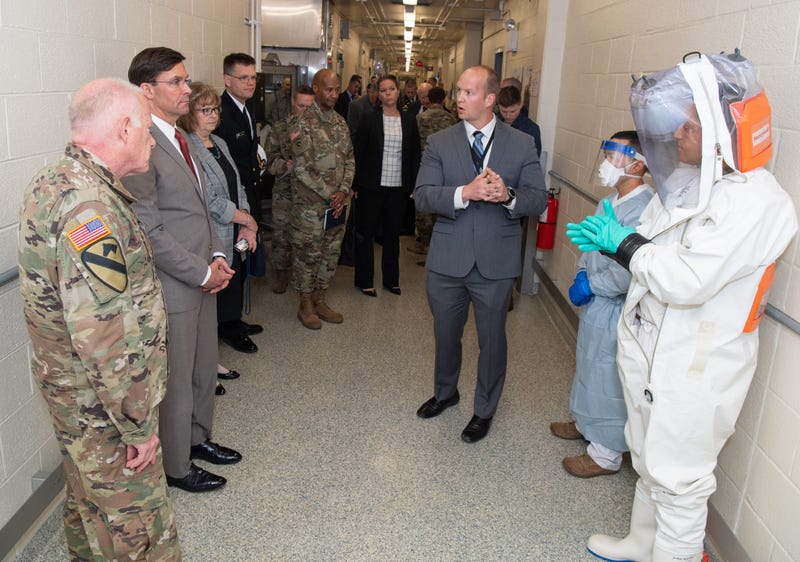 The Army's Medical Research Institute of Infectious Diseases in Maryland has started testing its coronavirus vaccine on primates — but it will still be months before those vaccines are available to the public.

There are five different clinical vaccine trials ongoing at the institute, Brig. Gen. Paul Friedrichs, Joint Staff Surgeon to the Joint Chiefs of Staff said at a Pentagon press briefing on Monday. And while work on the vaccines is progressing "as fast as it can," it takes time to make sure they are safe, he said.

"Once we know that they're safe, then we expand the testing candidates," Friedrichs said at the briefing. "We are still months away, not weeks away... as we step through doing this as safely and effectively as possible."

Joint Staff Surgeon @USAirForce Brig. Gen. Paul Friedrichs discusses where we are with vaccines for #COVID19: "We are still months away, not weeks away... as we step through doing this as safely and effectively as possible."@DeptofDefense @CDCgov @HHSGov pic.twitter.com/qILcmUkMPR

Animal testing precludes human testing — a step that some other vaccine development ventures have recently reached. Inovio Pharmaceuticals in Pennsylvania announced just yesterday that it would begin phase one of its clinical trials.

In addition to vaccine research, the Pentagon is also conducting trials with hydroxychloroquine, according to Friedrichs.

Weeks ago, President Donald Trump touted chloroquine as a possible treatment or "cure" for COVID-19. As it is primarily used as an anti-malarial drug, chloroquine is well-known to military personnel — as are its numerous negative side effects.

“Particularly among military veterans, in whom these drugs have been widely used for decades as prophylactic antimalarials, these symptoms can mimic and be mistaken for those of post-traumatic stress disorder and traumatic brain injury," said Remington Nevin, former U.S. Army public health physician and executive director of The Quinism Foundation.

Friedrichs said during the briefing Monday that hydroxychloroquine is not being widely distributed as a COVID-19 treatment measure — but clinical trials are being conducted in small groups.