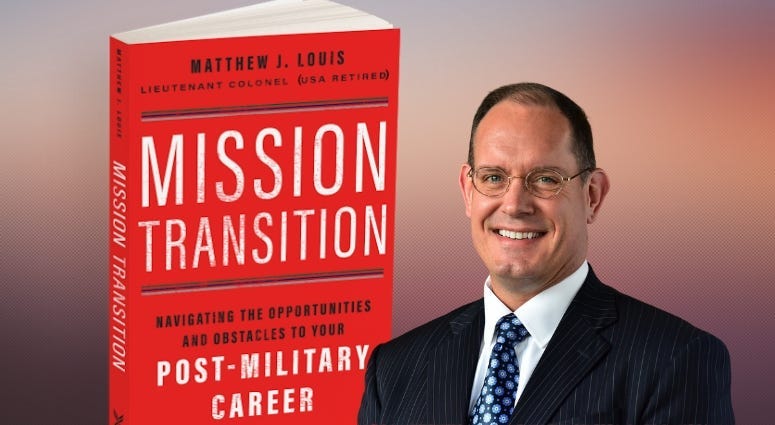 There’s a new resource that can help veterans on a mission to transition to a civilian career after leaving the military.

Matthew J.Louis’ new book, "Mission Transition: Navigating the Opportunities and Obstacles to your Post-Military Career” serves as a practical guide for both transitioning veterans and their employers.

A graduate of West Point, Lous spent 25 years in the Army and retired from the Reserves as a lieutenant colonel. He serves as the veteran transition officer for his West Point class and coaches veterans as they transition and offers advice to employers on hiring programs that can make that transition successful.

Louis said that there are a number of reasons why veterans struggle as they transition. Many hiring managers simply don’t understand how the skills a veteran learned in the military translate to the civilian workspace.

“There’s this huge gap we need to overcome,” he explained

Currently the head of global strategy and transformation projects for Deloitte, Louis said transitioning veterans need to redefine themselves to bridge the civilian-military divide. And, veterans should understand that transitioning doesn’t happen overnight.

Show us the money: Vets make more than civilians

Networking is a key component in a successful transition, he said.

But, networking can also present a host of other challenges that transitioning veterans have to overcome.

“The difficulty is for most folks coming from the military, networking tends to take on or have a bit of a negative connotation,” he explained. “Folks in the military tend to view networking as kissing butts to get ahead.”

In reality, Louis said networking is a process in which both individuals participating in the conversation benefit.

Veterans transitioning out of the military should also make use of their “tribe,” the thousands of other vets who have already gone through the process by connecting through social media.

“There are literally hundreds of thousands of your brothers and sisters in arms awaiting you on the other side to help you cross and set you up for success,” Louis said.

Reach Julia LeDoux at Julia@connectingvets.com.
Want to stay more connected to the stories and resources Connecting Vets has to offer? Click here to sign up for our weekly newsletter.