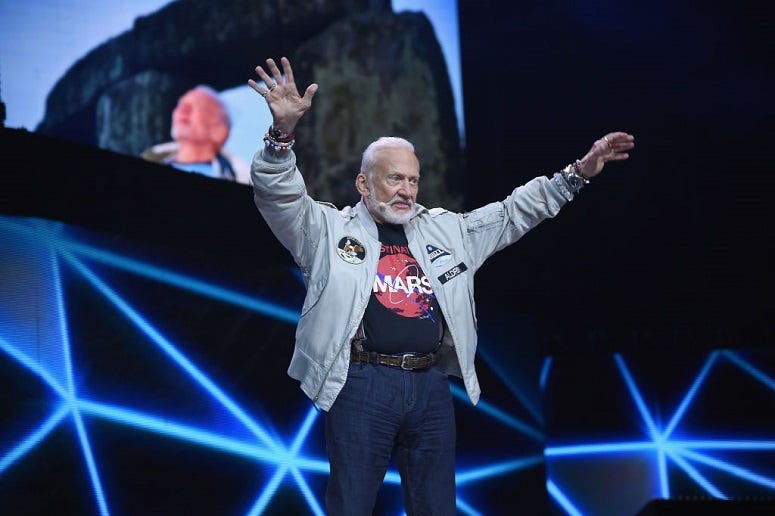 As a former fighter pilot, an MIT grad and one of the first human beings to ever walk on the moon, we didn’t think legendary astronaut Buzz Aldrin could get any cooler.

But after watching the video of him punching a heckler in the face, we have a whole new kind of love and admiration for him.

The Youtube video posted by space enthusiast Accutronitis The 2nd, shows Aldrin and an associate starting to cross the street while being followed by a film crew.  A man in a dark sports coat carrying a Bible quickly steps in front of Aldrin and repeatedly asks, “Why don’t you swear on the Bible, that you walked on the moon.”

Aldrin heads back to the sidewalk and says to a hotel bellman, “Tell him to get outta here or we’ll call the police.”

Buzz Aldrin: Remembering Apollo 11, the moon, and why we should be doing more

The cell phone video, which appears to be from 2002, continues to follow the man as the bellman attempts to keep him from approaching Aldrin, who was by then standing a few feet away by the building’s entrance.

But the heckler makes another push toward Aldrin saying, “You’re the one who said you walked on the moon when you didn’t, calling the kettle black …

Aldrin again tells the man to get away from him.

But it’s when this conspiracy theorist calls him “a coward and a liar” that Col. Aldrin decides it’s time for takeoff.

Within seconds of the insult, Aldrin connects his lunar fist with the man’s face.

The 8 coolest astronauts who are also veterans

The video ends with Aldrin out of frame, but the video’s editor was kind enough to loop the punch several times so we can enjoy viewing the solid punch and hearing what sounds like a boxing glove hitting a heavy bag.

Want to get more connected to the great stories and resources Connecting Vets has to offer? Click here to sign up for our weekly newsletter.
Follow Phil Briggs @philbriggsVet