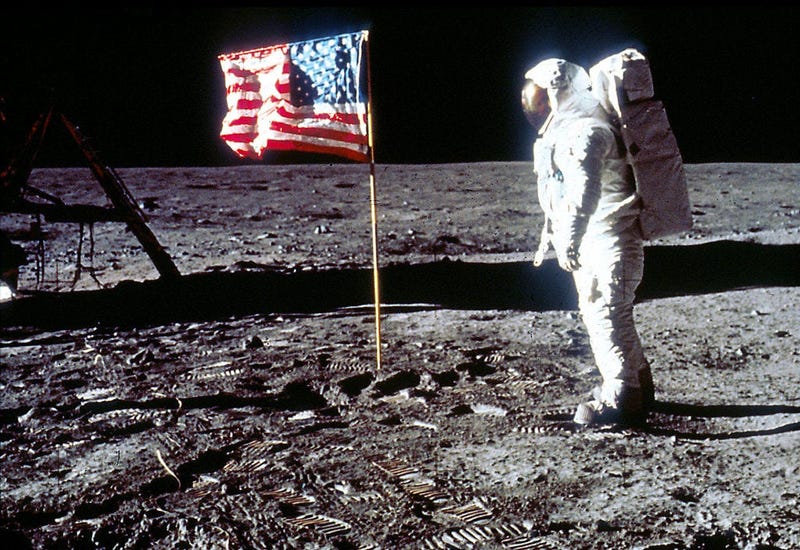 Moments after becoming one of the first people to ever walk on the moon, astronaut, fighter pilot and American legend Dr. Buzz Aldrin spoke these prophetic words to mission control, “We feel that this stands as a symbol of the insatiable curiosity of all mankind to explore the unknown.”

Now 50 years after the historic Apollo 11 mission, Aldrin is still offering inspiring quotes about the moon, a mission to Mars and the unbreakable American spirit.

“Even now, we say to ourselves, if America put men on the moon, what can’t we do?” recalled Aldrin during the recent Apollo XI  50th Anniversary Gala. 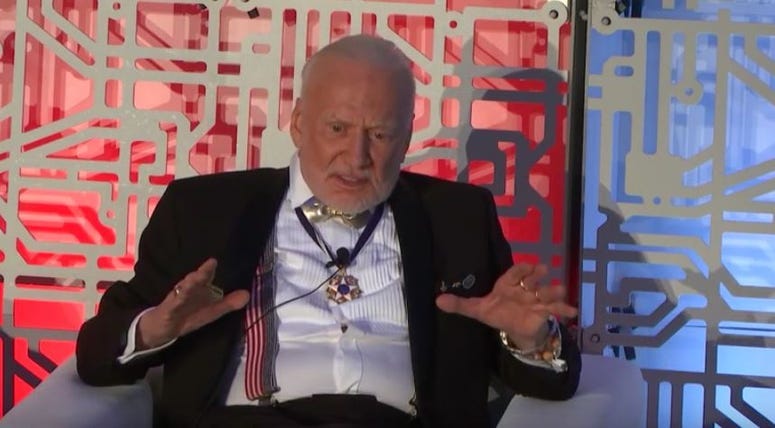 From the stage inside the Ronald Reagan Presidential Library in Simi Valley, CA. Aldrin sat on a panel with fellow astronauts Charlie Duke and Walter Cunningham and answered questions about his life and the mission that inspired the entire world:

Can you offer a few insights into the launch of that Saturn 5 as you headed for the moon?

Aldrin:  “Well, getting into space always starts with the launch … As we headed for the moon, a lot had gone into this … We had all seen preparations for a launch go down to seconds, then have to start over – and so I think we were relieved when the launch went ahead.  It went smoothly, and at last we were on our way!  Launch was almost imperceptibly smooth through the early abort modes, and nothing unexpected happened.  We knew we were accelerating, but the launch was so smooth compared to Gemini launches that we did not know the instant of leaving the ground.  We only knew it from the instruments and voice communications which confirmed lift-off.  We saw our rate of climb, altitude changing, but were comfortable in our seats.  We sort of looked at each other and thought, ‘We must be on our way …what’s next?’

How about thoughts on being on the moon, once you got there?

Aldrin:  “As for being on the moon, well, getting down was interesting. As we approached the moon, we leveled off and kept moving down and forward to land.  We knew we were continuing to burn fuel.  We knew what we had, then we heard 30 seconds left.  If we ran out of fuel, we knew it would be a hard landing!  We saw the shadow cast in front of us.  That was new, not something we saw in the simulator.   I saw dust creating a haze, not particles but a haze that went out, dust the engine was picking up.   The light turns on, I said ‘contact light,’ ‘engine stop’ and recorded ‘413’ in, so mission control knew abort guidance shut-down conditions were satisfied.   Neil remembers we shook hands, and I recall putting my hand on his shoulder and we smiled.”

How about once the engine was off, what happened next?

Aldrin:  “Once down, we climbed down the ladder and out.  As Neil descended, we heard mission control saying ‘getting an image, but upside down.’  They could see he was on the ladder.  I could see the top of his head from where I stood, then he said he was going to step off the LEM, and announced ‘One small step for man, one giant leap for Mankind,’ and he said ‘for man,’ not ‘for a man.’  Neil thought of that.  It wasn’t on the checklist.”

How about when you climbed down? 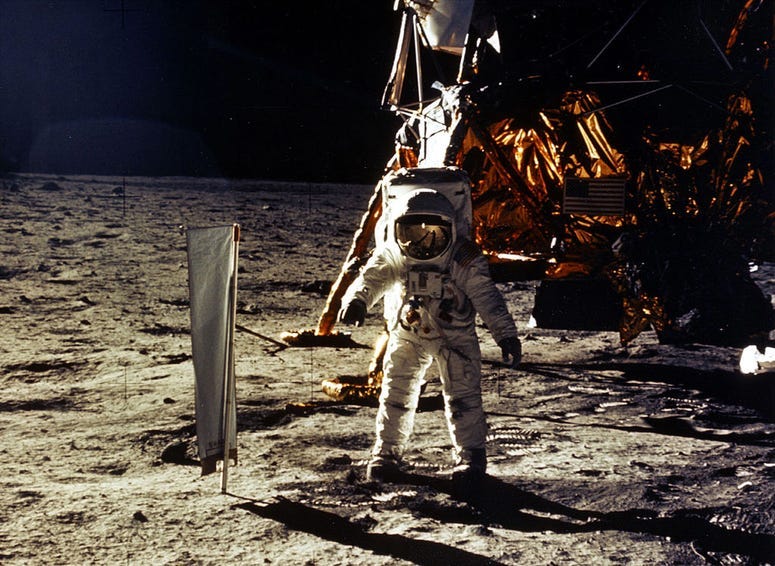 Above: The deployment of scientific experiments by Astronaut Edwin Aldrin Jr. is photographed by Astronaut Neil Armstrong. Man's first landing on the Moon occurred July 20, 1969 as Lunar Module "Eagle" touched down gently on the Sea of Tranquility on the east side of the Moon.

Did you pause to think about the enormity of it all, all the people watching you?

Aldrin:  “As for … those watching, we really did not think much about that.  We were focused on mission control … they were the people we had to think about most.  Transmissions did not occupy us much beyond mission control.  Neil decided where to put the camera, and I got out the two experiments and carried them.  We were focused on the experiments, making sure they were level, pointed toward the sun.  Funny story about the level, it was the sort with a cone and small ‘BB’ that has to settle in the center.  It just kept going around and around in one-sixth gravity.  I stepped away, did other work, and then came back – and found the BB centered and experiment level.  On the moon, a leveling device does not give level right away!”

How about on return and splashdown, any special thoughts?

Aldrin:  “Well, we would later relax in confinement, but at the time I focused on a procedure associated with splashdown … Coming down, we had to wait until we hit the water, and you are not quite sure what altitude you were at … On splashdown, we had to throw a switch to release the parachutes, only it was a bit bumpy, so we tipped over before we could release the parachutes, then the balloons tipped us right side up again.  It was good to be back, eventually to see and talk with family …When we arrived on the carrier deck, we were placed in a containment trailer, and it had a window.  When they played the national anthem, we wanted to stand.  But the window was very low, and we realized that if we stood by the window, at full height, they would only see our lower half, so we decided better to bend and kneel by the window.” 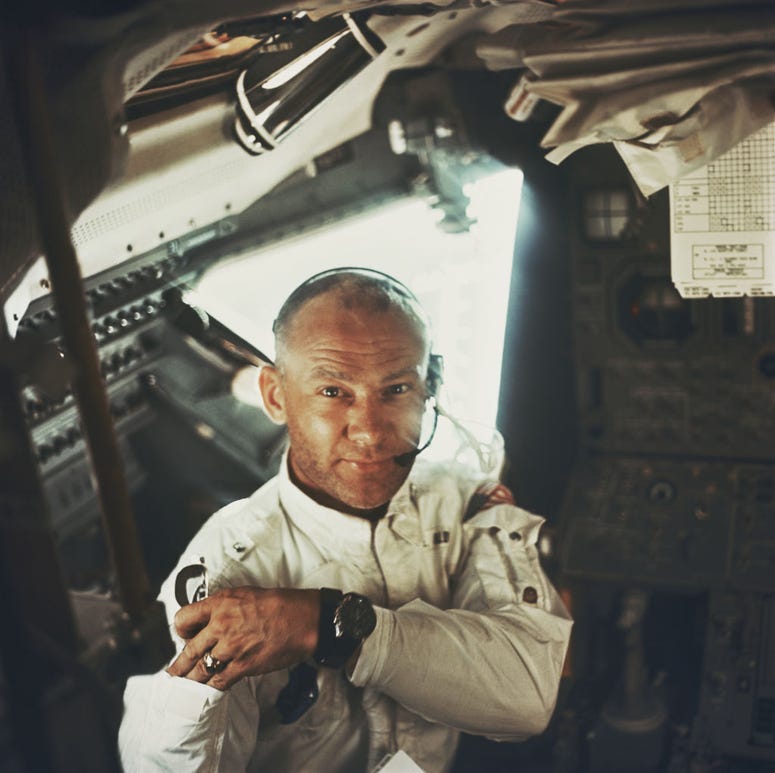 As you look to the 50th anniversary, at what happened in 1969 and now, what thoughts?

Aldrin:  “The Apollo 11 mission was many things to many people.  To me, it was the dream we had all signed up to chase, what we had imagined, worked and trained for, the apex of national service to a country we unabashedly loved, the height of aviation and exploration.  To my colleagues, as to me, Apollo was a mission of enormous national security importance – a way to prove America’s exceptional nature, pointing the way forward for Mankind in space and forward to peace here on Earth…  I sometimes think the three of us missed 'the big event.'  You smile, but while we were out there on the moon, the world was growing closer together right here.  Hundreds of millions saw their own reflection in our visors, efforts, the risk with purpose, doing what had not been done before.  Even now, we say to ourselves:  If America put men on the moon, what can’t we do?  And that sentiment is right.  We did then – and we can do now – whatever we put our combined minds to.  So, Apollo 11 was a dream-come-true, for all of us.  A launch so smooth we had to look at dials to confirm we were off; extraordinary journey made possible by tens of thousands of extraordinary patriots; a bit of excitement on the descent, then a wonderful walk-in 'magnificent desolation,' making footprints in moon-dust.  On return, it was knowing that we had done our job.  The eagle had landed.  We had walked, set out experiments, taken it all in, and left that plaque. ‘We Came in Peace for All Mankind.’  We lit the ascent engine and came safely home.  It all felt like, that is what America is, what we can do, when we are united in purpose.  Apollo showed that this nation, this America, can do whatever is required, when destiny calls on us to unify, and step up.  It was an honor to be a part of Apollo. That was how I felt in 1969, how I still feel … This is a blessed nation, truly blessed, and we are all lucky to be part of it.  I hope we never forget how lucky we are to be Americans.”

In a single lifetime, Dr. Buzz Aldrin has gone from being an engineer to a fighter pilot.  He has earned a doctorate in rocket science from MIT, piloted a lunar module and become one of the few Americans to have walked on the moon. With a life full so full of achievements, it would be easy to imagine Dr. Aldrin is content.

50 years ago today, Neil Armstrong, Mike Collins and I launched into space on a mission of enormous importance. God bless the 400,000 Americans who helped us get to the moon and back. Together, we Americans can do anything! Never forget July 16, 1969! #Apollo50 pic.twitter.com/lX6456UO2N

But as he reflected upon the historic Apollo mission, it was clear that he still thinks we have a long way to go.

“It was a privilege to have been able to undertake the first manned mission to the lunar surface, an honor to have worked with so many good and dedicated people, and to have left our footprints there.  Even now, sometimes, I marvel that we went to the moon.  But now, I think, it is time for the next generation to buckle up, get back to the moon, and get on to a permanent presence on Mars … It’s been 50 years of non-progress.  I think we all ought to be a little ashamed that we can’t do better than that.”