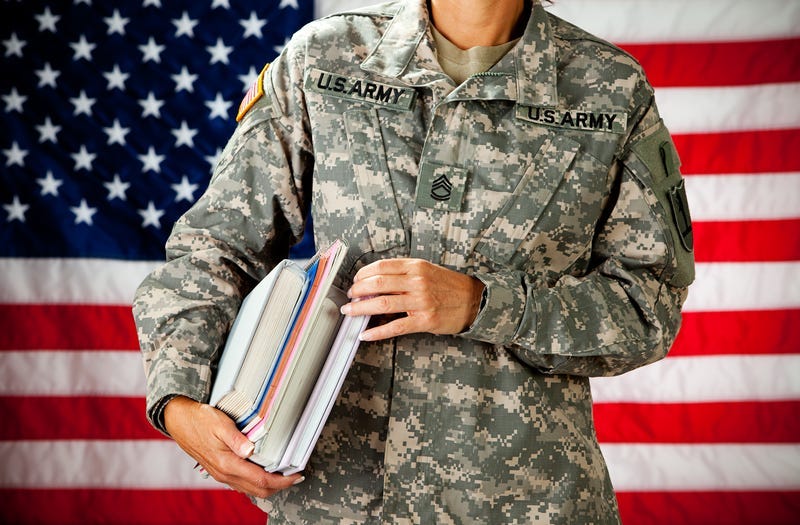 For-profit colleges target student veterans for financial gain — and Department of Education Secretary Betsy DeVos is making it easier for them to do so.

The Post-9/11 G.I. Bill has been around since George W. Bush's time and was expanded under the Trump administration. But the quality education this bill should be providing to veterans — veterans trying to continue their education, obtain skills crucial for jobs in the civilian sector, and continue their lives after service — is being deregulated by DeVos.

For-profit colleges have a lot to earn by targeting veterans. Namely, a much larger chunk of federal funding than they otherwise would legally have access to — thanks to something called the  90/10 loophole.

"For some reason, there's a loophole in the law that does not count G.I. Bill funds as federal funds," explained Tom Porter, legislative director at Iraq and Afghanistan Veterans of America. "Back when they made the determination, the G.I. Bill was not nearly as generous as it is today. Now, you've got schools that are predatory in that they see the dollar signs on student veterans."

So targeting veterans is exactly what they do.

And the student veterans — not surprisingly — tend to get screwed. Six of the ten schools receiving the largest amount of federal funding through the G.I. Bill have faced government legal action for defrauding students.

"This all results in additional low-performing schools that promise the world and, in reality, take a one-time benefit away from the veteran," Porter said. "It slows down their career path and transition from the military."

Essentially, taxpayers are paying for for-profit colleges to defraud student veterans. A VA internal audit showed that the government will waste $2.3 billion in improper G.I. Bill payments over the next five years if changes aren't made.

And DeVos is doing a lot to make sure those changes aren't made.

She has filled several important, high-level staff positions with members of the for-profit college industry. She is stalling legislation that would help defraud students rights to recourse. She removed a policy that required career colleges to prove their graduates could get a job. This week, she will meet with a panel to discuss numerous proposals that would further deregulate the quality standards colleges must meet — and a concerning number of the panel members happen to represent the for-profit industry.

"They can't make the case that what they're doing is helping student veterans," Porter said — and lawmakers and veterans agree.

.@BetsyDeVosED is emboldening the for-profit industry and making it easier for predatory institutions to target student veterans and cheat them out of their benefits. It’s up to Congress to hold these institutions accountable and protect GI Bill benefits. https://t.co/4m0uC1tbVA

"Standing up for veterans, and student veterans, should always be a bipartisan issue." Thanks to our fearless leader @jschmeling for bringing light to an issue that calls for a needed change to protect student veterans across our nation. @nytopinion https://t.co/nvq47t4IXT

"It appears from the Inspector General's report that VA remains out of compliance with the statute, despite numerous federal and state law enforcement actions against colleges for deceiving veterans. This has resulted in significant ramifications to VA and student veterans," the letter reads, referencing a statute that prohibits improper payments to ineligible colleges.

IAVA also attended a Department of Education briefing to provide testimony and ask that the department maintain its current levels of regulations for all schools.

“@iava asks @usedgov to maintain its current levels of regulations for all schools, and in doing so protect military-connected students who may be targets of predatory, low quality schools.” pic.twitter.com/QuhlJPjKUg

Catch Travis' recap of his appearance and comments at the Department of Education today on veterans education rule changes! #DefendTheGIBill https://t.co/E5FjNZs4vd

"We're very, very concerned about this," Porter said. "Even one veteran that gets screwed out of their Post-9/11 G.I. Bill because they weren't protected in the education process — that's one too many."