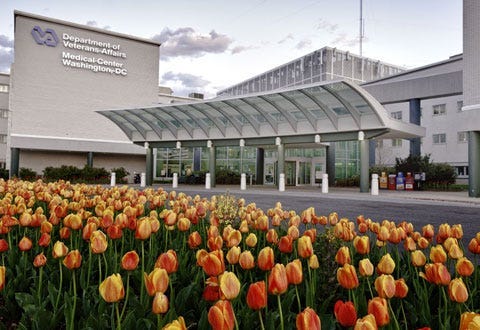 After a veteran and senior policy advisor on the Congressional Women Veterans Task Force said she was sexually assaulted at the Washington, D.C. VA Medical Center, a congresswoman has filed a bill to combat the issue.

Rep. Julia Brownley, D-Calif., on Monday introduced the Stop Harassment and Sexual Assault at VA Act, which would create a department-wide policy to stop "this epidemic of rampant" harassment and sexual assault Brownley says "too often occurs" at VA facilities nationwide.

Last week, Andrea Goldstein, a Naval intelligence officer now serving in the Reserves, said she was assaulted Sept. 20 in the atrium of the VA by a man she suspected was another veteran who slammed his body against hers, pressed himself against her and said "You look like you could use a good time."

Goldstein was waiting for a doctor's appointment and said she was carrying a draft of legislation to help combat sexual assault and harassment in her purse when she was attacked.

Brownley, who chairs the Congressional Women Veterans Task Force launched in March, said she has "continuously" heard from veterans about the prevalence of assault and harassment at VA.

"Shockingly, studies show that at least one in four women veterans experience sexual and gender-based harassment at VA facilities,” she said. Most recently, we learned about a case in California, where a VA doctor was convicted of sexually assaulting five patients. Two weeks ago, a member of my own staff was recently assaulted at the VA in Washington, DC while waiting for her appointment."

VA spokeswoman Christina Mandreucci told Connecting Vets Monday evening that VA had turned over investigation into Goldstein's attack to its independent Office of the Inspector General "and other law enforcement.

Earlier this year, Brownley said she urged VA to address the issue but "it has become abundantly clear that VA's internal policies are wholly inadequate and ineffective.

"For far too long, women veterans have been treated as an invisible minority and their concerns have not been heard. I want to say to them: we see you, we hear you, and we are working hard to ensure that you have safe, welcoming, and unfettered access to the benefits that you have rightfully earned.”

The bill not only requires a department-wide policy, it also requires VA to hold mandatory annual training for employees.

Goldstein said multiple people, including VA staff, witnessed her assault "out in the open" but most "said nothing." She said she reported her assault to multiple VA staffers, but it was not until she spoke to her doctor that the police were called.

Mandreucci said VA has not yet taken a position on Brownley's bill.

If you or someone you know needs help, contact the Veteran Crisis Line 24/7 at 1-800-273-8255 (select option 1 for a VA staff member). Veterans, service members or their families also can text 838255 or go to veteranscrisisline.net. For help with sexual assault, contact the free, confidential, 24/7 National Sexual Assault Hotline at 800-656-HOPE.
Reach Abbie Bennett: abbie@connectingvets.com or @AbbieRBennett.