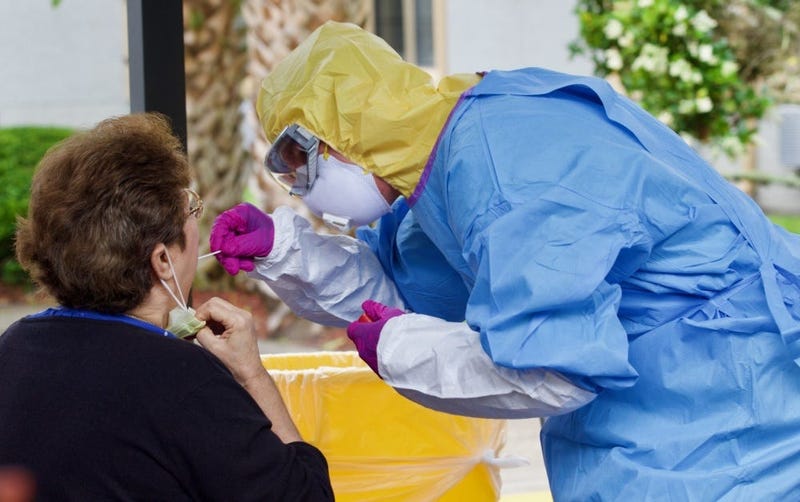 Black and Hispanic veterans may be at greater risk for the coronavirus, according to data collected by the Department of Veterans Affairs. But VA is not sharing that data.

At least 869 veterans have died of the virus so far, VA data showed on Monday. VA has more than 11,000 positive cases but is not releasing a breakdown of those cases by race. Veteran deaths have doubled in the past two weeks and the death rate -- about 8 percent -- is higher than the national fatality rate of about 5.8 percent.

An internal VA email from the Office of Health Equity obtained by Connecting Vets showed that a high proportion of positive COVID-19 tests administered by VA were among black and Hispanic veterans. The email said VA was working to reduce that disparity and seeking further outreach to veterans to get them tested and under care sooner if needed.

VA Press Secretary Christina Noel told Connecting Vets Friday that "preliminary testing data indicates that among those tested by VA, African American and Hispanic veterans are testing positive for COVID-19 at higher rates than other veterans."

Preliminary treatment data, though, shows that survivability of the virus in VA care, from the time of testing, "does not differ by race," Noel said.

VA did not provide any of the data and Noel did not respond to multiple requests for the data.

VA's data is "not yet statistically significant," Noel said, adding that VA is still using it to target outreach to veterans and VA facilities nationwide are using maps of community hotspots to direct outreach.

Most of VA's outreach to veterans is done by phone, Noel said, "which allows VA to educate patients about their risk while minimizing their exposure to others."

VA's data is similar to national trends that have shown African Americans and Hispanic Americans face significantly higher risk for the virus.

The Centers for Disease Control and Prevention last week said that death rates among black or African American patients and Hispanic patients were "substantially higher than that of white or Asian" patients.

Other groups of at-risk veterans include homeless veterans, who advocates say struggle to socially distance in shelters, lack access to hygiene items and running water and are facing closures of shelters across the country.

While the number of positive cases at VA has continued to rise for two months, the number of "active" cases at VA fell again on Monday -- a steady decrease for the past week. VA now has 2,642 active COVID-19 cases, an about 11 percent decrease from the previous week.

Those cases don't just include veterans, though. They also include VA employees, service members or Tricare patients and some non-military patients VA is caring for under its fourth mission.

VA officials said mortality rates for the department's veteran patients "cannot be used to compare VA infection or mortality rates with the community because of differences in population risk, test availability and follow-up."

At least 26 VA staff have also died because of the virus, VA data shows, of nearly 1,300 VA employees who have tested positive.