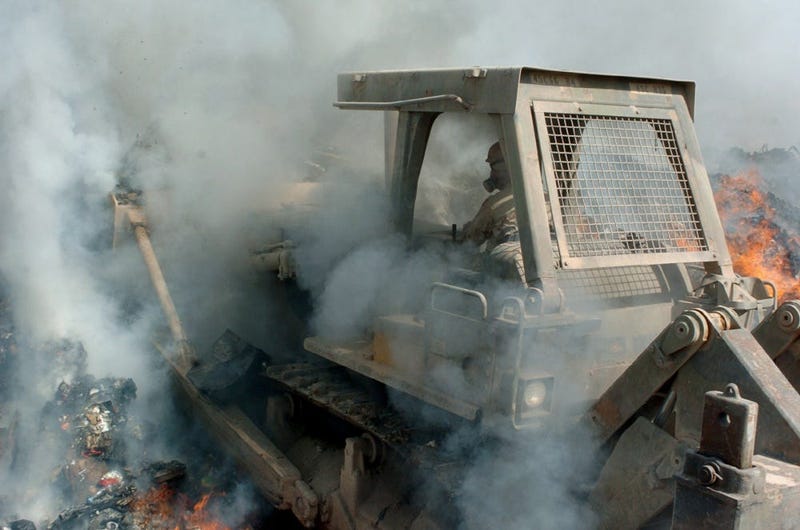 The Department of Veterans Affairs estimates as many as 3.5 million service members may have been exposed to potentially dangerous airborne toxins since 9/11. But many veterans may not know they were exposed, or struggle to prove their exposure.

But those maps are woefully incomplete because Defense Department data collected to determine health risks from airborne particulate matter is largely incomplete and unreliable.

The Center for a New American Security (CNAS) created the maps using that existing, publicly available data to show potential health risks to service members because of exposure to open-air burn pits while deployed.

The pilot project shows both health risks of exposure to burn pits and the confidence in those risk assessments through time. It uses Defense Department data for two types of particulate matter collected by the Periodic Occupational and Environmental Monitoring Summary (POEMS) maintained by the Army Public Health Center (APHC) from about 82 sites in the three countries.

The particulate matter in the report includes chemicals, dust and other airborne particles that can be associated with long- or short-term health risks.

But the quality and quantity of information available for different locations varies widely -- with some areas troops were located lacking any information at all.

Kayla Williams, report co-author and director of the CNAS Military, Veterans and Society program, was deployed as an Arabic linguist in a military intelligence company of the 101st Airborne Division. She said she, like many others, served in areas that lack any evidence of exposure in the POEMS reports.

"There's simply no record," she said, adding that the Defense Department created reports primarily for the most established bases, not combat outposts or forward operating bases. "Overall, it's not a terrific dataset."

The overall CNAS analysis showed that the military's "inconsistent collection, assessment, and presentation of available data seriously weakens the potential utility" of the primary source information on toxic exposures -- the POEMS files. That information is so unreliable that it's difficult to determine exact risks to troops. The data is lacking all locations and regular reports, so changes can't be tracked over time.

Of the reports that collected enough information, most were "not confident" in their assessments. The frequency of sample collection downrange was inconsistent and risk assessments themselves were "inconsistent and subjective," CNAS said in its report.

The Defense Department pulling back on burn pit use after negative public attention also means tracking trends in the existing data is difficult or even impossible, Williams said. A few burn pits are still in operation, but the Defense Department largely switched to other solid waste management efforts, such as incinerators, in recent years.

CNAS' and WWP's goal was to create heat maps to see fluctuations in risks to short- and long-term health over time by location, hoping to give service members a way to see whether their deployment exposures could mean a higher risk to their health.

"Given the serious concern about possible long-term health risks for service members and veterans associated with their exposure to burn pits and other environmental toxins, it is critical for these individuals, their family members and medical providers, policymakers, and legislators to be informed about the risks directly and transparently," CNAS said in its report released Wednesday.

Derek Fronabarger, government affairs director for WWP, said the VSO hopes the maps will help service members evaluate their health risks with their doctors. WWP's goal in commissioning the study was to determine if the POEMS records were suitable for the VA to use when deciding claims for toxic exposure illnesses. Fronabarger and WWP said those records are too unreliable to use to deny veterans' claims.

VA staff who will have access to the Defense Department's new Individual Longitudinal Exposure Record (ILER) system, which pulls some of its data from the same reports as the heat maps, already are being trained that claims should not be denied because of a lack of data.

Williams said CNAS did not rank the locations based on areas with most risk since the data was so unreliable. She said CNAS hopes the maps, which revealed "weaknesses in the data," will be "a call to action" for the Defense Department to improve its data collection and transparency.

And though the data is incomplete, Fronabarger said he still hopes the maps are helpful for veterans in the VA claims process.

"Sometimes knowing what you don't know is still a step forward," he said.

View the heat maps and CNAS report here. The maps are recommended for viewing on a computer, not a mobile device.

The CNAS report is part of a partnership with WWP and part of the VSO's $650,000 investment in toxic exposure research. WWP called toxic exposure a "cross-generational problem" and its annual survey showed that more than 70 percent of its members say they have been exposed to hazardous chemicals or substances. Of those, 9 percent are getting VA treatment for their exposures.

A new bill introduced in the Senate this month would establish that some veterans were exposed to airborne toxins from burn pits during their service and could create a path to care at the VA.