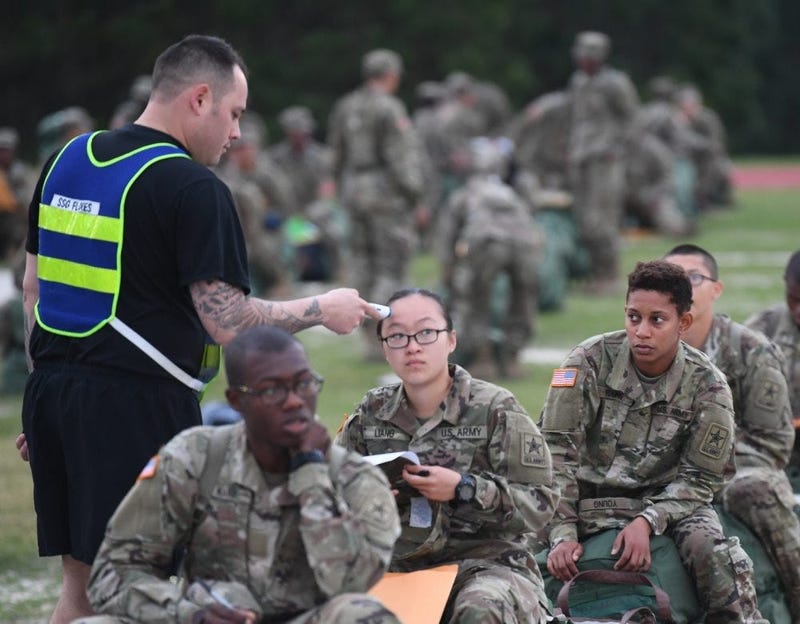 While some prevention measures have been implemented, the Marine Corps, Army, Navy, and Air Force have all deemed their entry-level basic training as mission essential and have continued shipping classes of recruits across the country into close quarters training environments. And — after multiple rounds of health screenings — COVID-19 is beginning to spread among recruits

The Air Force relocated some of its basic training classes to Lackland Air Force Base in Texas to allow for more social distancing in the larger facilities. The branch reported four confirmed COVID-19 cases among its recruits this week despite the location change.

The Navy locked down its training center in Great Lakes, Illinois for 90 days, not allowing the base's staff and residents to leave. It also implemented a 14-day restriction of movement policy for all new recruits arriving at the station. Despite these efforts, the Navy Recruit Training Command reported its first positive COVID-19 case this week as well.

And Marine Corps Recruit Depot Parris Island in South Carolina closed its doors to new recruits after the installation reported 20 cases of COVID-19 — two of which were among recruits who had passed all health screenings according to spokesman Capt. Bryan McDonnell.

Health screenings include temperature checks and questionnaires. Recruits go through these screenings multiple times throughout the process of arriving at basic training facilities. But the Marine Corps COVID-19 cases are proof that these screenings are not necessarily effective. The recruits who would eventually test positive for COVID-19 had regular temperature readings and questionnaires at their military entrance processing stations and upon arrival at the depot.

The Marine Corps' second recruit training depot in San Diego and all of the Army's basic training operations remain open with no additional measures beyond health screenings.

U.S. Army Training and Doctrine Command shared videos and photos of the "extreme precautions" being taken to maintain social distancing within the training programs.

As of Wednesday morning, the Department of Defense had 1,405 confirmed cases of COVID-19 across the force including five deaths.