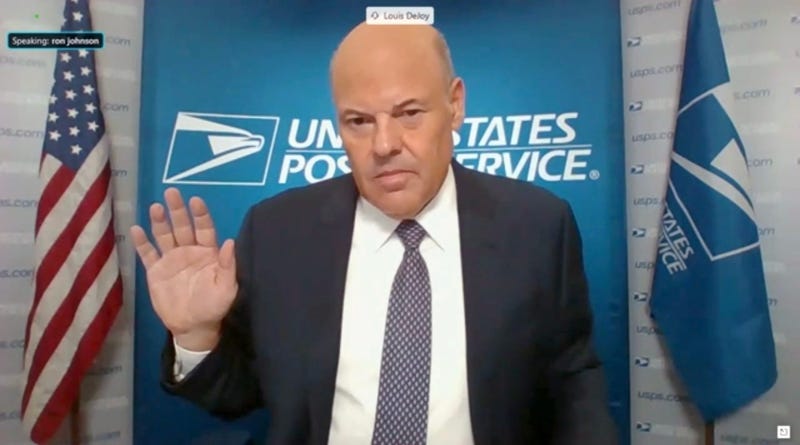 Sen. Rob Portman, R-Ohio, told DeJoy about "heartbreaking stories" he's heard from those affected by USPS delays, including a veteran with chronic obstructive pulmonary disease (COPD), waiting to receive his inhaler in the mail.

“We are working here feverishly to get the system running, add stability, and also to hire more workers to handle the delivery process," Dejoy said. "We all feel bad about the dip in our service level. We serve 161 million people. We still deliver at 99.5% of the time ... Everybody's working feverishly to get that right ... We're considering dramatic changes to improve the service to the American people."

While DeJoy acknowledged some service interruptions, he denied any major failures or intentional delays.

Three days before his appearance in the Senate, DeJoy announced he planned to halt changes that some argued led to the reported mail delays, until after the November election.

DeJoy, a top donor to President Donald Trump, took over USPS on June 15. DeJoy issued a memo during his first month leading USPS which mentioned the Post Office's continued financial struggles and announced new policies, including that the USPS would now accept delayed mail to save costs.

It was those changes that lawmakers wanted to know more about on Friday, during DeJoy's testimony before the Senate Homeland Security and Government Affairs Committee.

Sen. Jacky Rosen, D-Nevada, was one of few lawmakers on the committee to directly address delays some veterans have experienced for "lifesaving medications" during her questioning. Most senators' questioning focused on how election mail may be affected.

Rosen asked DeJoy if he did any "specific analysis of how veterans would be impacted" by the changes he made. DeJoy repeatedly couldn't, or wouldn't address the question. He said, under his changes, that "theoretically, everyone should have gotten their mail faster." Eventually, DeJoy refused to provide specific analysis Rosen requested but said he would provide truck schedules.

Rosen said that was not the case, and asked DeJoy if he would commit to being sure that people receive their deliveries on time, including veterans' mail-order prescriptions.

"I'm working towards on-time delivery," he said, promising that the postal service "will deliver on this election" and that delivery of other critical mail, such as prescriptions, would not be harmed in coming months.

Sen. Maggie Hassan, D-New Hampshire, read from a letter from a veteran who said "there has been a 'noticeable slowdown in mail delivery delays that have caused me to ration my medication.' He started cutting back on dosage to have pills or skipping alternate days  to make them last."

Veterans like Amber Torija, a retired Marine, told Connecting Vets similar stories. Torija said that most of her 12 different prescriptions typically arrive within a day or so, but recently took nearly a week. She's still waiting on two of her prescriptions.

Ranking member Gary Peters, D-Mich., said he heard from a constituent who was hospitalized because of delayed mail-order prescriptions.

"Seeing the slow down I started reducing my meds I was taking so I wouldn’t completely run out because I looked and some had warnings not to stop taking suddenly," she said. "I was actually just released from the hospital and am supposed to do breathing treatment every four hours but instead I push it to just once or twice a day unless I needed it in an emergency."

Not all senators at the hearing blamed DeJoy's decisions for mail delays. Some, like Chairman Ron Johnson, R-Wisconsin, Sen. Rand Paul, R-Texas, and Sen. Mike Enzi, R-Wyoming, spent much of their time praising DeJoy and apologizing to him for what they considered partisan attacks by their colleagues. Some senators seemed to argue that accounts of delays were not all true.

Those senators took DeJoy at his word that much of the delays were caused by lack of USPS staffing and other issues directly caused by the coronavirus pandemic, and some said they supported major cost-saving measures at the financially troubled USPS, including potentially limiting delivery days, raising prices or limiting delivery service to more rural or remote areas of the country.

DeJoy is expected to testify before House lawmakers on the same issues on Monday.

USPS delays could significantly affect veterans since the vast majority of Department of Veterans Affairs prescriptions are fulfilled by mail from a group of seven massive, automated hub pharmacies across the country, the Consolidated Mail Outpatient Pharmacy (CMOP) system. That centralized pharmacy system processes about 80% to 90% of all VA outpatient prescriptions and almost all (90%) of those are shipped through USPS. The other prescriptions are typically filled at local VA medical facilities.

USPS is also one of the country's largest veteran employers, with nearly 100,000 veterans on staff (about 15% of the total USPS workforce). About 60% of the veterans working at USPS have a disability rating, the agency estimates.

VA prescriptions mailed by the U.S. Postal Service in the past year have seen delays of nearly 25%, the federal agency recently told Disabled American Veterans, and VA told Congress previously that to help mitigate delays, the department was forced to switch to alternative delivery services in some areas, such as UPS and FedEx, among other measures.

When asked if VA is tracking any delays in medication being sent to veterans, VA spokesman Curt Cashour told Connecting Vets, "No."

But some veterans said they were contacted by VA about their prescriptions only after sharing information about the delays they experienced with Connecting Vets' and appearing by name in subsequent news stories.

Some veterans are still waiting to receive their medications, like Melissa Ned, a U.S. Navy vet, who's waited weeks for her two leukemia medications to arrive. She can't just go to her nearest Department of Veterans Affairs hospital to get them -- it's two hours away and its pharmacy has been mostly closed during the pandemic.

"I gave up calling the VA pharmacy since COVID-19," she said. "Nobody answered and I automatically got disconnected."

Marine veteran Karen Brown said her prescriptions recently arrived but were more than a week late, and when she called her doctor and VA pharmacy to check on them, she said she was made to feel like a burden.

"All the time you're feeling like a bother," she said. "It's just the way it is. I'm grateful for what I have, but it's always a bother."