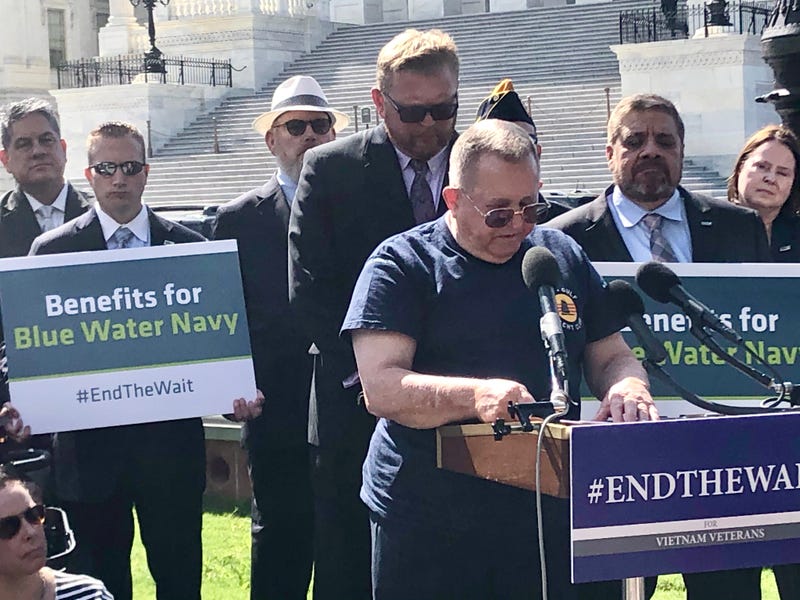 The Federal Circuit Court of Appeals has ruled that it will not lift the stay on Blue Water Navy Vietnam veterans' claims imposed by Department of Veterans Affairs Secretary Robert Wilkie earlier this year.

The court heard oral arguments last month in a lawsuit filed by veterans nonprofit group Military Veterans Advocacy Inc. (MVA). The lawsuit asked that the court lift the VA-imposed delay on processing Blue Water Navy Vietnam veterans' Agent Orange disability claims. The delay affects more than 400,000 veterans or surviving family members who could be eligible for benefits, according to VA.

"Although the court did not lift the stay and found that Congress intended for the stay to apply, we still consider this a win," Retired Navy Commander John Wells, director of litigation and chairman of the board of MVA, told Connecting Vets. "They have stated in no uncertain terms the stay cannot go beyond Jan. 1, 2020."

After decades of trying to win disability benefits from the VA, thousands of Blue Water veterans exposed to toxic herbicide Agent Orange are still waiting for a chance to receive disability benefits -- even after a landmark court decision and a law awarding those benefits passed Congress and was signed by President Donald Trump.

The lawsuit attempted to overturn a stay ordered by Wilkie and first reported by Connecting Vets in July. The stay was allowed under the Blue Water Navy Vietnam Veterans Act passed by Congress and the president, Wilkie says, and it stalled all claims processing until Jan. 1, 2020.

The lawsuit also attempted to clarify the Procopio v. Wilkie Federal Circuit Court decision, which reversed a 1997 VA decision to deny that Blue Water veterans were exposed to Agent Orange while serving offshore of Vietnam. The Procopio decision earlier this year meant that the VA should presume veterans who served in the waters off the coast were exposed to Agent Orange at some point during their service, and as a result were eligible for related VA benefits.

So far, both routes to benefits for Blue Water veterans have been shut down by the stay and look to remains so until the first of the year at the earliest.

"This is why the Blue Water Navy Vietnam Veterans Association and Military-Veterans Advocacy withdrew support from the Blue Water Navy Act," Wells told Connecting Vets, adding that MVA tried to reach out to major veteran service organizations and Congress about their concerns before the bill passed, but the legislation moved ahead anyway.

Wells said the VA has delayed all claims for Blue Water veterans -- including those that should have moved forward since the Procopio decision, and veterans are dying while they wait. He said at least 12 have died since Wilkie issued the stay.

"It's a shame," he said. "This shouldn't have ever been allowed to happen."

Claims can be submitted now

While the stay is currently expected to continue until Jan. 1, claims for benefits can be submitted now.

VA has said Blue Water veterans and their families are "encouraged" to submit their claims for conditions related to Agent Orange. Veterans 85 and older, or "with life-threatening illnesses" will have "priority in claims processing," VA said. So, while VA will not begin processing claims until 2020, they can still be processed and prepared before that date.

About 77,000 Blue Water veterans have previously submitted claims and been denied, VA leaders said. They must file a new claim. Eligible survivors of deceased Blue Water Navy veterans can also file claims for benefits based on their veterans' service.