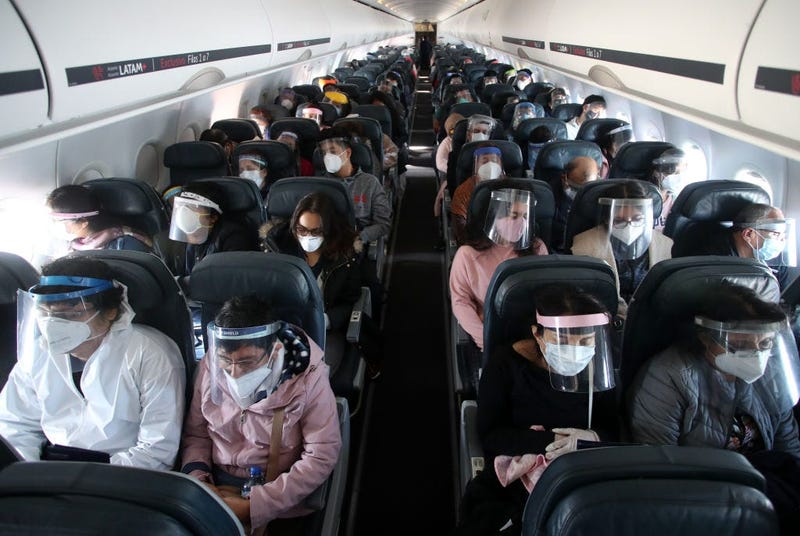 There's a low risk for travelers on airplanes to contract COVID-19 and other airborne viruses, an early military study released Thursday suggests -- regardless of where passengers sit.

"Within the scope of the test, the analysis showed overall low exposure risk on these aircraft from airborne pathogens like (the coronavirus)," Vice Adm. Dee Mewbourne, the deputy commander of TRANSCOM said during a media call Thursday. "The favorable results are attributable to a combination of ... high air exchange rates, coupled with high-efficiency particulate air (HEPA) filtration recirculation systems and the downward airflow ventilation design which results in rapid dilution and purging of the disseminated aerosol particles."

The six-month study, with hundreds of tests, found that as much as 99.99% of particles released into the air by a person infected with the virus who was wearing a mask were removed from the cabin's air within about six minutes. In a typical home, it takes about 90 minutes for similar particles to clear, according to the study report.

The test was conducted onboard United aircraft -- Boeing 767 and 777 jets -- and found that the onboard air recirculation, downward-directed air ventilation and HEPA filtration systems significantly decrease the likelihood of infection. About 99% of aerosolized particles were reduced by the time they reached the nearest passenger's seat and were all but gone a few seats away, according to Mewbourne.

Only about .003% of infected air particles were found to enter the breathing zone of other seated passengers, according to the study, even if each seat on the plane is full.

Researchers used a mannequin they called "Ruth" in their experiments. Ruth was equipped with an aerosol generator used to simulate a breathing and coughing passenger. Researchers moved Ruth throughout the plane to measure particles released, both wearing a mask and without a face covering. Sensors on seats set up across multiple rows and in the galleys and on the jetbridge represented other passengers who could be exposed to Ruth. 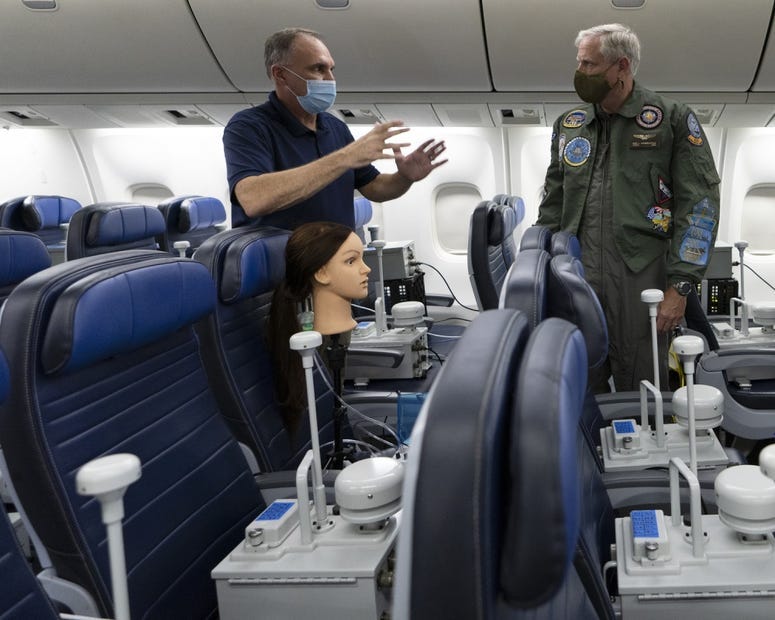 "We found that on cough simulations (using a mask), there was a very large reduction in aerosol that would come from the mannequin -- greater than 95% in most cases," said David Scott, one of the researchers and study authors, of the biological research arm of tech company S3I. "It greatly showed the benefit of wearing a mask during a flight."

More time spent in the aircraft, however, did correlate to higher infection risk, but on the aircraft tested, even passengers on longer flights would be unlikely to be exposed to an "infectious dose" of the virus. In the Boeings tested, the study showed that passengers would have to spend at least 54 hours next to an infected passenger in economy seats and more than 100 hours in other cabins to be exposed to enough of a "viral load" to become infected themselves.

Researchers conducted about 300 tests over 38 hours of flight time and 45 hours of ground testing. Each test released about 180 million particles -- the equivalent of about 1,000 coughs. The $1 million study was conducted over about eight days in August at Dulles International Airport in Virginia. United provided flight time for the study at no cost.

The results of the tests were consistent across locations on the planes.

"All areas on both aircraft proved to be extremely effective in dispersing and filtering out the aerosol particles," said Navy Lt. Cmdr. Joseph Pope, TRANSCOM Operations liaison for the study. "So specifically, can I tell you to sit in seat X, Y, Z? No -- they all performed very well."

Wearing a mask is a key element of the low infection risk, according to the tests, Pope said, since the test only analyzed aerosolized particles and not "ballistic particles" which are heavier particles typically released through coughs, sneezes or heavy breathing.

"The mask is very important in that the larger droplets that travel ballistically through the air will be caught by your mask," he said. "If you don't have the mask on, then you cannot reduce those numbers of ballistic particles."

There are limits to the study, though, researchers cautioned. They did not simulate passengers moving around the aircraft cabins, or facing each other to speak.

"While we're very encouraged by the results, that's part of the reason why we're making the results public, and sharing them with the scientific community so that that follow-on research can be done," Pope said. "Technically speaking, the results are good for these two aircraft in the conditions tested."

The study also has not yet been peer-reviewed or published in a scientific journal, and its findings will need to be replicated by other researchers to back up its findings. The study results could prompt policy changes for travel, Pope said.