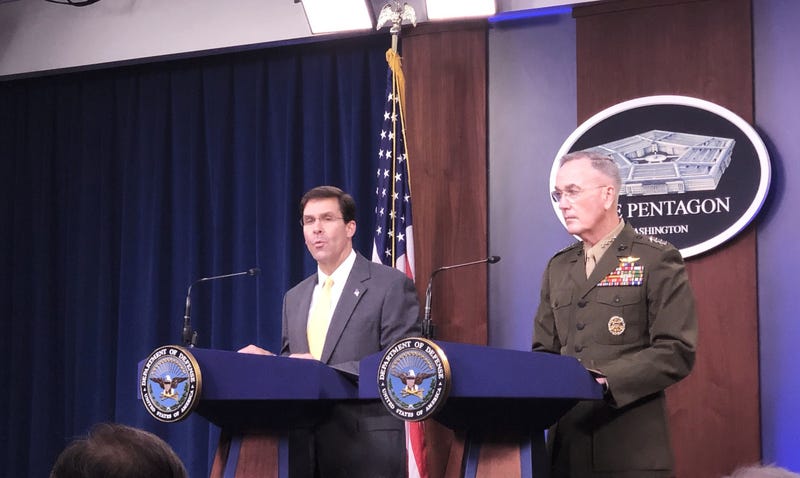 Secretary of Defense Mark Esper and Joint Chiefs of Staff Chairman Marine Gen. Joseph Dunford hosted a rare on-camera press briefing in the Pentagon Briefing Room on Wednesday — Esper, who was confirmed as Secretary of Defense on July 23, says it will be the first of many.

"The United States military has a proud history and a great story to tell. It is my commitment to the military people who would trust us with their sons and daughters to keep them informed of the work that our soldiers, sailors, airmen, Marines, and Department of Defense civilians do every day to keep our nation safe," Esper said. "While we have many avenues to engage with the media in today's world, moving forward I intend to do these briefings to maintain an open dialogue about the department's activities."

More regular press briefings would be a significant change — an entire year passed from May 2018 and May 2019 with no on-camera Department of Defense briefings.

Esper said he wasn't sure he had ever seen the Briefing Room so full.

Most of the topics discussed during the briefing concerned national security and active-duty troops — tensions between the United States and Middle Eastern countries, the Korean missile tests, and PFAS contamination. But Esper also addressed a question about burn pits and their impact on veterans.

"This goes back to my days in the service. After my tour in the Gulf War, we had Gulf War syndrome...Still, many folks suffer from it," Esper said. "The VA has the lead on this — I haven't talked to VA Secretary Wilkie in a while, but he and I go back many years. He is completely committed to our service members and the veterans and this is one of the areas where I want to improve and make sure we're doing everything we can to assist soldiers, sailors, airmen, and Marines as they transition out of the service into the VA system."