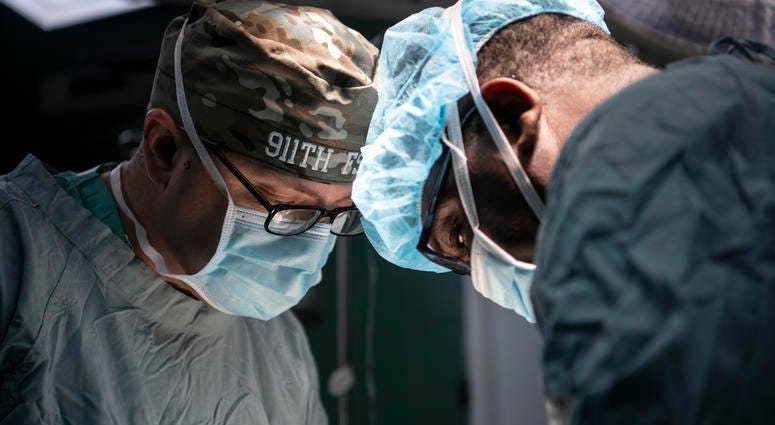 In February, the Defense Department, in congruence with Congress's oversight, announced a plan to eliminate nearly 18,000 medical corps personnel. If the plan is carried out, physicians, dentists, nurses, technicians, medics, and medical support roles will all be eliminated and replaced with combat-support positions and warfighters in order to increase force lethality.

The impact these cuts will have on the military community — active, families, and veterans — is currently unclear.

The proposed cuts are supposed to start as soon as October 2020 — but concrete plans for how these personnel cuts are to be made have yet to be seen and many are concerned.

“We wanted the details,” said retired Navy Captain Kathryn Beasley, director of government relations for health affairs at the Military Officers Association of America. “Of course, no details were given at the time other than people have said we’re overmanned in pediatrics and obstetrics. They said we’re looking at the specialties that do not support the readiness function. But I think we’re going to see cuts across the board at the military treatment facilities — pharmacy, lab, radiology.

Senior military officials claimed the current force is larger than needed. The areas that are overstaffed don't directly support combat deployments — such as pediatrics. And, since there are more doctors than there are patients that need medical services, doctors aren't using their skills enough to keep them sharp.

Some positions will be permanently cut — some will be converted to contractor positions. Maj. Gen. Lee Payne, director of combat support for the Defense Health Agency, has communicated that cuts will be made on a location-by-location basis.

On the patient side, however, military personnel and families — including Beasley — have not had experiences that indicate staff overloading. A comprehensive Military Health System Review conducted by the Pentagon found that the standard wait time for routine appointments is roughly a week — but not all facilities meet the standard. Families stationed near the lowest-performing installations waited up to four weeks. Theoretically, the upcoming personnel cuts will shift personnel to places of need and standardize wait times and services.

“Within those 18,000 roles, we have learned, a certain portion is unincumbered meaning there aren’t actually people in those billets now. So to give those up we think is okay. But the question is, why aren’t those billets filled?” Beasley said. “Can they not hire people into those?”

“They’ve said they’re doing a market analysis around the bases, but we’re hoping it’s a little more in-depth than just ‘Oh, there’s x amount of providers for the specialty outside the gate so we can take them away,’” Beasley continued. “They need to dig a lot deeper in that analysis there. What is the propensity of those providers to take new Tricare patients?”

This analysis was supposed to be reported to Congress this summer — but summer is starting to wind down and no report has been submitted.

“The services briefed us last week and, to be fair to the defense health program and the services, it’s a pretty tall order to ask them to try to get something of this depth in such a short period of time,” Beasley said. “We’re skeptical a little bit that this can be accomplished. They can probably slap a report up there, but will it really have the depth that we’re going to be looking for?”

Veteran Service Organizations know little more than MOAA does. A spokesperson from AMVETS said that DHA believes there won’t be any lapse in care, services will be streamlined, and medical personnel will be moved to where they’re truly needed. However, DHA was unable to provide any specifics on how exactly this will be done.

These aren’t the only organizations keeping a concerned eye on these personnel cuts. Former surgeons general of the Army, Navy, and Air Force wrote a letter to Congress to "strongly assert the need for Congress to table these cuts until a thorough study of the potential consequences of these reductions are evaluated."

"The risks of relying on what is, at best, a superficial analysis of promised cost savings derived from large-scale reductions will lead to reduced readiness by not having enough physicians, nurses and medics to care for those in war zones," the letter reads. "If even one of these "high-risk, high-regret" consequences unfolds, the percent of those dying from wounds will increase, the all-volunteer force will suffer, and we may be forced to again draft medical personnel -- including physicians."

Additionally, some members of Congress have stepped in to ensure this process does not move forward without proper analysis.

The House Appropriations Committee passed a defense spending bill that would withhold $250 million from the Defense Health Agency until an in-depth report on personnel cut impacts was produced. The $250 million was meant to allow the DHA to hire civilian and contract workers.

For the time being, it seems any major implementation has been delayed until the Defense Health Agency and service branches are able to report answers to the concerns posed by Congress, military officials, and family members.