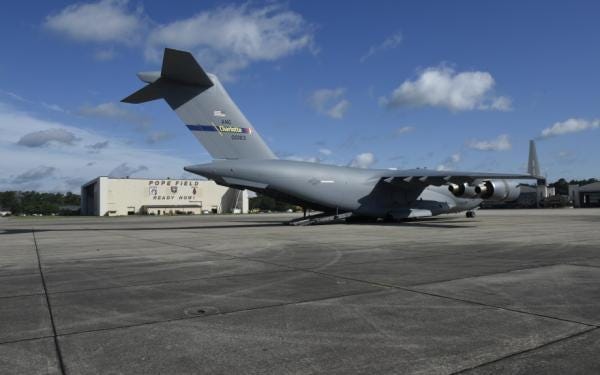 Demont Moore is a disabled veteran who said he was happy to hear the news last year that he could now fly for free through Space-A "until I found out my family couldn't travel with me," he told Connecting Vets.

Lonnie H. Smith, a disabled Vietnam veteran, said he appreciated the benefit of flying free through Space-A, but "it seems to be incomplete if my spouse is unable to travel with me."

At issue is a piece of legislation tucked away in the annual defense spending bill last year that allowed 100-percent disabled veterans to fly Space-Available aboard military aircraft for free. Previously, only active-duty and military retirees and their dependents were eligible to compete for seats.

When the measure to expand the flights to disabled veterans made it into the defense spending bill last year, veterans and their families celebrated.

Those celebrations turned sour when they learned the Department of Defense had interpreted the Congressional legislation to exclude family members, who often serve as caregivers to the 100-percent disabled veterans. Nearly a year later, there's still no fix.

"I do not see where there would be any extra cost in allowing family members to take an otherwise empty seat," Smith told Connecting Vets. "In a preponderance of cases, these dependents have supported these vets -- placed their careers on hold, endured constant relocations and have been required to serve as single parents during the service member's deployments."

"In my limited understanding of this new, stupid issue created by the DoD, it could simply be changed by the stroke of a pen by President Trump," disabled Navy veteran Ronny Mauldin told Connecting Vets, "After all, he is their boss."

Mauldin lives in the Philipines near the former Naval base where he served and has started a Facebook group to help service-disabled veterans living abroad to try to tackle the issue of disabled veterans, their caregivers and Space-A.

Rep. Gus Bilirakis, R-Fla., originally introduced the amendment to the defense spending bill last year. In April, Bilirakis spokeswoman Summer Robertson told Connecting Vets "the Congressman's attempts to resolve this matter in an informal matter have been unsuccessful" and added that Bilirakis planned to send a bipartisan letter to "officially request the DoD to amend its procedures."

But that change hasn't come in the months since.

Bilirakis tried to get a fix included in this year's defense spending bill, but during consideration in the Rules Committee, the amendment was ruled out of order and didn't make it into the final version that passed the House earlier this month.

"Congressman Bilirakis was grateful to partner with Rep. Blunt Rochester ... to try to address this problem as part of NDAA and was disappointed it was ruled out of order and couldn't be debated on the floor," Roberts told Connecting Vets this week. "However, we do plan on continuing to work together to address this with the Pentagon. We've requested that they comply with legislative intent, and are working to explore all avenues to do right by our veterans and their families on this matter."

But that restriction still is not found on AMC's website, nearly a year after an AMC spokesman told Connecting Vets it was working to update the site to help veterans understand eligibility changes.

Veterans and family members who reached out to Connecting Vets, along with Bilirakis, said the intent of the legislation isn't being followed. The defense bill amendment to allow for free Space-A travel for those veterans was based on a bill by Bilirakis, which would have extended the same eligibility retirees have to 100-percent disabled vets and their dependents.

The version of Bilirakis' bill that made it into the defense bill last year includes language not found in the original bill that DoD has interpreted to restrict dependents and limit all flights for disabled veterans to stateside only. Roberts told Connecting Vets the Senate amended the congressman's original legislation, "which gave the DoD flexibility in its interpretation."

AMC does not know how many 100-percent disabled veterans have used, or attempted to use, the new benefit since the command does not track those veterans, according to a Connecting Vets Freedom of Information Act request.

“DAV supports any legislation that would extend space-available air travel aboard military aircraft to all 100 percent service-connected disabled veterans in the same manner as is currently provided to retired military personnel," Ilem said in a statement to Connecting Vets. "We will continue to advocate for this change on behalf of America’s disabled heroes until such legislation is enacted.”

Meanwhile, 100-percent disabled vets and their families will wait on a solution so they can use the benefit.

"This gave all (disabled veterans) a false sense of hope to be able to start taking much needed or wanted vacations," Moore said, adding that he's hopeful steps are being taken "to fix this soon."