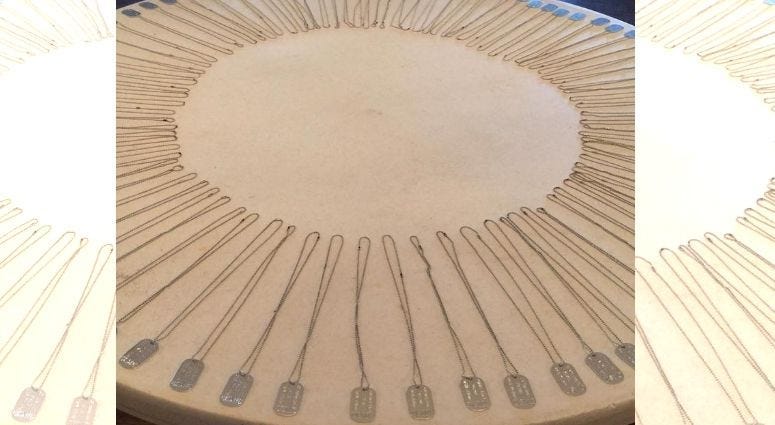 As we head into Memorial Day, I awoke at 3 a.m., as I often do on sacred days, to think about the day ahead. In collaboration with one of my favorite veteran journalists, Phil Briggs, I interviewed for an article Phil felt moved to write about how Memorial Day can be a painful trigger for veterans.

As I explained, for many veterans, Memorial Day brings a sharp increase not only of trauma memories, but also feelings of acute grief and loss, and in some cases, a heavy burden of survivor guilt.

The article was published on Saturday and has since been re-tweeted over 2,000 times, data which tells me that this is something we need to focus on, right now, as a grateful nation full of individuals who want to support our military service members and veterans.

For many veterans, Memorial Day brings a sharp increase not only of trauma memories, but also feelings of acute grief and loss, and in some cases, a heavy burden of survivor guilt. If you need support this weekend, TAPS is here for you - 800-959-8277.https://t.co/GT2gaDFwSE

We are often instructed to “thank veterans for their service.” While this is well-intentioned, this statement is neither appropriate for Memorial Day, nor is it always well received by veterans. I appeared on a television program called "Veterans Voices" last week on the topic of pride and shame in relation to military service. A prominent topic during the program was how “thank you for your service” is often felt by many veterans to be polite, but essentially meaningless social nicety.

About a year ago today, I was invited to join a group of about 30 Marines who served with 2/7 and 2/3 Marines for a private weekend to honor their fallen. Together with them, we honored the lives of 89 of their fallen brothers, lost to all causes of death. The picture shown here displays the dog tags of these 89 irreplaceable brothers, warriors who gave their lives for the people they love and values they hold sacred. The disproportionate grief burden carried by our military service members and veterans has never been more clear to me than on that weekend of honorable mourning. I am frequently reminded of the weight of this grief burden as Marines in my life often text me to relay that they will be serving – again – as a pallbearer – or attending the funeral of a brother or sister in arms, beloved to them as much as a blood-related family member.

As a grateful nation, it is critical that we proactively support the veterans in our lives. Instead of saying “thank you for your service” this Memorial Day, we can say something like, 'I will never forget the service and sacrifice of our fallen' or 'I stand with you in grieving the loss of those who made the ultimate sacrifice.'"

It's not just what we say, it’s what we do. In this vein of understanding, I’d like to suggest a new tradition for Memorial Day, which is this:

Host a barbecue. Make a delicious meal that brings many of your favorite people into your home. Among the circle of those, you bring together, including some of the service members and veterans in your life. As a part of your gathering, assemble before the meal, say a prayer for our nation if this is consistent with your faith, and as the host, let everyone know that we will never forget the service and sacrifice of those who paid the ultimate price for freedom. Then give those attending military service members and veterans the opportunity to say the names of their fallen brothers and sisters in arms – lost to all causes of death – whether they were killed in action, killed during training accidents, killed due to health conditions that ended their lives before their natural course, or whether they are casualties of the invisible wounds of war, beloved people who have died by suicide. Invite the veterans in your circle to share not only the names of their fallen but to tell a story about the fallen among those gathered at your home.  A story of any length – whatever feels right to the person sharing the story. Be aware that in listening to this story, even if the story is hilarious and irreverent, you are still walking on sacred ground.

More than anything you can say though, taking action to stand with veterans on Memorial Day, honoring our nation’s fallen together actively helps reintegrate our veterans back into society.

Let’s make this a new tradition for Memorial Day – let’s stand with those who serve our great nation – let’s bring them home with the force of our love and acceptance.

Dr. Shauna Springer is a graduate of Harvard University and is one of the world's leading experts on PTSD, Trauma, and Moral Injury among veterans. She co-hosts a weekly podcast on these topics in collaboration with MilitaryTimes. Her work has been featured on CNN, VICE, Dr. Oz, NPR, NBC, CBS Radio, Forbes, The Philadelphia Tribune, Washington Post, and Military Times. She is a regular contributor to Psychology Today.
Her latest book is  "Warrior: How to Support Those Who Protect Us"
In Warrior, Shauna offers a glimpse of how our bravest citizens may struggle and draws from the experiences of our warfighters to help us understand true courage and the bonds of love that keep all of us in the fight.