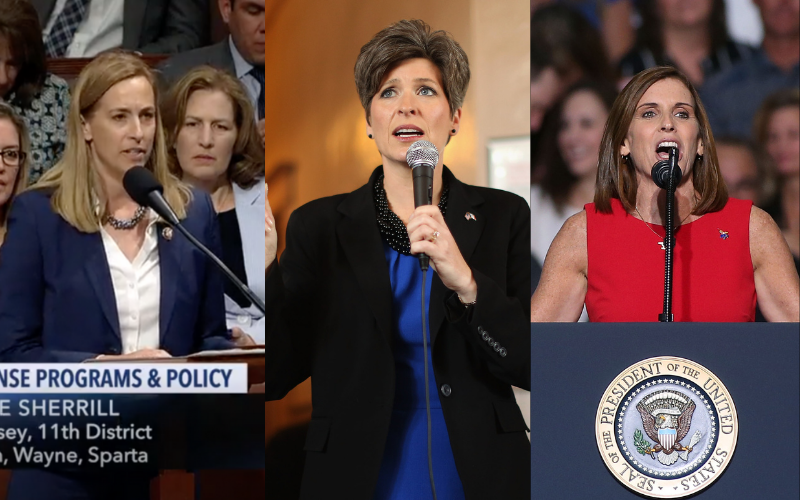 After weeks of awaiting 2020 election results, all those featuring women veteran candidates have been decided.

All but one challenger lost their races, but four incumbents secured re-election and Arizona saw one major upset.

In all, 28 women veterans ran for Congressional seats on Election Day-- a significant increase over prior years. The Associated Press has now called each of those races, according to unofficial election results. Vote counts must still be certified by state elections officials after all votes are tallied.

Among those, the Senate races remained perhaps the most significant, with Sen. Joni Ernst, R-Iowa, and Rep. Mikie Sherrill, D-New Jersey, emerging victorious.

Ernst, R-Iowa, a former Army Reserve and Iowa National Guard lieutenant colonel with 23 years of service is running against Democrat Theresa Greenfield, who has not served in the military. Ernst is the first woman to represent her state in Congress and the first woman combat veteran elected to the Senate in United States history.

Ernst faced a tight race against challenger Theresa Greenfield, but eventually won 51.8% of the vote to Greenfield's 45.2%, according to unofficial results, and led Greenfield by nearly 110,000 votes as of the morning following Election Day.

The AP called the New Jersey race for Sherrill on Election Night and with about 56% reporting as of Nov. 4, Sherill led challenger Rosemary Becchi 58.9% to 41.1%.

Sen. Martha McSally, R-Arizona, lost her bid for re-election to a fellow veteran. McSally, a former Air Force colonel with 22 years of service, was the first female fighter pilot to fly in combat. She was appointed to her seat after Jon Kyl resigned after being appointed successor for the late Sen. John McCain and so was never officially elected to the Senate.

McSally was defeated by Mark Kelly, a former Navy captain and pilot and NASA astronaut. As of Nov. 4, with about 83% reporting, Kelly held about 52.6% of the vote compared to McSally's 47.4%, leading by more than 140,000 votes, according to unofficial results.

Seven women veterans serve in the 2019-20 session of Congress -- more than ever before. But that number will likely shrink. Rep. Tulsi Gabbard, D-Hawaii, is not running for re-election, Sen. Tammy Duckworth, D-Illinois, is not up for re-election yet, and McSally's loss means that while Congress will still keep a veteran in the Arizona seat, it won't be a woman.

Five of those seven seats are likely to stay with women veterans so far as votes continue to be counted: Ernst, Sherrill and Duckworth, along with Reps. Elaine Luria, D-Virginia, and Chrissy Houlahan, D-Pennsylvania, who secured wins on Nov. 4, according to unofficial results. Now, all that remains to be seen is if some women veteran challengers can upset their incumbents.

One of the most notable challenger losses Tuesday was for Amy McGrath, a former Marine fighter pilot with 20 years of service and the first woman to fly combat missions for the Corps. McGrath was hoping to unseat Senate Majority Leader Mitch McConnell, R-Kentucky, who has served in the Senate for 36 years and has significant power and influence in Congress.

McConnell received a draft deferment for law school and later enlisted in the Army Reserve in 1967, a group typically kept out of combat during Vietnam, but was deemed medically unfit for service and discharged five weeks later.

McConnell won a handy victory over McGrath, according to unofficial results as of Nov. 4. With 97% reporting, McConnell held 58.2% of the vote and McGrath held 37.8%, putting McConnell ahead by more than 429,000 votes.

The fourth woman veteran running for Senate office was M.J. Hegar, a former Army major, also a pilot, who challenged John Cornyn, R-Texas, a previous Senate Majority whip who has served in the Senate for 18 years. Cornyn has no military service, but his father was an Air Force colonel.

In the House, several races with women veteran candidates remained outstanding as of Wednesday morning, though incumbents Elaine Luria and Chrissy Houlahan secured their wins.

Luria faced a challenge from Republican candidate Scott Taylor. a former Navy SEAL. The two vets previously faced off in an election in 2018. As of early Nov. 4, Luria held 51% of the vote to Taylor's 46.5% with 99% reporting.

Houlahan also secured her re-election victory. Houlahan, an Air Force veteran, defeated challenger John Emmons. With 81% reporting, Houlahan had 53.2% of the vote to Emmons' 46.8%, according to unofficial results.

Republican challenger Mariannette Miller-Meeks, an Army veteran, won a narrow victory by just six votes in the Iowa 2nd race, certified by state election officials this week. Her election is still could be contested because of its narrow margin, well within range for a potential recount. If she secures her win and her seat, Miller-Meeks will become the only new woman veteran headed for Capitol Hill in January.

Many of the women veteran challengers who lost their bids for election ran against well-established incumbents -- some of whom are veterans themselves -- who were often better funded, or favored to win.