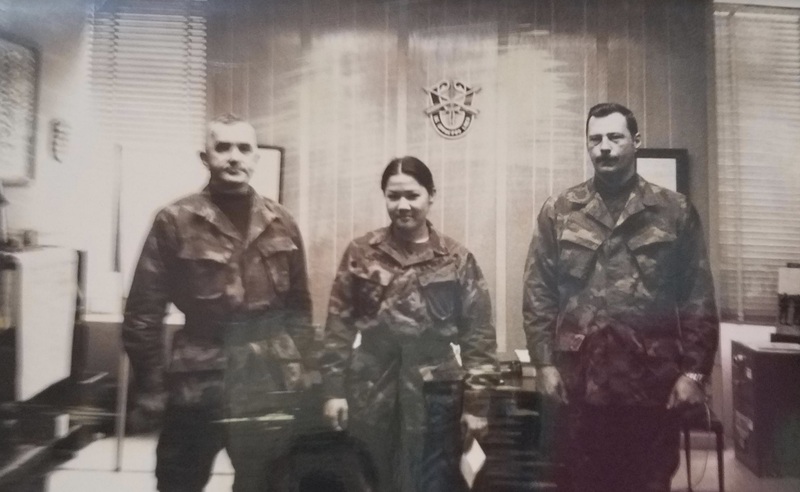 Women’s roles in the military have been a topic of discussion in recent years, especially in combat, but very few are aware there was a female member of a Special Forces counter-terrorism team decades ago. She trained alongside seasoned Green Berets, veterans of Vietnam, and gained their respect. Her name is Katie and this is her story.

In 1977 the United States faced an unconventional threat emanating from international terrorism. The third world was aflame with communist insurgency and terrorists were hijacking airplanes in an effort to hold American foreign policy hostage with their political demands. It became glaringly obvious that America had no response and therefore a capabilities gap after the Israeli raid on Entebbe, Uganda in 1976. Had Americans been taken hostage in such a manner, there was nothing the U.S. government could have done about it at that time.

Col. Charlie Beckwith had long lobbied the Army for the creation of a dedicated unit that could execute highly technical special operations missions. After Entebbe, he finally got the green light but he argued with the Pentagon that he needed two years to properly select and train his unit, which would be called 1st Special Forces Operational Detachment-Delta. In the meantime, the military needed a stopgap in case a terrorist incident happened while Beckwith was still preparing his unit. This task fell to Col. Robert Mountel (often known by his initials: RAM), the commander of 5th Special Forces Group. Blue Light as it was known, was created under a cloak of secrecy at Mott Lake on Ft. Bragg, North Carolina. The unit was staffed by Green Berets nearly all of whom had seen action in the Vietnam War.

For an unconventional war fought with unconventional tactics, unique personalities were needed. Blue Light was composed of hard men, bloodied in combat in the jungles of Vietnam. They were on the Son Tay raid, conducted cross border missions into Laos and Cambodia with Studies and Observations Group, served on Mike Force, or worked in classified programs with names like Omega, Sigma, and Delta.

Perhaps Blue Light's officers were the only men in the unit who didn't have combat experience, but all were men and all wore Green Berets. However, that was to change when Col. Mountel called a Blue Light officer named Thomas "Taffy" Carlin into his office one day and informed him that he was going to assign a female soldier from 5th Group's intelligence shop to their unit.

"I wonder how the guys will adjust to this?" Taffy asked.

"That's what you're there for," the Colonel replied.

The young woman was a specialist who served as an intelligence analyst at 5th Group named Katie McBrayer. She stood at 5'3" with a ponytail that went all the way down her back. Half Japanese, Half Scottish American, she had enlisted from her hometown of Savannah, Georgia. Col. Mountel called her into his office and informed her that he had a special job he wanted her to do for a secretive new unit.

"Mountel loved me," Katie recalled in an interview with Connecting Vets. "You get hit on by so many people...Mountel never hit on me. He was so nice to me. I was like a daughter or granddaughter to him. I was like 19 or 20 at the time."

The idea was that Katie would be trained alongside the Blue Light assaulters and in the field, she could disguise herself as a nurse or an airline stewardess in order to gather intelligence during a hostage scenario. The men were skeptical of her at first. This was a brave new world for them, in a hyper-masculine environment that did not permit females to serve in combat positions.

Just taking a shower after morning physical training became a controversy. Someone made the decision that she should be allowed to shower first before the men and that upset some of them. When she came walking by on her way to the showers, "the guys were wagging their dicks at me, it was immature. I mean really guys?" Katie remembered. "I grew up with three older brothers so I was used to it. It didn't bother me in the least."

Eventually, the male soldiers came to respect Katie as a valuable member of the team. “Having a woman was a big deal because she can do things I never could. She was switched on, a sharp lady,” Carlin said.

She said the troops in Blue Light treated her fairly and respectfully after the initial shower incident. “These men protected me, they wanted to protect me," she said. They nicknamed her "Mackie", or "Little Mack", or "Big Mack" depending on the day.

When Blue Light's Sergeant Major was asked about Katie his immediate response was, “She proved to be a hell of an asset."

Once, some dignitaries came out to visit Blue Light for a demonstration of their capabilities. "They had me wear a dress because they had Roger come rescue me," in the scenario she said. Roger, a burly Green Beret, threw Katie over his shoulder and then they were exfiltrated by helicopter, dangling underneath it in STAbilized BOdy or STABO extraction harnesses.

Perhaps it was the tough training that helped the Blue Light members form a tight relationship. As America's only dedicated counter-terrorism unit until Delta got off the ground, they had to be prepared to tackle aircraft hijackings and barricaded hostage situations at a moment's notice. Katie was trained to fire the 1911 pistol, M16 rifle, and the Swedish K submachine gun which she really enjoyed. Marksmanship became a passion for her after that. "I have like thirty-something trophies up in the attic," from shooting competitions she said proudly. She also participated in room clearing exercises with the men, developing procedures that would set a training standard for Special Forces in the years to come. And like the other 5th Special Forces Group soldiers, she was airborne qualified and would train to jump into combat with the men. 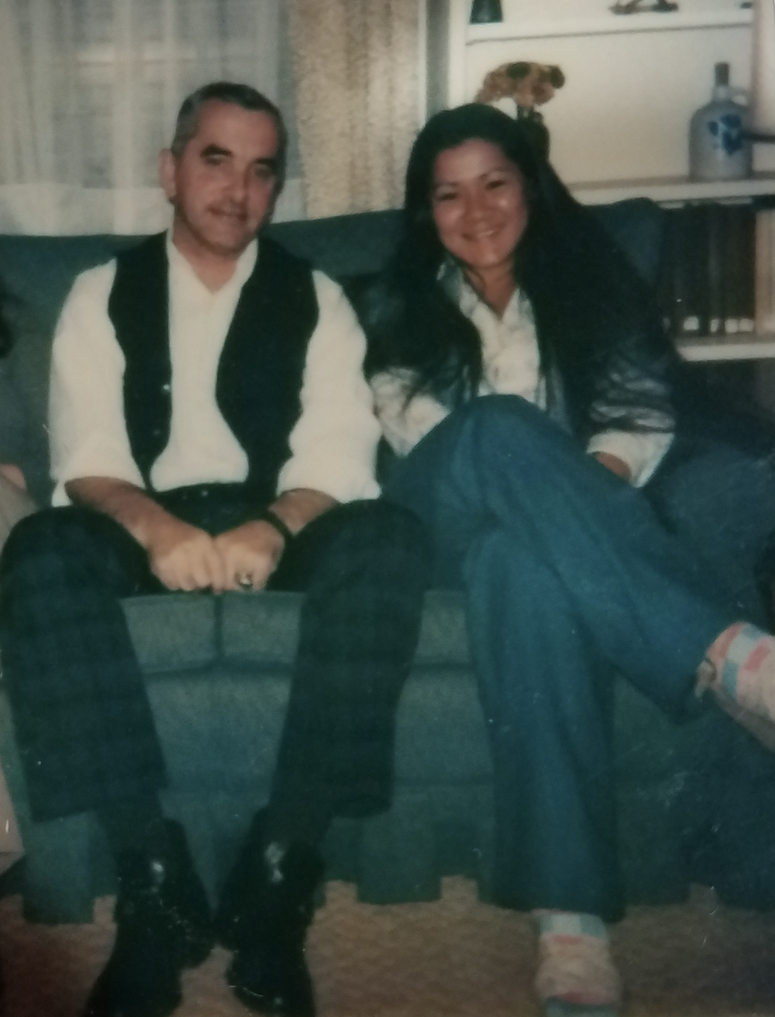 Col. Mountel was adamant that Katie needed to be qualified in High Altitude, Low Opening (HALO) parachuting, a more advanced airborne infiltration technique that is used to clandestinely insert Special Forces teams into enemy territory. Mountel pulled strings and got her accepted into the school.

"I got gigged for getting dragged across the drop zone," she said when her parachute got caught in the wind after she landed.

An instructor drove out to check on her. "This little dick of a sergeant said 'that's another gig because I had to drive out there to see if you are okay' and then he just left me and drove away." For these alleged mistakes she was dropped from the course. "I was told later on after I got out that 'you were not supposed to pass, you were not supposed to make it.'"

By this time, the interim period that Charlie Beckwith needed to get Delta Force up and running was close to being over and Blue Light was in the process of standing down. All of the Blue Light members were called over to the stockade on Ft. Bragg where Delta was based for a recruitment briefing. That briefing did not go well. There were long-simmering feuds between Beckwith and the Special Forces community, many of them going back to the Vietnam War. As Beckwith finished his recruitment pitch, he pointed his finger straight at Katie.

"Young lady, I have no room for you in my outfit," he said.

Colonel Mountel called her to his office, feeling bad about how things shook out with her. He offered her a position as his driver but after serving with a combat unit, Katie felt that she had peaked and could never go back to some sort of administrative job. Mountel's vision and Katie's service were simply too far ahead of their time in the 1970s.

Katie remains to this day the only female ever actually assigned to a Special Forces team, not as an attachment but as a member. This is something poised to change in 2020 as several women are on track to graduate the Special Forces qualification course. If that happens, they will serve as fully-fledged Green Berets.

Katie left the military after her experience in Blue Light. She married a 1st Ranger Battalion soldier named James Bradford who jumped into Grenada in 1983.

In some ways, the path Katie helped chart did end up continuing in Col. Beckwith's unit years later. Delta Force was fully activated in 1980 and by the 1990's the unit had stood up a specialized cell known as the ADVON troop which included a half dozen female soldiers. The ADVON troop has over the years been referred to as Delta's "funny platoon" as it was so unusual in the special operations community where women were, and are, mostly absent. These women were put through their own assessment and selection which was held in Seattle, Washington and Washington, District of Columbia.

"They came in originally as intel gatherers and they continued to do that but the focus of why they were there was that they were to set up a profile, to break up the profile of a single badass dude or two or three poking around," retired Delta Force operator George Hand told Connecting Vets.

Hand served on the troop as one of the male operators assigned to it at one time. "So the women could step in and break that up. That's what two of them did with me in Bosnia for three months each, they would sit in the passenger seat while I did all these recce missions."

Hand said that in addition to breaking up his profile as a lone operator, they could also pick up on additional details and help him with his recon missions.

However, it wasn't always smooth sailing. "There were believers and non-believers in the unit," Hand said when it came to the ADVON troop. During a training exercise, one of the female soldiers did a recon mission and then came back to brief the unit on what she had observed. After she finished, the well respected senior sergeant in charge told her, "I'm sorry, I'm just not a believer."

But times change, and during the Global War on Terror the women in the ADVON troop took on much more provocative roles in active war zones. Some of those missions remain as little more than rumors, myths, and whispers in team rooms until a day when they are declassified.

In 2015, DOD opened all combat positions across the military to women, completely lifting previous gender restrictions. For the first time, women were eligible to serve in front line combat positions in the infantry. Women could now attend Special Forces Assessment and Selection (SFAS) or the Basic Underwater Demolition/SEAL course that would qualify them to become a Green Beret or a SEAL. Over the last five years, several dozen female soldiers have graduated from the Army's Ranger School at Ft. Benning, Georgia. Several women have passed SFAS and are in the Special Forces pipeline, attending the Special Forces Qualification Course. If they graduate, they will be assigned to Special Forces teams and deployed, likely to combat zones.

Today, Katie and her husband run a small business as a sprout wholesaler for local restaurants in Georgia. While Katie was a trailblazer in so many ways, she has mixed feelings about women serving in combat positions today.

"More power to them I'm so proud of them," Katie said. "What they are going through to go to these schools is so hard. I just don't think they need to be in combat positions. I'm old school probably, hell I'm 62 years old. It's not that women are incapable, but because they are there with men and men are protective of them and want to take care of them. She could be the team leader or whatever but they are going to watch out for her because she is a wom