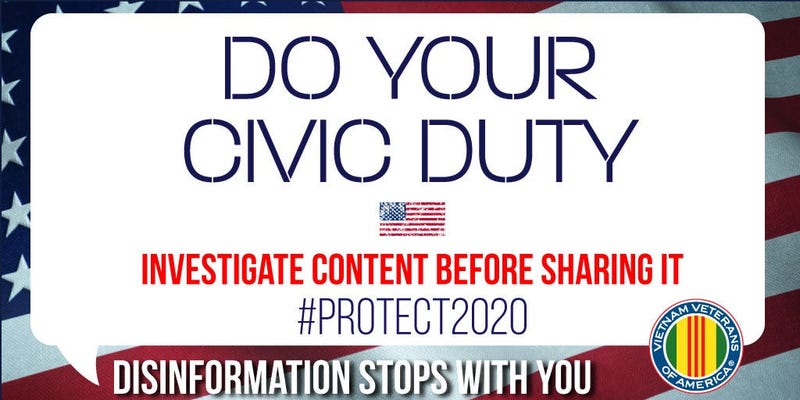 After a two-year investigation revealed malicious foreign entities targeting veterans, service members and their families online, Vietnam Veterans of America and the Department of Homeland Security are joining forces to fight disinformation.

VVA is partnering with the Cybersecurity and Infrastructure Security Agency (CISA) at DHS to release a series of public-awareness products designed to help veterans -- and other Americans -- identify disinformation and prevent it from spreading, according to an announcement from the group.

Those products will include posters and other resources, some of which are already available on VVA's website, and will be sent to the veteran service organization's members and partners -- part of a broader effort to tamp down on disinformation. 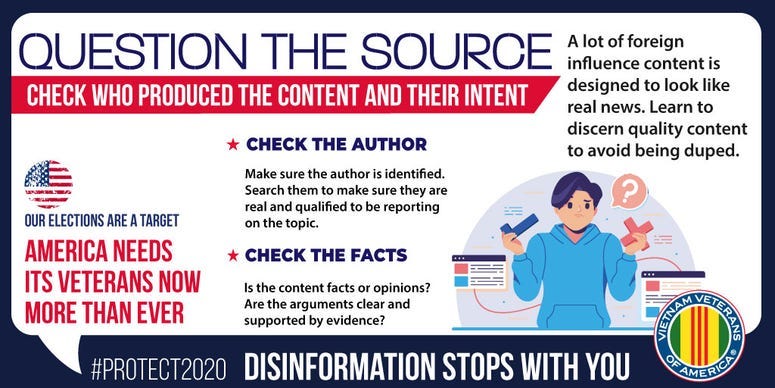 Veterans and service members were specifically targeted as part of the foreign misinformation schemes because they're recognized as trusted, influential or leading members of their communities.

Following the report, Goldsmith said VVA reached out to federal agencies hoping to launch such a campaign, but never received official responses, including from the Department of Veterans Affairs.

"The VA just totally ignored it," he said.

Then, earlier this year, DHS asked for VVA's help to create the education campaign to make "veterans more resistant to disinformation campaigns, to fight against foreign influence."

"This is a natural fight for us," Goldsmith said Monday. "All of us who served our country tend to, in our civilian lives, find a way to serve. A lot of veterans are geared toward a life of service. What better portion of American society to have on the front lines of fighting foreign influence campaigns than veterans?"

VVA National President John Rowan credited Goldsmith with the groundbreaking work that attracted federal attention and launched the partnership, adding that his organization is uniquely positioned to help address issues like this.

"We were very concerned because (the foreign entities) were using us, or Vietnam vets," Rowan told Connecting Vets Monday. "We raised hell. A lot of Vietnam veterans are on the internet now. It's really a part of the social fabric. When people try to come around and mess around with that, either through criminal activity or this erroneous political nonsense, we have to do something about it. And we were lucky to have Kris on our side to lead it."

But with the campaign launching just barely a week ahead of the election, Goldsmith and Rowan said the real difference it will make will likely be long-term.

"It's far too late (for this election)," Goldsmith said. "This is something we need to keep working on for the foreseeable future. Disinformation campaigns are going to be part of our society from now on; they're a byproduct of the internet ... I hope that other veteran service organizations see this and recognize an opportunity for them to get involved."

"It's prime time right now," Rowan said. "So we hope it will get attention even this close. But it's not going to end just because this campaign ends. We don't see this as a one-and-done. We're hoping this generates enough interest that people like Facebook and these other companies are more cognizant of what's going on and we can work with them to make sure they clean up their act. If anything, it's going to get worse unless they really put a clamp down." 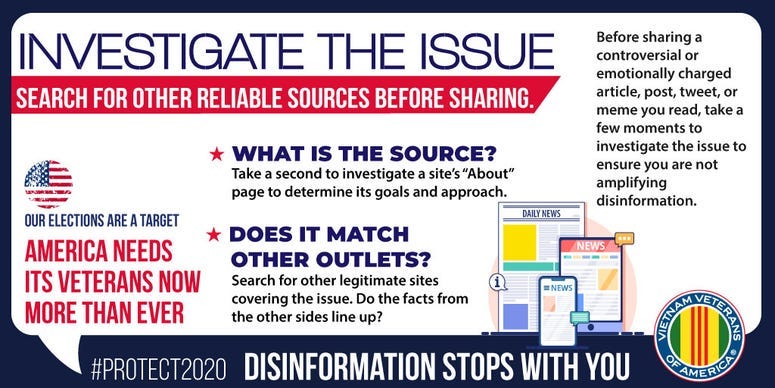 The partnership is key in boosting that message, though, Rowan said.

“Foreign adversaries continue to seek ways to divide Americans and spread disinformation in an effort to undermine faith in our democracy,” Matt Masterson, CISA senior cybersecurity advisor, said in a statement. “The strongest defense against disinformation is an informed public, and by working with VVA, we will be able to reach more Americans and arm them with what they need to spot and stop disinformation. Our veterans have always stepped up when called upon, and once again, they can play a crucial role in defending our democratic process from foreign interference.”

Rowan called the partnership a "vital endeavor to continue our work of defending the United States that we started so many years ago while in uniform.

"We encourage all veterans to take note of the tools provided and to use this information to combat foreign interference from wherever it comes," Rowan added. "This is psychological warfare taken to an extreme, and it impacts our National Security."

Previously, lawmakers called on social media titans Facebook and Twitter to do more to protect veterans, service members and their families from these attacks and impersonations. Senators also called on Department of Veterans Affairs Secretary Robert Wilkie to do more at VA to defend veterans against online threats. VVA reached out to the White House, asking that it take action to protect against campaigns in North Macedonia to trick President Donald Trump's supporters into sending their political donations overseas. 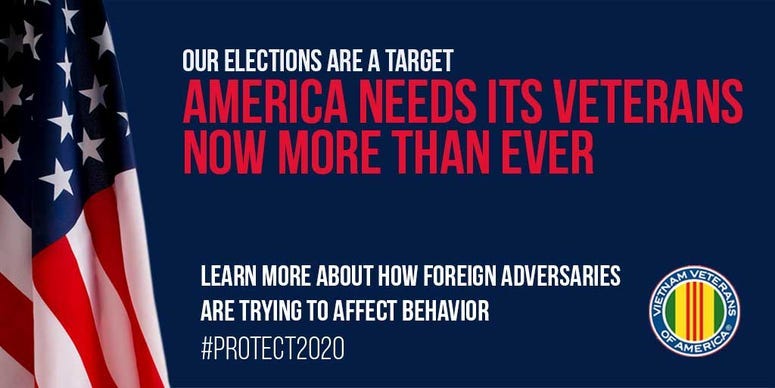