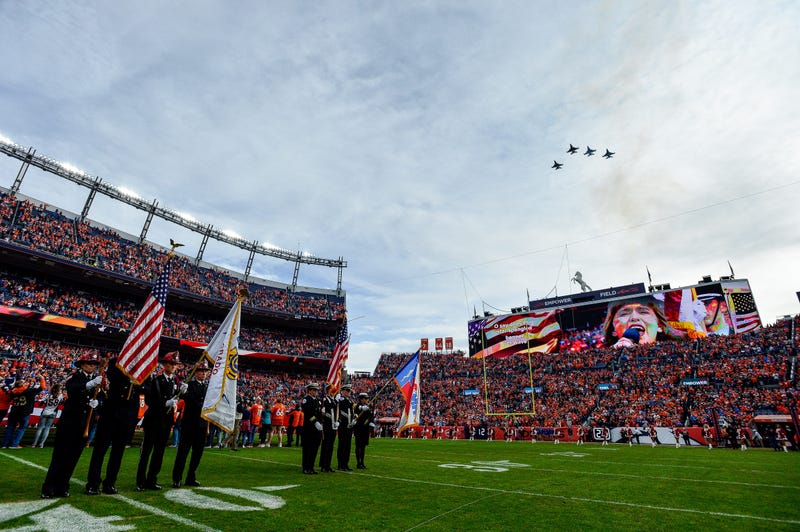 Fox Sports anchors Joe Buck and Troy Aikman said some disparaging things about the military flyover before the Packers-Buccaneers broadcast on Sunday -- and it's raised some questions about who exactly those flyovers benefit.

Even Joe Buck and Troy Aikman find pregame flyovers to be a little much these days: https://t.co/0IZL6GhmZy pic.twitter.com/G4EpB3SYtN

"That's a lot of jet fuel just to do a little flyover," Aikman can be heard saying. "That stuff ain't happening with (a) Kamala-Biden ticket, I'll tell you that right now, partner."

"That's your hard-earned money and your tax dollars at work," Buck added.

Buck and Aikman don't appear to have military backgrounds, so perhaps they can be forgiven for their lack of understanding about mandatory flight hours. The broader issue of sports, the military and politics isn't new.

Politics and the military have been woven into sporting events for decades. But just because they've been around for a long time doesn't mean they still serve the same purpose.

After the attacks on 9/11, a military presence underlined almost everything in the U.S. -- including sports. Today, that militarization remains and military flyovers provide feel-good moments for patriotic spectators, allow pilots necessary flight hours and supposedly have positive impacts on recruiting.

Depending on the number and type of aircraft, these less-than-30-second flyovers cost tens of thousands of dollars in flight crew hours and fuel. To fly the Navy's Blue Angels -- the team that conducted the 2008 Super Bowl flyover -- costs around $60,000 per hour. The 2008 Super Bowl was held in an indoor stadium -- no one at the game saw the flyover. But television viewers did for around four seconds.

If there are additional bells and whistles such as paratroopers dropping onto the field or parachuting down, you can expect that will show up on the itemized bill as well. The Department of Defense, of course, is picking up that tab -- which means taxpayers are picking up that tab. The DoD has placed spending caps on how much can be spent on flyovers -- but in 2018 they significantly raised it in the interest of recruiting. Data on how many sports spectators see a flyover and enlist the next day or even at some point in the future is not available. But pilots need flight time, so at least some of that cash would likely be spent regardless of whether the flyovers happen above an NFL stadium or the middle-of-nowhere USA.

There are arguments to be made about keeping the military at the forefront of the general population's mind -- and the effectiveness with which this can be done at sporting events. The widening civilian-military gap is putting strains on recruiting and those already serving. Flying a loud aircraft for hundreds of thousands of viewers harkens back to the years following 9/11 when patriotism appeared at a near all-time high. But it's been almost 20 years, and, for some veterans, these flyovers only draw attention to the fact that we are still fighting those same wars.

"After more than 5,000 days of American troops in combat overseas, the pageantry has gone as stale as the calcified debate over the utility and execution of these wars," veteran Will Bardenwerper wrote in a 2015 Washington Post Op-Ed.

For other veterans, the flyovers serve a more pleasantly nostalgic experience.

"I like to see the F/18s cause I remember when they were just testing those things," Connecting Vets and CBS Eye on Veterans own Phil Briggs, a Navy vet, said. "We used to watch them hit targets in the ocean ... and when they broke the sound barrier we could really feel it! I’m glad when my kids get to see them."

Without data from the Pentagon, the benefits of these flyovers seem intangible for now, and though they come with high price tags that money may be spent regardless. But tens of thousands of dollars for a flyover is also a relative drop in the bucket for the Defense Department's $705 billion annual budget, so who's counting?

Either way, it's not clear if any of the patriotism pageantry in sports benefit veterans in any direct, tangible way. The NFL's continued efforts to give football a military connotation cost a lot of money -- and none of it goes to the military personnel or veterans it involves.

Reach Elizabeth Howe on Twitter at @ECBHowe.
Sign up for the Connecting Vets newsletter to get more connected to the stories and resources we have to offer.