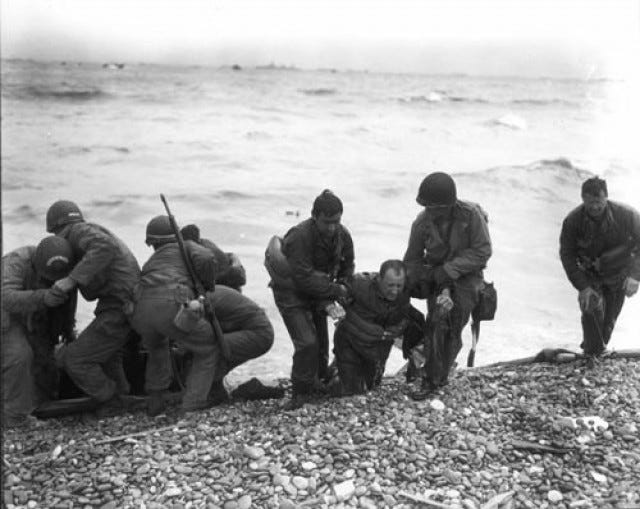 The Friends of the National World War II Memorial released a video Saturday to commemorate the 76th anniversary of D-Day.Hosted by author and Friends board member Alex Kershaw, the video paid special tribute to Army Lt. John Spalding, a platoon commander in the 16th Infantry Regiment, the Big Red One.

COVID-19 restrictions prevented a large-scale commemorative event from occurring at the National World War II Memorial in Washington, D.C. A brief wreath-laying ceremony was held there instead.

Spalding landed on the second deadliest stretch of Omaha Beach. He and the rest of his company were pinned down on the beach by heavy German machine gunfire.

“It took tremendous courage to lead men out of that slaughterhouse,” Kershaw said.

Spalding was 29 at the time, married and hadn’t seen his child in a couple of years. Prior to the war, he was a sportswriter for a newspaper in Kentucky.

Without visitors, the World War II Memorial is being overrun by weeds

“He was the first American officer to lead Americans off the bloodiest beach on D-Day,” Kershaw said. “His courage, his integrity, his guts made a big difference,”

Spalding not only survived D-Day but went on to fight in other battles before being pulled from the fight due to mental and physical exhaustion. He would suffer from post-traumatic stress for the rest of his life.

“It wasn’t just Spalding who gave his life,” Kershaw said. “It was countless thousands of Allied troops who gave everything, including their lives, to liberate Western Europe on what was called the `Longest Day.’”

More than 225,000 Allied troops were killed, wounded or went missing during the operation.