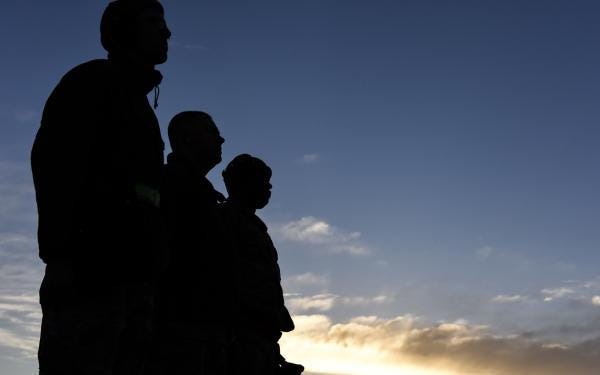 "Soldiers do not leave the fallen behind in battle and we should not do so at home."

Those were the words of U.S. Rep. Gwen. S. Moore, D-Wisc., in a letter to fellow members of Congress when she introduced the “Corey Adams Searchlight Act” also called the “National Green Alert Act of 2019.” Moore introduced the bill to the House after another version establishing an Amber Alert-like system for missing veterans was successfully implemented in her home state.

Corey Adams was a 45-year-old U.S. Air Force technical sergeant who served in Saudi Arabia during the Gulf War and later in Afghanistan and had been diagnosed with post-traumatic stress disorder.

In March 2017, Adams went missing and was found dead 18 days later. Though Adams’ family reported him missing within hours of his disappearance, Adams did not fit the criteria for a “critically missing person” and law enforcement could not issue alerts such as the Amber Alert for missing children or the Silver Alert for missing senior citizens and those with mental disabilities. Law enforcement did not begin a formal investigation into Adams’ disappearance for eight days.

“He's my son. He's my oldest child,” Adams’ mother, Gwendolyn Adams said, according to Fox6. “And so I said, 'I have to do something to honor my son's name.' I wanted to make sure that this didn't happen to another family. I was angry, and I knew I needed to focus that anger in a positive way.”

Adams’ family started at the state level, where Wisconsin Sen. LaTonya Johnson helped them introduce and later pass a Wisconsin Green Alert bill to establish a communication network that sends out statewide alerts for missing at-risk veterans like Adams.

Wisconsin’s veteran suicide rate is more than double the state and national suicide rates. In 2014, out of 736 reported suicides in Wisconsin, 133 were veterans, ConnectingVets previously reported.

Since the Wisconsin system came online, it’s been used seven times, and six of those seven veterans have been found safe, Fox6 reported.

“When Corey Adams went missing, his family knew that something was wrong—Corey left his eyeglasses, phone, money, and medications at his parent’s home, where he was last seen. Despite his family filing a missing person report within hours of his disappearance, it took eight days before the police determined he met the critical missing persons criteria. On April 7, 18 days after his initial disappearance, Corey Adams’ body was recovered from a pond in Dineen Park, just one mile from his mother’s home,” Moore wrote in her letter to members of Congress.

The bill would create a Green Alert program at the Department of Justice to support state and local efforts “to locate and bring our missing veterans home safely,” Moore wrote.

The bill also would direct the Justice Department to coordinate with other agencies and help local search efforts.

The bill was introduced in 2018 but did not clear the House, Senate or president’s desk before the session expired. It was reintroduced in both chambers in 2019.

Since the bills were re-introduced, the House version of the Green Alert bill was passed to the Subcommittee on Crime, Terrorism, and Homeland Security March 25 and the Senate version was sent to the Senate Committee on Veterans’ Affairs March 7.