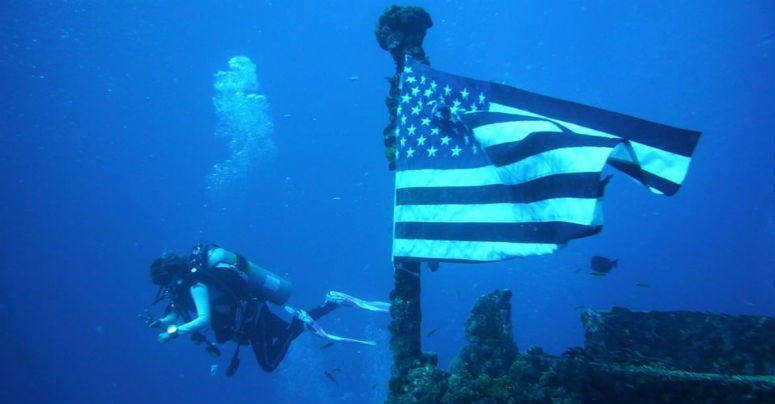 Looking to improve your physical and mental well-being?

Sucba diving surrounds you with a "quiet calmness that is hard to describe," he continued. "It is not silent, but it is not overwhelming your senses either. "

Whiteman said that one of the few things that divers do hear while underwater is their own breathing through their air regulators.

"Your senses seem to relax due to the lack of overstimulation from alarms, text messages, music, car noises or any of the million other things that overhwlm you on land," he said. "And that quietness and serentiy is helping alleviate PTS symptoms, anxiety and depression in veterans."

"You are literally at one with your environment," Whiteman continued. "The environment warmly welcomes you to visit and stay. There is no judgement or sterotype being held against you."

Scientific studies are backing up the antecdotal evidence that scuba diving helps control PTS. According to a 2011 study by Johns Hopkins University, a small group of veterans with spinal cord injuries who underwent a four-day scuba diving certification course saw significant improvement in muscle movement, increased sensitivity to light touch and pinprick on the legs, and large reductions in post-traumatic stress disorder symptoms.

Stephen Bradford, co-founder and secretary of HSG, is an Army vet who has been teaching scuba diving since 2005. He said the sport helps him to minimize his PTS, anxiety and depression.

HSG co-founder Brandon Seibert has been using scuba diving to control his PTS symptoms since 2008. He said as veterans go scuba diving with HSG, they are also reporting feeling better.

“We can also provide that feedback to other groups and hopefully get them to collaborate on research together,” he said. “Once they have their research completed, it can be peer-reviewed and verified. That can serve as proof for backers to fund scuba diving for therapy and not just see it as a vacation.”

Can magnetic therapy help with depression by rebooting the brain?